Abel Maldonado's vote gave California a budget, but shrank his own 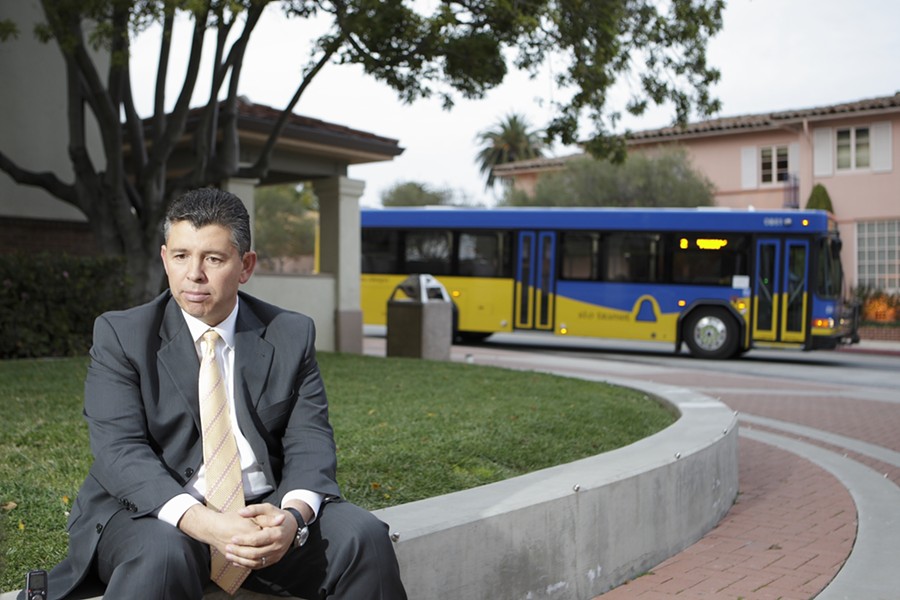 Sen. Abel Maldonado arrives to an interview without an entourage, only his family in tow. Maybe it’s fitting: He doesn’t have many Republican friends in Sacramento lately. His vote ensured that the Senate would pass a controversial budget that also came with more than $12 billion in tax increases. That vote has won him praise, and the wrath of his own party.

Maldonado, a moderate Republican representing the Central Coast, broke one of the cardinal rules in his party: never increase taxes. He described the mindset of his party as “the party of no.” No tax increases, ever, and party leadership made the message clear.

State Republican leaders swiftly punished Maldonado and five other legislators who voted in line with Democrats. Maldonado was almost publicly reprimanded for his vote (censured); instead, he lost access to party funds.

“What they’re saying to anybody that donates to the Republican party, ‘We’re only going to give money to people that we can manipulate,” Maldonado vented to New Times.

Backlash over the budget vote goes beyond fundraising. Maldonado hate sites have already sprouted online. There is a “Never Elect Abel Maldonado To Anything, Ever Again” Facebook page with more than 600 members. Another website is accepting donations for a “recall Maldonado” effort.

As the Legislature debated how to fill a $40 billion deficit, California’s bond ratings plummeted and confidence in the state’s economy dwindled. The state was on the verge of sending out IOUs instead of checks. Though far from perfect—or, far from beautiful as Maldonado puts it—his vote secured a budget. But the personal cost for Maldonado was severe. Asked if he feels separated from his party ideologies now, he said simply, “I do.”

Fellow Republican Sen. Dave Cogdill was voted out as minority leader for supporting the budget. Still, Maldonado said he feels particularly picked on. When he walks through the long marble halls of the Capitol, he said, things are different, his relationships have suffered, “and that’s all you have in Sacramento.”

Maybe it’s because he has nothing to lose, or that he now has a platform with which to raise his voice, but Maldonado’s tone and stern expressions seem to say: To hell with them—it was the right choice.

“I’ve got some rebuilding to do. But during the rebuilding process they’re going to come to my side; I’m not going to their side.”

Years back, Maldonado signed a no-new-tax pledge, something he seems now to regret, “because it should have said no tax increases unless there’s an emergency.” He described the Republican alternative to this year’s finances as one that would “decimate” state programs.

Now, for better or worse, Maldonado’s name is becoming more well-known, if not infamous. Former San Francisco mayor and legislator Willie Brown called him the most unpopular politician in Sacramento in a San Francisco Chronicle opinion piece. The Economist got him international recognition for being one of the few Republicans who would break party ranks.

Even as the senator sat on the steps of the SLO City Hall during an interview, a man walking by shouted at him: “Abel, get ’em shaped up, up there. Get Sacramento shaped up.”

Maldonado provided Democrats the long-sought two-thirds majority that was needed to pass the budget. Admittedly, he could have haggled an attractive concessions package for his vote. He was offered committee chairmanships, a new larger office, and other perks he declined to detail. “They offered me the world.”

What he got for his vote was the removal of a 12-cent gas tax and $1 million worth of furniture from the Controller’s Office budget (the state controller said money was needed to comply with the Americans with Disabilities Act), a ballot measure that would ban legislative raises during deficit years, and a ballot measure to create open primaries in California.

Conversely, he said, Republicans were willing to just sit idly for political gains and let the state go into bankruptcy.

“Well, they wouldn’t say it in public, but they would sit in committee hearings in our caucus and say, ‘You know what, Abel, why do you want to vote for this? Let’s let the state go off the cliff; let’s let the state go into bankruptcy to prove the other party was wrong all these years.’ And I was not going to hold the people of California hostage and I was not going to bankrupt the state.”

If his vote to approve the budget only earned him enemies right of center, the things he added in the budget likely riled members of both parties.

He spoke extensively and excitedly of ending the hyper partisanship in Sacramento. If nothing else, Maldonado’s ostracism seems to have given him an example of how Sacramento handles its defectors.

The message seems clear from Maldonado’s perspective: moderates are not welcome. He said his early introduction to state office was, “Take your local government hat off, you’re  in the Senate.”

And if Republican moderates weren’t scared off before, they probably will be now after Maldonado’s fall from grace.

“It sends the wrong message to anybody that wants to go up there and really focus on public policy that benefits all Californians.”

As for Abel, he has three more years in the Senate—maximum. Term limits prevent him from running again. If his party has its way, however, those will be his last three years in politics.