Multicultural cuisine pops up in Benny's Kitchen, a few hours at a time

Look for Bap Jo and Hawker's ever-changing menus and updates on Instagram @bapjokorean and @hawker_eatz, respectively. Bap Jo is in Benny's Kitchen every other Saturday afternoon with its next shift on Nov. 7. Pre-order for pickup at bapjokorean.com. Hawker is in Benny's every other Wednesday afternoon with its next shift at Benny's on Nov. 4, at Liquid Gravity on Saturdays, There Does Not Exist on Sundays, and looking for other breweries in need of Asian street food. Contact John Mercurio at johnmercurio@hawkerslo.com. For more info on Benny's Kitchen, look for @bennysslo on Facebook or email bennyskitchenslo@gmail.com.

Kimchi was just the beginning of Matt Yoon's journey into making the food he grew up eating.

Raised in Orange County with homecooked Korean food, Korean restaurants close by, and Korean grocery stores, San Luis Obispo seemed like a Korean food desert to Yoon, who started making kimchi while he was working at Cal Poly in 2017.

"I was really missing it," Matt said. "I wasn't going home regularly, and I was like, 'Man, this sucks,' so it was out of necessity."

He expanded his repertoire beyond the spicy, fermented cabbage, garlic, green onion, and radish accompaniment to any Korean meal, eventually wooing his now-wife with bibimbap, a rice dish served with meat, veggies, and a lip-licking spicy/sweet/savory sauce.

Hope worked at Sally Loo's at the time. She wasn't looking for anything serious because she had just gotten out of a relationship, but he dropped the food off for her, so how could she say no. It was the first time Hope, who grew up in the Central Valley, had ever eaten Korean food.

"Me and the owner Jenny were in the back, and I took this first bite, and I was just like, 'Oh my gosh,'" Hope said. "It was something that I knew everyone would love."

Eventually, Hope said, Matt was making meals for her weekly.

"And everything he made, I was like, 'This is ridiculous, you have to sell this,'" Hope said.

The couple got married in December 2019, and Matt started dishing up some carefully selected Korean fare on the side at Sally Loo's as the pandemic ramped up. Sally Loo's kitchen had reduced the hours it was open, and Jenny Fullarton let Matt and Hope start using the kitchen in the afternoons. Hope said Fullarton charged them low overhead and gave them full use of the kitchen, which really helped them figure out how a pop-up style restaurant could work. As Sally Loo's started to transition back into using the kitchen more, the Yoons were ready to venture out.

Now, Bap Jo: Korean Street Food is dishing out an ever-changing experimental menu of Korean-inspired dishes such as Korean hot fried chicken, marinated beef kalbi ribs, and kimchi fried rice out of Benny's Kitchen every other Saturday. And that's exactly how the Yoons, who both have other full-time jobs, want it.

"Leasing a place in SLO is so expensive, so I think we really wanted to focus on the food, and focus on doing the food well," Matt said.

Instead of worrying about everything that goes into owning a restaurant, the couple can dive into their passion—the food. Leasing a restaurant space in SLO can cost between $2.50 to $3 a square foot per month: A recent Rossetti Company listing on Marsh Street asks for a price of almost $10,000 a month for 3,600 square-feet. Then, there's the expense of kitchen equipment; dealing with tables, chairs, and wait staff; and being on the clock all day, every day.

"How do you even do well in such a small capacity when the barriers are so high?" Matt asked. With Benny's, "We're able to turn a profit."

Benny's Kitchen—of Benny's Pizza fame—is a commercial kitchen that licensed food purveyors can use. Ben Arrona, who's currently at Oxford University getting his Ph.D. in global and imperial history, rents his fully equipped kitchen out for about $20 to $30 an hour. Commissary kitchens like his are most often used by catering and food truck companies to prep and cook food they take out to events or sell out of the truck.

What's unique about Benny's commissary is that it's zoned for take-out, allowing pop-ups such as Bap Jo to actually serve to-go food to customers. Bap Jo, Hawker Asian-style street food, and a handful of others are using it to bring a little multicultural flare to San Luis Obispo's small city streets.

Arrona said he's still planning to dish out his Detroit-style pizza every couple of months when he comes back from England for a visit—for instance from Dec. 10 through the end of January. But he also wants the kitchen to be used as a spot to give the SLO community those flavors that it can't get anywhere else and as a place to help budding food entrepreneurs get their aprons dirty without going into massive debt.

"This is an opportunity for someone to come in, and for a small chunk of change each month, it's an opportunity for them to build some wealth and also spread their food throughout the community," Arrona said. "To give people a chance to get their cultural food out to the public."

They come into a fully loaded commercial kitchen, pay their hourly fee, cook and sell their food, clean up, and leave. John Mercurio of Hawker said he and his business partner, Chad Riley, decided to open a food business after losing their restaurant jobs to COVID-19 shutdowns. Using unemployment money as investment funding, the pair started Hawker a couple of months ago as a way to meet a unique need during the pandemic: breweries looking to serve food with their beers due to COVID-19 requirements. 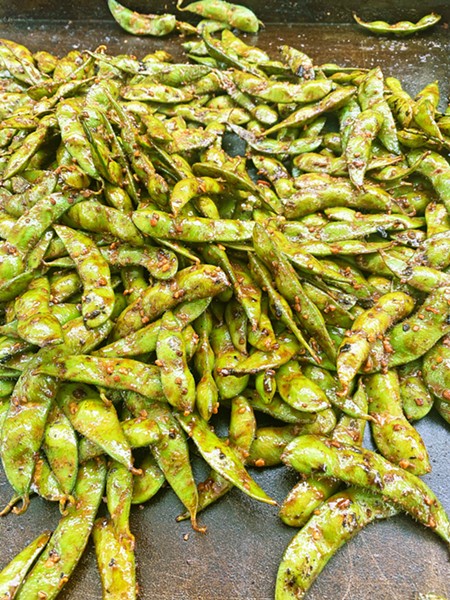 So far, Hawker's hooked up with Liquid Gravity on Saturdays and There Does Not Exist on Sundays and serves pop-up style out of Benny's Kitchen every other Wednesday. Cooking up Asian-style street food, Hawker's changing menu includes dumplings, pork belly sliders, char siu pork belly fried rice, and spicy garlic edamame. Similar to Bap Jo, Mercurio said that Hawker is constantly experimenting with flavors and new items.

Mercurio moved to the Central Coast from the Bay Area when he was in sixth grade. The Bay, he said, does a lot of Asian-style street food, but SLO doesn't really do much. A lot of people are cooking up burgers and Mexican food, so Mercurio said they decided to try something different.

The goal, eventually, is to get a food truck going, Mercurio said. And he has high hopes.