The half-dozen or so acoustic musicians who tote guitars, mandolins, and the occasional fiddle into the cozy confines of San Luis Obispo's Utopia Bakery one Sunday afternoon each month charge nothing for their playing, and neither does owner Kees Docter. With stutter starts and discussions about who knows which songs, it's more of a jam session than a performance and the musicians are strictly sworn to play only old-timey standards and avoid copyrighted songs. 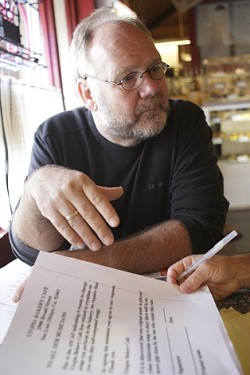 # But none of that has stopped the lawyers at royalty music licensing industry giant ASCAP from calling, visiting, and sending letters that demand that Docter pay $383 per year simply to ward off the possibility that somebody, sometime might slip in an ASCAP-protected cover song that could expose the bakery to a healthy fine.

"As a business owner, this is my No. 1 frickin' headache," the ruddy Dutch baker fumed as he waved a stack of lawyers' letters in the air. "This is such bologna."

Docter, for one, isn't paying. He said he'd rather shut down the Sunday performances, if it comes to that, than capitulate to what he considers an unjust demand. But the choice whether to fight or pay

is one being faced by many other area businesses that offer live music.

ASCAP, along with fellow music licensing companies BMI and SESAC, collects fees from businesses that play commercial-free or live music of copyrighted songs. The fees are then paid as royalties to songwriters, publishers, and composers.

Suzanne Stadler, a co-owner of The Porch coffee shop in Santa Margarita, which offers live music on Fridays, said she's received her own stack of lawyer letters most of them from BMI along with near daily pressuring calls over the issue.

Even though she instructs her musicians to play original songs or those that predate copyrights, she's reluctantly considering paying up. She figures that if she pays all three companies, it will cost about $1,000 per year. Even though she doesn't charge for the performances, Stadler said she figures the roughly $20 per week cost would be worth the ability to continue to offer music hassle-free, and without the threat of fines that she's been told could reach $20,000.

"I don't like the principle of it that's what bugs me," she said. "It's extortion on a minor scale. It makes me think of the mafia."

Jim Steinblatt, an ASCAP spokesman, said fine-seeking lawsuits are "the last recourse," for the group, and that's why representatives push hard for licensing agreements.

"I'm sure the bakery owner likes music," Steinblatt said, "but he also probably hopes it brings people into his establishment."

Finally, Steinblatt said the licensing fees are priced to reflect the size of the venues and how often live music is performed.

He compared going without a royalty license to cheating on taxes. "If you want to take that risk, go ahead," he said, "but know you may well get caught. We basically sue people every day we have that obligation to our members."

A BMI pamphlet that's been sent to businesses along with letters seeking licensing agreements emphasizes:

That licensing saves businesses time in tracking down original composers to get their permission for each song performed.

That purchasing a CD does not give a business owner permission to play it "publicly," including in their business.

That live music is considered "public" whenever the general public is in a position to hear it.

It's unclear exactly how the licensing companies locate which businesses to target with letters.

Docter said he was told by an ASCAP representative that he simply read the music listings in New Times. Calls to numerous other businesses who offer live music, however, found several who said they've never been approached by the companies.

Roger Siminoff, a banjo maker from Arroyo Grande and founder of Pickin' Magazine and Frets Magazine, said that while ASCAP and the others perform an important service in policing the royalties of songwriters, he questions whether they sometimes go too far.

"Does it mean that every time someone performs a lullaby to their child that they should be paying a royalty fee?" he wondered.

"If someone is playing at a cafe especially if they're not being paid to do this in my opinion that goes a little bit above and beyond what I think is reasonable for ASCAP to be policing," he said.

For Docter, who opened the popular SLO bakery after growing tired of the travel involved in being a food scientist, the whole issue has him alternating between throwing up his hands in defeat and buckling down to keep fighting.

So far, he's made each of the musicians who plays sign a statement pledging not to play copyrighted music, but ASCAP has responded that they may send representatives to the Sunday sessions in a sort of sting listen-in for any violations.

"If they do visit me and say 'You are in violation,' I say 'That's it no more music' and I'll tell the musicians 'Don't complain to me, go tell ASCAP.'"