What would the holidays be without a melancholy voice dreaming of a white Christmas, or the cheerful proclamation of “joy to the world,” or an endless and sickeningly smug list categorizing presents from a true love? And if you’re willing to pass a holly jolly evening at the Clark Center in Arroyo Grande (Dec. 17) you’ll get to hear about holy nights, promises that a loved one will return home for Christmas, guarantees of a merry little Christmas, and selections from Wicked and The Phantom of the Opera besides.

The three Christines—sopranos who professionally performed the role of Christine Daaé from The Phantom of the Opera more than 4,000 times cumulatively—have been performing together for seven years under the billing of The Phantom’s Leading Ladies. But when the holidays come a-calling they shelve their standard repertoire of Broadway hits in favor of music with a decidedly seasonal flavor. 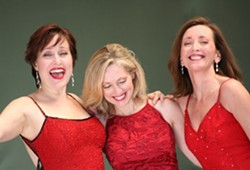 “Music can evoke memory, just like how smelling a pumpkin pie baking at any time of the year can make you immediately think of every Thanksgiving you’ve ever had,” said Mary D’Arcy, one of the three Christines, and the only one not to hail from the Golden State. “Songs that we hear from our childhood are representative of happy, joyous times. Music evokes those sense memories.”

According to Teri Bibb, the group was founded when she and Karen Culliver lived in Los Angeles. They knew each other from their tenure as one of Broadway’s best loved heroines—both performed the role in the first national tour of the show, which kicked off in Chicago, and Culliver had also performed the role in San Francisco. And contrary to the commonly held stereotype of female singers as attention-starved divas, the Christines found themselves relishing the interaction after decades-long solo careers.

“We’re not dueling divas,” insisted D’Arcy. “It’s just so darned much fun singing beautiful, intricate harmonies with them.” Bibb added that the years of collaboration, combined with their passion for music, have bonded the performers to such a degree that they are “sisters through and through.”

Given that D’Arcy, Culliver, and Bibb have all assumed numerous roles over the course of their decades-long careers, it bears asking why they chose to emphasize their past history as Christine Daaé in the group’s title. While each woman has a slightly different relationship with the role, they cite the sheer challenge of becoming a character who remains on stage throughout nearly every note, not only singing but acting as well.

“As far as the nuts and bolts are concerned, it’s probably the most difficult role we’ve all had to date,” admitted Culliver, who kicked off her singing career with a gig performing in front of Cinderella’s castle at Disney World.

For D’Arcy, whose stint as Christine comprised the better part of five years and had her crossing borders to perform in Toronto, the rich role is an uncommon opportunity for a soprano.

It doesn’t hurt that The Phantom of the Opera follows a classical plot line, possessing elements of horror, mystery, romance, and tragedy. And the blazing success of Andrew Lloyd Weber’s musical marked a sharp contrast from the trend toward exclusively pop music.

Though the trio is proud of its spectral past, the uncertainty and possibilities posed by the future are equally thrilling. Culliver prefers comedic roles to the serious, tragic tone maintained throughout The Phantom of the Opera. And years of performing with D’Arcy and Bibb have afforded many rich opportunities for humor, including an occasion when the three erupted in a late-night restaurant serenade for the cook and bartender. Decades of experience have also cast the performers in a new age bracket accompanied by an altogether new set of roles. No longer will Culliver’s resume be filled with ingénues. In the vacant space—the stage and spotlight—those characters once occupied, stands a seasoned Culliver, eager to usher in the holidays with humor, grace, and vibrant cheer. Not to mention her two friends and co-stars.

“Turning 40 prompted it,” admitted Culliver. “I was like, ‘Now what do I want to do.’ It’s a little more difficult and there’s a little difference to what you want to do. I didn’t want to play young girls anymore. And part of that transition for me was founding this group.”