Downtown SLO gets a new art supply store, moves an old one

If you’ve taken a stroll down Morro Street recently, you may have noticed that something’s missing. That is, the block that seems to rotate businesses at the rate most people change clothes experienced both a departure and a new arrival. The Jeff Claassen Gallery—in business since 2004—made the move from Morro to Marsh at the beginning of July. And for the first time the commitment-phobic gallery owner—Jeff Claassen, for those of you silly enough to wonder where the shop’s name came from—signed a long-term lease. He rented his previous two locations on a month-to-month basis. While Claassen was vacating Morro Street, fellow painter Neal Breton was moving in, calling his new business San Luis Art Supply.

The move doesn’t necessarily change Claassen’s inventory, but it does allow for some expansion. He has been acquiring furniture, intending to paint and re-sell it, but the lack of space for it was prohibitive. Also, his new Marsh Street digs feature a cozy gathering space with couches and chairs, gathered around a television situated within a former newspaper dispenser; the television plays documentaries about art. It’s a good place to discuss Shel Silverstein’s darker side, or plot creative escapades. And spare space in the back will be converted into a studio so he can move his art supplies out of his living room.

He’s taking on new commissions, working on a claw foot bathtub, and hoping to find someone with a car or scooter in need of
an edge.

“In the last year and a half I felt like I just hit the ceiling over there in terms of what I could do,” explained Claassen, referring to his last space.

And, his new space comes with the potential for larger events, which bodes well for the gallery’s grand opening, tentatively scheduled for Aug. 21; Claassen’s commitment phobia carries over to setting a date for his opening as well so check for potential changes on his social networking site. Store hours are also in flux right now, as he opens and closes at different hours to determine what works best. In all likelihood, he will open earlier than he did at his previous location, and plans to alter his sleeping pattern accordingly. 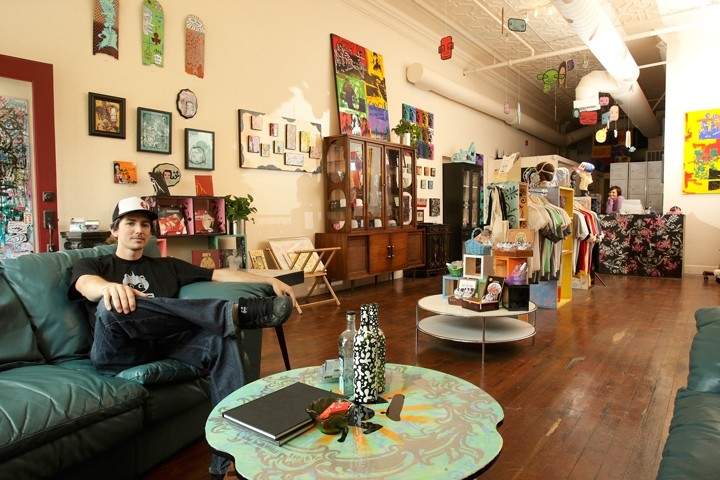 Claassen also plans to break away from the standard month-long art exhibit, throwing one-night-only art parties in his gallery. Gallery wall space is real estate, argues Claassen, and having it tied up in a piece that already sold just isn’t economically sound.

November will mark the Claassen Gallery’s fifth birthday, an appropriate opportunity for Claassen to reflect on his reason for starting a gallery in a city that hemorrhages them.

“The first place, the rent was $300 a month. And I was like, ‘I could risk $300 just to find out if this could work,’” he narrated. “If your art’s on the side, it will always be on the side. I opened the first place when I was 27. I’d had a lot of jobs where I hated waking up and I just thought, ‘fuck it, I’m gonna do what I want because happiness is worth a lot.’”

At the other end of the experience spectrum, Breton is just starting out as a shop owner, fighting with his cash register and cooling his heels the first month and a half or so while he waits for his art supplies to arrive. According to Breton, the reason he’s opening an art supply store is because he’s sick of driving to Los Angeles to buy his painting supplies.

So, his goal is to carry any and all painting materials—brushes, higher-end acrylic and oil paints, and canvases.

“This is a city full of kids who take art classes, this is a county that has semi-professional and professional artists,” he said. “To me, this is a glaring need. I want a decently stocked arts store.”

The grand opening takes place Aug. 15, and customers can expect sale prices during the first month of business. Look for the sign depicting a hand defiantly grasping a paintbrush against a red and blue backdrop, militant, like Breton’s attitude towards art.

Space permitting, the purveyor of artistic wares also plans to exhibit art—his own and that of other local artists. He’s especially interested in cultivating student talent—be the student 6 years of age or 20. But he’s got certain aesthetic expectations of the older painterly crowd. Specifically, his own work runs toward pop contemporary and he has an affinity for street art. Landscapes and still lifes need not apply. 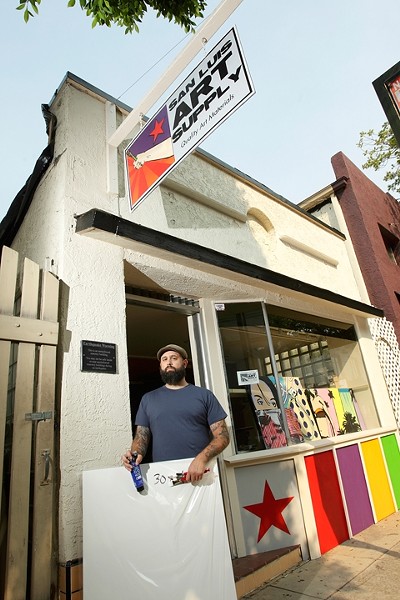 During the store’s first month of life—while he was still waiting for the art supplies to arrive—Breton played host to an inaugural exhibit of the Vagabond Co-op. Organized by Matt Foote and Kris Blaze, the co-op’s stated purpose is to show the artists who have existed at the periphery of the local art scene. Breton had enough space and reasoned that the artists who would participate in the exhibit were likely his customer base.

For artists bleakly considering an endless cycle of day jobs they despise, squeezing in a few hours for their art here and there, Claassen and Breton may have discovered an escape hatch. It’s a scary escape, what with rent and cable bills to pay, but it’s one that Claassen made five years ago and doesn’t regret.

“If I do ever give it up, it would be because some other project came up,” he said. “I think it would be awesome to have a couple of galleries.”

Arts Editor Ashley Schwellenbach defies gravity, and several legal and moral codes. Send a cape, but no spandex, to aschwellenbach@newtimesslo.com.