For many of the Grizzly Youth Academy cadets at Camp San Luis, the 22-week program is a last chance. The 16- to 18-year-olds have dropped out of high school or are at risk of dropping out. Some have had run-ins with the law. Many have experienced broken homes, addiction, neglect, or abuse.

For two days in May, Orchestra Novo conductor Maestro Michael Nowak played recordings of Maurice Ravel’s “Pavane for a Dead Princess” to the 200 or so cadets in small groups, encouraging them to soak in the music and let it inspire them to create paintings. First he’d play a piano version, then an orchestral version, over and over for about an hour. The results will be projected on a screen on Sunday, May 29, in the Performing Arts Center, when Nowak leads Orchestra Novo and guest pianist Marika Bournaki in Ravel’s beautiful 1899 composition. 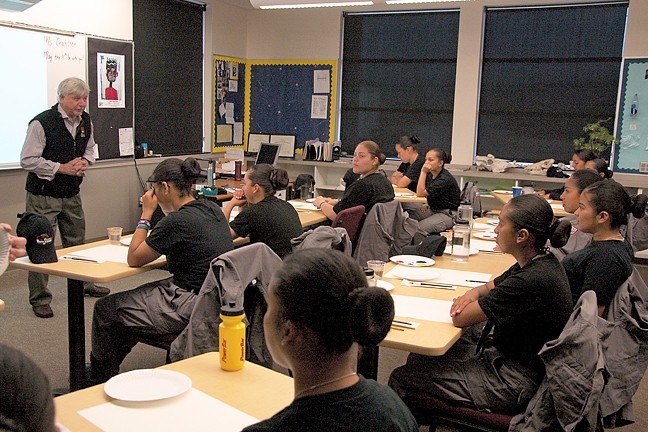 Nowak got the idea for the collaboration from inter-arts creator Bobbi Jo Hart’s 2012 film I Am Not A Rock Star, which for eight years follows Bournaki’s coming of age from a precocious prodigy to a world-class Juilliard-trained concert pianist. In the film, Bournaki performs music for grade school children as they create art.

Two years later, the idea has come to fruition. Nowak contacted Hart and Bournaki, who filmed a special invitation to Grizzly Academy cadets to participate.

“The first thing we had to decide on was what piece,” Nowak explained. “It couldn’t be too long or too short, so the six-minute ‘Pavane’ seemed just right, but then who should we play it for? The subject matter and somber tone seemed a bad topic for little kids, but maybe some older kids would respond, kids who had more experience or had known a sense of loss. I thought about juvenile hall, continuation school, and then ding-ding! The Grizzly Academy! Many of these young people have experienced a profound sense of loss, have felt deep emotions, and have come to the Academy looking for a way out of their troubled lives.”

Nowak was exactly right, and the cadets responded in poignant and profound ways.

“So basically, four years ago in 2012, my brother and my mother were in a car accident, and he’s been in a coma ever since,” one cadet explained in a video created by Nowak’s wife, storyteller Zette Harbour, while holding up a painting of him and his brother with a clock between them. “Basically this is just saying it’s been so long, and it’s hard to keep track of time sometimes, and I feel helpless, which is why I have no hands and no feet, and the darkness feels like it surrounds me sometimes. I see him sometimes in my dreams and it feels so unreal that he’s back, and he always reassures me that he never left. That’s why I painted this picture.”

For many of these kids, this experience was their first encounter with classical music … or at least they thought so. Many were impressed with Nowak’s long career conducting film scores for major Hollywood blockbusters that they’d seen—King Kong, The Kite Runner, August Rush, American Gangster, Life of Pi—which he explained are filled with classical music designed to illicit an emotional response. 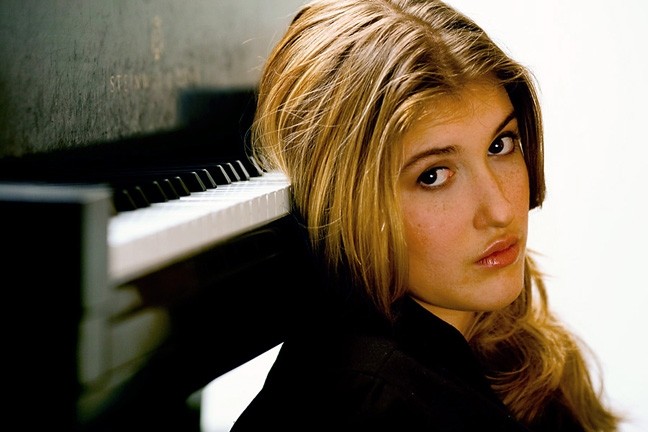 “I had no idea if this would work,” Nowak admitted. “It was music therapy, art therapy, eight classes a day with 25 students per class. I told them to be free, to let their imaginations fly, that there was no right or wrong, just express yourselves. I thought some of the kids might think they were too cool to join in, but we had 100 percent participation.”

Nowak noted that during the solo piano version, most of the kids were quiet and contemplative, but when he played the orchestral version, they became more animated. Many sat without working for a long period and then quickly burst into creativity. Others started creating immediately, as if they were finally released to express themselves.

“When I first started this, I was trying to think of my life and all the ups and downs I’d been through,” Cheyne Poole, another cadet said in Harbour’s video, holding up a colorful abstract design. “The heartbreaks I’ve been through, the straight lines I’ve been through. As I started to get more into it, all the circles I drew, they represent all the mistakes I’ve made, repeated over and over. But as I started to keep going and going, I realized this is art, and that right there—my name—I consider that art. I consider me art.”

This promises to be a powerfully emotional concert.

Pianist Marika Bournaki, Orchestra Novo, and the Vocal Arts Ensemble will present A Triumphant Heart on Sunday, May 29, at the Performing Arts Center (3 p.m.; all ages; students $15, general admission $24 to $50, available at 756-4849 or online at pacslo.org).

The idea was inspired by inter-arts creator Bobbi Jo Hart’s film I Am Not A Rock Star, which will be presented in a benefit screening at the Palm Theatre on Sunday, May 22, at 4:15 p.m. ($15). The film follows Marika Bournaki from age 12 to 20 and culminates as she plays for grade school children as they create original art inspired by her performance. Bobbi Jo Hart will attend and answer questions after the screening.

Glen Starkey is a New Times staff writer who’s not afraid to cry at a concert. Tell him he’s a big baby at gstarkey@newtimesslo.com.