Muthaland by Minita Gandhi is featured at Pacific Conservatory Theatre (PCPA) in rotating repertory along with An Illiad through Oct. 21 in the Severson Theatre, located at Allan Hancock College, 800 S. College Drive, Santa Maria. More info: (805) 922-8313.

Minita Gandhi was always drawn to acting, even as a young girl. But she never thought she would one day be on the stage, telling her own story to a room full of strangers.

"I didn't grow up with the arts as a possible career choice," she said. "It wasn't until later in life that I realized I really loved stories and all aspects of storytelling."

The actress, writer, and director is part of the Pacific Conservatory Theatre's (PCPA) current season, with her one-woman show Muthaland, a personal story based on Gandhi's life and family, which tackles long-kept family secrets and an assault that had a far-reaching impact on the author.

"Muthaland came out of a variety of things, mostly my trip to India," Gandhi said. "I think I just had a story to write and it just came out of me. I never knew I was going to be a playwright until that happened. It's been a magical experience."

The performance—which runs at the Severson Theatre in rotating repertory along with An Illiad through Oct. 21—represents a coming home of sorts for the writer. Gandhi was a student at PCPA's conservatory program from 2004 through 2006. From there, she did an internship with the Milwaukee Repertory Theatre and then moved to Chicago, where she studied and worked for 12 years.

Muthaland represents a long journey for Gandhi, both physically and artistically. The play is entirely autobiographical and tells the story of Gandhi, an Indian-American immigrant, and her attempt to connect with her family's history and learn more about her own identity. In 2009, she went to India for her brother's marriage. 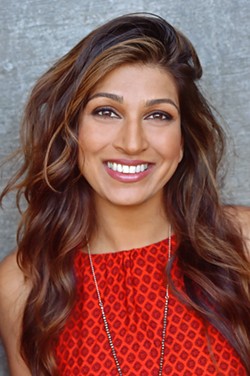 "It turned out to be a really remarkable trip, in terms of getting to know aspects of India in ways I hadn't known before," Gandhi said. "There were some beautiful things."

But it was also during the trip when Gandhi was sexually assaulted while at a meditation center. Gandhi said the aftermath of the assault taught her a great deal about the state of India's infrastructure when it came to combating and addressing rape.

"I came back from India not quite knowing how to heal from it," Gandhi said. "I took a lot of time to heal. I worked with therapists and a lot of friends and family. I think because of my creative background, I needed to create something from it."

It wasn't until 2015 that she was ready to tackle the subject matter as a writer. A theater group in Chicago called Second Story was featuring 15 minute storytelling segments with the theme of justice. Gandhi said because she hadn't dealt with the assault, she never had a chance to delve into the beautiful things she had experienced while in India.

"So I committed to it and I wrote about the assault," she said. "It was really hard, but once I wrote about it, I remember feeling as though I was free to write everything I wanted to write."

She developed the play with Silk Road Rising, a theater group in Chicago that features the work of writers of Asian and Middle Eastern descent. She said that initially, the assault was not part of the play she created; much of the material is a coming-of-age story, as Gandhi describes it, built from interviews with her parents and other personal family stories.

It all started when Gandhi found her father's old suitcase.

"It was from his very first trip to the United States when he was in college," she said. "He had come over on a ship with one suitcase and $8. I realized I didn't really know my parents as anyone other than my parents."

She ended up paralleling their story with her own, working on the production at Silk Road in 2015. Up until that time, Gandhi had opted to not include her assault, focused instead on other aspects of her story. By then, the issue of sexual assault in India had gained global attention following the tragic story of Jyoti Singh Pandey. Pandey, a 23-year-old, was brutally gang raped in South Delhi, and later died as a result of the trauma.

It was the protests in India that followed Pandey's death, and the later banning of a documentary that chronicled the attack, that led Gandhi to include her own assault in Muthaland.

"I realized for the first time, I want people to be able to talk about their experiences and not be judged," she said. "But in some way I realized I was victim-shaming myself in not talking about my own experience."

Gandhi said she thinks it's one of the most powerful parts of her play, showing how she finds her voice and makes peace with her family. Muthaland had its world premiere in Chicago and was also a part of the Oregon Shakespeare Festival in 2016. She has performed the production all across colleges and universities in the U.S. as well as the Ignition Festival at Victory Gardens Theater and at the Raven Theater in Chicago.

PCPA staff learned about her show and reached out to her to add it to the new season. Gandhi jumped at the opportunity to bring her play back to her theatrical roots on the Central Coast.

"[PCPA] was the first artistic community I had built for myself," she said. "I'm so excited. This is actually the first show I'm going back to do at PCPA since I graduated."

Muthaland, in Gandhi's words, is a play about parents and daughters, about being a woman, about coming of age and gaining one's own voice. She said since she first started performing Muthaland, people have shared their own stories of sexual assault with her as the public conversation around sexual assault comes more and more to the forefront.

"Every show I do I always do a talk-back afterward," Gandhi said. "Every time I do the show, whether it's in the talk-back or after the show itself, somebody always comes up to me to share their story with me. It's horrifying that that is the case every single show. Part of me can't wait until the show is a little bit less relevant." Δ

Rebecca Rose is the Arts and Lifestyle writer at New Times' sister paper, the Sun. Contact her at rrose@santamariasun.com.