My business is to sing 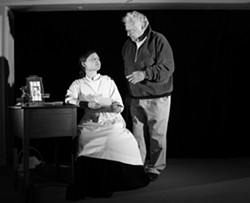 Two years ago Emma Duncan—clad in a dress of bridal white—undertook a feat that can best be compared to the theatrical equivalent of scaling Mt. Everest. Solo. The 17-year-old performed a 90-minute, one-woman monologue, initially as a senior project for Midland School in Los Olivos, and later under the tutelage of Nehemiah Persoff as a month-long production at Cambria’s Pewter Plough Playhouse.

Fresh off her first two years at Sarah Lawrence College and about to embark on a year of study with the British American Drama Academy in London, Duncan is returning to her old friend, Emily Dickinson, for a revival of William Luce’s The Belle of Amherst. The show runs through Aug. 1 at Cambria’s Theatre at the Old Grammar School.

The Belle was not Duncan’s initial choice for her summer performance. She planned to direct a production of Hamlet at the theatre, but couldn’t find a sufficient number of performers. Having already made a commitment to the theatre to stage something in July, the only thing Duncan could think to offer was The Belle, which required only herself to perform.

“It is an odd thing to be able to pull out of your sleeve,” she acknowledged.

The more she pondered it, the more appealing it became. Duncan hadn’t so much as thought about the script, much less rehearsed it in order to keep the endless pages of text organized in her mind. She didn’t need to, as it turned out. No sooner did she look at the script than it all fell back into place.

Anyone who watched her last triumphant staging will naturally look for changes in this second run featuring a slightly more mature, experienced actress. In her first incarnation, Duncan focused on Dickinson’s notorious shyness, noting that when she steps onto the stage and sees the audience, her first reaction should be fright. Persoff encouraged her to emphasize the character’s humor and quirkiness. In this third version, she’s merging the two previous efforts, maintaining the poet’s humor, but tempering it with a thoughtful gravity.

Duncan delivers her lines rapidly, speaking as shy people often do, as though they’re afraid of not being listened to. But there’s a hint of naughtiness as well, that bursts into comedic flame when she reenacts her schoolgirl rebellion against a group of boys who attempt to censor Shakespeare’s objectionable passages. The awful truth is that Emily Dickinson is funny, and sometimes wicked, in ways no comedy ever could be. And she is a character with substance.

“People get tired of being handed stuff that doesn’t make them think,” said Duncan. “I don’t think people like being handed the same Neil Simon comedy over and over.”

The actress credits theater classes at Sarah Lawrence, and the isolation that attends moving very far away from home, with giving her better insight into her role. In particular, a Dramatic Improv class she was reluctant to take has played a major role in her theatrical education. She’s now a member of the college’s dramatic improv group, Rotten.

Despite her appreciation for the skills she was acquiring at Sarah Lawrence, Duncan considered quitting after her first year; the separation from her boyfriend, fellow Cambria resident and San Francisco State student Corbin Went, was proving too tortuous. But after agreeing to an increased pace of cross-country travel, and with the help of Skype, Duncan decided to remain in New York.

Already, the sacrifice is paying dividends. Last December, Duncan and Went publicly announced their engagement—“It wasn’t so much a yes as a duh,” she said of the proposal. And Went, also, is one of the 45 students selected to attend the British American Drama Academy, much to Duncan’s relief; if Went hadn’t been accepted, Duncan would not have attended the program. The trials of separation were forefront in her thoughts when she turned to the text about Dickinson’s life, which seems perpetually marked by a lonely shadow.

“Things that were moving to me then are less so now,” confessed Duncan, of her performance at the Pewter Plough Playhouse. “And things that I didn’t really understand are deeply affecting.”

Dickinson’s world—Amherst, Massachusetts, and specifically her family’s land—is humble in scale. She bakes, chastises her sister and brother, worries about a skirmish with her father over her predilection for late nights. But she also begs entry into, and masters, a world of words. This other space is limitless, and Dickinson knows how to soar within it, to praise exquisite nature and contemplate death. And Duncan shows that she understands, through her acting, the delicacy of these words, that each was chosen so precisely that none can be thrown away during delivery.

“Words are my life,” says Duncan-as-Emily during the show. “I look at words as if they were entities. Sacred beings.”

Dickinson’s isolation in life is mirrored by the actress’s onstage isolation. With no other actors to play off of, Duncan turns to the audience with an almost painful vulnerability. She steps onstage and notes the audience, acknowledges them, talks to them as if they were friends. The character onstage is always completely aware of the audience. “I hadn’t planned to tell you this,” she says at one point, before a painful revelation. On another occasion she muses that perhaps the audience is laughing at her.

“In a way my saying ‘perhaps you’re laughing at me,’ those are the most truthful in the play,” explained Duncan. “Because I don’t know how you feel about me or her or the play.”

Those in attendance at a recent mid-July performance were unambiguous in their display of appreciation for Duncan’s talent, but they were too few. There are performances that merit the occasional empty seat, or even house, but this is not one of them. In particular, there were too few young people—and by young, I mean people with fewer than 40 years to their credit. The question of how to drive young people into the theater has long haunted local companies, but if youthful theater-goers are looking for their image and voice, this is it. Dickinson and Duncan are a winning team.

Had there been any question of Duncan’s youth, she laid them to rest when she arrived at an interview carrying a ukulele, on which she had just learned to play Lady Gaga’s “Alejandro.” Not quite as elegant as “the soul selects her own society, then shuts the door” but it has been more than a century since the noble belle’s death, and someone must entertain in her absence.