My Fair Lady of the gutters

With the exception of a hushed word or two, and a bit of scurrying and scuffling, stage crews are usually silent as they arrange a set between scenes of a live performance. Not at SLO Little Theatre’s My Fair Lady. Here the cast turns rearranging into a mini-show. Talking in broad cockney, they giggle, deliberate over where to put this and that, whine about how heavy things are, get distracted and speculate on the correct terms for bits of furniture. (“Don’t they call it a pouf?” asks one, heaving a puffy pink object from the stage.)

It’s as if the unwashed underclass had descended en masse upon a posh London apartment, found the place empty, and commenced to frolicking about, exclaiming, “Now what shall we do?” Loudly congratulating themselves on their artful arrangements, they shrug off-stage, one at a time. The lights come on again. Eliza and Professor Higgins reclaim London, circa 1912. 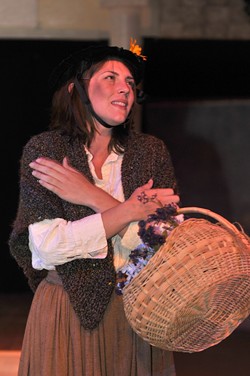 Just like the play’s purposefully unsubtle rearranging, the charm of My Fair Lady’s heroine is not in her delicacy. Cockney sparrow Eliza Doolittle, (Lauren Alburn) is discovered outside Covent Garden by phonetics professor Henry Higgins, played charmingly and convincingly by Alan Benson.

Higgins meets Eliza, with her boisterous attitude and her wretched little dress. She implores, in earnest cockney, for passersby to “buy a flower off a poor girl.” A language purist and author of Higgins’ Universal Alphabet, Higgins is horrifiedÉand intrigued. He shocks her by correctly naming the neighborhood where she grew up—Lisson Grove—a guess purely based on her ghastly, ear-splitting dialect.

Higgins makes a bet with Colonel Pickering (Stephen Espinosa): In six months’ time, he can transform Eliza from a draggle-tailed guttersnipe to a veritable duchess, just by teaching her to speak properly. What keeps Eliza in the gutters, Higgins believes, isn’t her bedraggled, patched outfit so much as her shameless butchering of God’s own language: English!

So begins Eliza’s metamorphosis from guttersnipe to upper-class debutante in the beloved classic by Lerner and Loewe. But it’s a rough ride. Often labeled a snobbish and misogynistic character, Higgins can be devilishly cruel. Eliza sits through lessons night and day, all the while being berated by Higgins. (“She’s so deliciously low,” he enthuses. “So horribly dirty!”)

During one particular exercise, which drags into the predawn hours, Eliza must attempt to speak with her mouth full of marbles. She dejectedly announces, “I’ve swallowed one.” “Don’t worry,” he responds, almost soothingly. “I’ve got plenty more!”

Stephen Espinosa’s portrayal of the rational, level-headed “straight man” makes the comically embittered Higgins seem even more exaggerated. Espinosa’s talents, as he says himself, are more musical than theatrical.

Yet Espinosa is convincing as the serious, cultured Pickering. As Higgins launches into one of the two sharp-witted “sexist diatribes” of the play, as actor Benson is wont to call them, Pickering is the one saying, “Do be reasonable, manÉ” Ultimately, however, he allows Higgins to have the last eloquent, inflated word on the matter.

If Higgins’ views are so politically incorrect, why does no one seem offended by such musical musings as “Why Can’t a Woman (be more like a man)?” As director Rachel Hocket points out, we laugh because most of us know Higgins’ views are ridiculous to the point of absurdity. If we took him seriously, well, then we wouldn’t be laughing so hard.

Lauren Alburn doesn’t let audiences down as Eliza Doolittle. Alburn’s Eliza is quick-tempered, yet lovable. During the song in which Eliza vents her frustrations against Higgins’ ceaseless orders (“Just You Wait”), her accent is perfect and her voice is exquisite (Audrey Hepburn’s voice, if you’ll recall, was dubbed over in the 1964 film).

But during this scene, I couldn’t help thinking: Let it out, Eliza! Professor Higgins has just been so incredibly pompous and rude. Oughtn’t you to be livid? Eliza does appear pretty ticked off in this scene, but not enough to enact the revenge fantasies described in “Just You Wait.” Perhaps it’s just her lady-like lessons beginning to take effect. But I’m sure the fiery flower girl we met in Covent Garden wouldn’t have held anything back.

Alburn is at her best in the Ascot race scene, when Eliza’s sincerity and exuberance liven up Ascot’s stuffy, prestigious old-money crowd. Pretending in earnest to be a lady, Eliza manages only to superimpose a royal-sounding accent over cockney slang. A smashing sight in fabulous feathered headgear, Alburn has a sort of innocent, winning offensiveness that can melt the coldest of hearts.

Perhaps the accent, manner and philosophy of the cockney underclass are best captured by actor Mike Mesker in his portrayal of Eliza’s ne’er-do-well father. A loud, shameless blaggard, Mesker’s Alfred Doolittle speaks, drinks, dances and carouses like a sailor. When questioned on his morals, Doolittle blusters, “Nah, can’t afford ‘em, guv’nor!”

Alfred Doolittle is very much the opposite of Professor Higgins, who describes Alfred, jokingly, as “one of the most original moralists in England.” Mesker’s cockney accent and delivery are spot-on. For the audience, his appearance on the stage generally signifies a rowdy good time.

In the end, however, it is Benson’s portrayal that steals the show. Higgins is not so gruff as to seem inhuman, but certainly no pushover. The brief times the audience catches the boisterous Higgins being ‘sensitive’ are moments to be treasured. The ending of the play, improbable as it might seem, satisfies. After all, this isn’t a play that tells us what reality is! Instead, it merely asks, “Wouldn’t it be loverly?”

INFOBOX: For tickets and showtimes:

Has intern Anna Weltner said anything she oughtn’t? Let her know via Arts Editor Ashley Schwellenbach at aschwellenbach@newtimesslo.com