My, what big teeth you have!

Local artists make dental art for a cause

It’s Friday, Feb. 4, and I’m walking into the SLOMA (that’s the San Luis Obispo Museum of Art, bubs) for Art After Art After Dark. That’s not a typo, it’s when the SLOMA lets a bunch of punks take over the classroom in the museum at 9 p.m., when Art After Dark ends, allowing them to do whatever kids do when you give them some free space.

I’m eyed suspiciously as I snap photos and walk through the youthful crowd. I half expect to hear someone whisper “narc” under his breath! Screw you, you punks! I invented the disaffected youth mythos. I was writing bad poetry at coffee shops when you were just a gleam in your parents’ eyes. I thought Gertrude Stein was cool before your parents ate their first pot brownies. Punks!

Who are all these dirty heads, these hipsters, these scene makers anyway? And what are they doing here? And is it nepotism that I’m writing about this event even though it’s organized by New Times Arts Editor Anna Weltner, who’s technically my boss even though she’s only 23? Overachiever!

Weltner recently took the reins of this monthly event, and this tooth-themed show is packed with weird displays like a dentist chair and dental-themed art. On a screen, a series of toothy slides cycles through as a band sets up.

“Basically, this show is inspired by my friend Dustin Garrison who was in a bike accident and knocked out a tooth and pushed in his two front teeth,” Weltner said. “In fact, some of the x-rays we’re projecting are his.”

The idea is to raise some funds, but as I look around at this lot, I bet they couldn’t pool enough money to share a cab home. I’m half right.

One Monday, Weltner tells me, “We asked for donations. It was basically 100 bucks in ones, including the money raised from art sales, but every bit counts. Usually the museum takes the donations, but they were nice enough to let us have them.”

Back to Friday, Weltner explains where the art came from: “Neal Breton at San Luis Art Supply knew a bunch of artists who were willing to make some stuff on the fly, which is where all the art came from.”

The refreshment table is basically leftovers from SLOMA’s Art After Dark event.

“We’re like little kids siphoning off the punch, peanuts, snacks, but they won’t let us have the leftover wine. It has to be a dry event,” says Weltner, who adds that the show will hang for three days.

“We do have work by Nick Wilkinson, who currently shows in the SLOMA, and paintings by Lena Rushing.”

“The Swan Thief,” replies Weltner as the nepotism gets a little deeper. It’s her boyfriend’s band.

“In between songs, we’ll have people reading rejection letters from the dentist’s chair,” she continues.

As people read, a video camera operator films them, projecting the image onto the screen.

“The idea is when you’re at the dentist, they focus in on your mouth so you can see your cavities on the screen, but [the person who was going to lend us a quality camera] wouldn’t let us have it, so the museum bought a little cheap one.”

Instead of seeing a disembodied mouth on the screen, the closest they can get before the image pixilated into abstraction is a torso shot.

Continues Weltner, “The first rejection letter we’ll read is from the Museum of Modern Art to Andy Warhol, which is real, but some are fake, like one I wrote about Pluto, which says, ‘Sorry, but your planet status has been revoked because your orbit is untidy.’ That kind of thing. It was easy to get people to create artwork, but hard to get people to read. It was like pulling teeth … um, I don’t mean it like that.”

Too late, sucker! You win the Bad Pun Award! 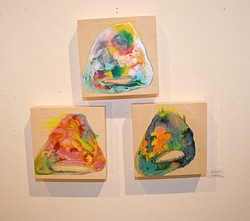 “So what’s the next Art After Art After Dark?” I ask.

“I don’t even know yet,” says Weltner, who’s more organized at work. “I’m open to suggestions. I was thinking of doing something about a copy of a copy of a copy, you know, ask other artists to do copies of other artists’ work. But that may take longer than a month, so it may come later, but something will happen on Friday, March 4.”

How about a performance art free for all? All these punky little hipsters look like they’re hungry for attention. Punks!