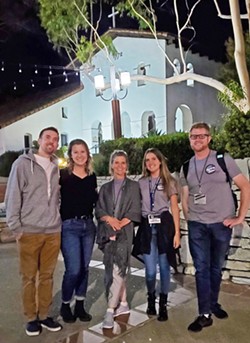 "I come from a law enforcement family. While most kids growing up may have gotten bedtime stories about Peter Rabbit, I got true crime," SLO native Nicholson said. "That was my dad coming home and telling me about his day. From a very young age, I was exposed to a much darker side of SLO than most people experience."

Gnarly nighttime stories not only instilled a fascination with storytelling in Nicholson but they also sowed the seeds for her guided ghost tour organization called Mystery Loves Company Tours. Nicholson and her three tour guides kicked off their first tour around Downtown SLO on the evening of Oct. 20.

Her interest in such tours sparked when she started traveling with her husband, Matt, around the country, and it allowed both of them to mix their interests of murder mysteries and history. Trips to famously haunted cities like New Orleans highlighted the lack of mystery tours in their hometown.

"We were like, 'How come SLO doesn't have this?' We realized that there was really nobody else in the town exploring the dark history of SLO, and we decided to have a go at it. We uncovered a lot," Nicholson said.

With her husband's help, Nicholson spent hours poring over documents and old newspaper clippings from the SLO County History Center and pieced together accounts of SLO's gruesome past.

"I love the power of story and spoken word and how a story can really captivate a diverse group of people," she said.

The company gave SLO a small taste of their findings through a soft opening the weekend before their first official tour. Tour guides Amy Layman, Ashley Bucknum, and Kevin Boynton unpacked history and haunted stories ranging from the old hanging tree at the mission to the spirit of a wandering nun at Mission College Preparatory Catholic High School. Other hotspots included the Ah Louis Store and the Anderson Hotel, both sites of grisly murders.

Nicholson said that her guides have the liberty to "make the material their own" when it comes to delivering the stories. Every stop on the tour has a draft story, and Nicholson attached helpful records and articles to each one so the guides could personalize their narration with different intriguing facts.

But while Mystery Loves Company thrives on retelling stories from SLO's underbelly, Nicholson said that walking the line between presenting the truth and exploiting trauma is a balancing act she's determined to succeed at.

"We purposely have avoided modern history for that exact reason. So we don't talk about Kristin Smart and Rex Krebs ... to be sensitive to residents of SLO who are still there and have felt the impact of these recent crimes," she said.

The tour focuses on events from the founding days of the city between the 18th and 19th centuries. Nicholson said that the aim of the tour is to transport people back in time through stories, but not to cause fearmongering. In fact, her team came across people who wanted to experience the spook factor.

"They seem to be drawn to that, they want to be horrified. I think it's going to be a continuing balance where we say, 'OK, how do we make sure we aren't over sensationalizing these stories?'" she said. "It's really just meant to be a fun little cheesy ghost tour. It's not meant to be taken too seriously."