Nail bling and blowouts await at Posh Couture in SLO

Yessie Nojas says she can’t draw to save her life, but give her a tiny nail as a canvas and she will let her imagination run wild. So wild, in fact, that she reached the finals of an international nail competition, and, most recently, opened her own nail studio. 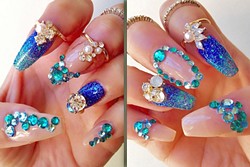 “I just have a big passion for nails,” she said. “It’s a way to express myself. I love it.”

The 25-year-old Nojas, a hairstylist and self-described nail artiste, opened Posh Couture Nail and Hair Studio in downtown San Luis Obispo in March. The studio offers manicures and pedicures as well as hair treatments like blowouts, cuts, and colors.

The artistic aspect of doing nails is where Nojas excels, specializing in 3-D nail art, custom acrylic sets, gels, crystals, and charms. She’s known for adding “a lot of bling” to nails, she said—a personal touch inspired by her experiences studying abroad in Japan.

“Japanese nail art is crazy and over the top,” she said, “And then when I came back here it was really hard to find anyone who would do something similar.”

Nojas went to beauty school with a focus on hair, but continued to develop her nail skills, and last year, those skills propelled her onto an international stage. Competing in the 2014 edition of NAILS Magazine’s competition NAILS Next Top Nail Artist, she was chosen as one of 12 finalists from across the globe.

That memory may seem hard to beat, but Nojas said opening Posh Couture comes pretty close in terms of career highlights. With her own studio, she hopes to expand her client base while still retaining the intimate experience she values. She knows everyone’s story, she said, and follows clients through college graduations, engagements, and other life-changing events.

Because of that personal connection, Nojas almost only works by appointment since she wants to create a comfortable atmosphere for each client and allow enough time to give everyone exactly what they had in mind.

“Some of my best memories are when I have older clients come in for their first manicure and I get to walk them through the process,” she said. “It’s really cute.”

Although Posh Couture is still in its early stages, Nojas hopes to one day expand her business in downtown San Luis Obispo. Ultimately, she would like to move into a bigger space and add some employees, and perhaps even help future nail artists learn a thing or two.

“Having an academy of my own and being able to teach upcoming talent would be amazing,” she said.

Posh Couture Nail & Hair Studio is located at 774 Marsh St., suite 120, in San Luis Obispo and online at facebook.com/nailsandhairbyess and instagram.com/poshcoutureslo. To schedule an appointment, text or call Yessie Nojas at 903-2365.

This Saturday, July 25, HopeDance presents an all-day immersion into the subject of water at the SLO Grange Hall on 2880 Broad St. From 9 a.m. to 7 p.m., the event will feature speakers, films, and workshops on all uses of water—gray water systems, compost toilets, water mysteries, and more. Tickets range from $10 to $35, although scholarships are available. For more information, visit hopedance.org or call 762-4848.

Intern Anna Hoernell’s nails would quite possibly scare off the most skilled of manicurists. Send your business and nonprofit news to strokes@newtimesslo.com.