It's been a weird week in America.

The government is still shut down because the president demands American taxpayers pay for a monument to his ego on our southern border.

A group of supposedly "Christian" high school students from Covington High School—who were bused into Washington, D.C., to march and demand that women be forced to have babies they don't want—were caught on video sneering at and mocking Native American activist Nathan Phillips, who apparently stepped in to defuse tensions between the high schoolers and a group of protesting black men who were yelling at the MAGA hat-wearing kids. Even weirder, the whole fiasco blew up on social media with liberals piling on the apparently disrespectful kids while conservatives rationalized the kids' behavior by condemning Phillips for being the aggressor. How's that for partisan tribalism?

And finally, James Baldwin's 44-year-old novel about systemic racism, If Beale Street Could Talk, opened locally at the Palm Theatre, and its message seemed all too timely and not 44 years old at all.

Clearly, the time feels right for Native and African-American soul singer Martha Redbone and her Bone Hill concert at Cal Poly's Spanos Theatre this Sunday, Jan. 27 (7 p.m.; all ages; $39 general admission and $31.20 for students, faculty, and staff at calpolyarts.org or (805) 756-4849).

Bone Hill is a piece of musical theater that Redbone and her longtime collaborator pianist, Aaron Whitby, developed at NYC's Joe's Pub in The Public Theater. The original musical production traces Redbone's family back four generations in their Kentucky homelands of the Black Mountains and the coal mines of Harlan County. The concert's song genres change as Redbone, taking on the various characters of her ancestors, moves through time. You'll hear traditional Cherokee chants and lullabies, rootsy bluegrass, blues, country, gospel, jazz, rock 'n' roll, and R&B.

"Well, not only my family but also the whole town was a melting pot," Redbone explained during a recent phone interview. "We were all coal mining families, and our story upends the cliché that the hill people associated with Appalachia were basically all a bunch of inbred rednecks. People forget that coal mining brought in people from all over: Portuguese, Turkish, African-American, Native American. People think of the Scottish, Irish, and Germans, but people came from all over, and their truths get shut by the wayside."

Bone Hill doesn't shy away from dark and violent times in her family's past, exploring colonialism and race, examining the plight of the Cherokee people upon their return home from the Trail of Tears, looking at the dynamics between Native and African-Americans, and more.

Does Redbone see parallels between her family's story and what's happening in American today?

"Absolutely! How long do you have, you know?" she joked. "All of the things going on in the world affecting everyone everywhere have been continually happening over time and are continuing to happen faster than we can get our heads around. I do think looking into the past helps explain how were got here. Even if there hasn't been an actual genocide, there's been a genocide on paper and through policies that are meant to affect certain groups of people, to exclude and contain them."

At the heart of Bone Hill is one woman's attempt to look at "The Truth," to pull back the curtain and face the facts.

You can hear Redbone's truth this Sunday and decide for yourself how it fits into the context of America today.

"I'm just really excited to tell this story out there in San Luis Obispo," she said. "It always surprises me how the story seems to resonate with all people. It's a real American story. I did the show in Texas and afterward an Indian family from India came up and told me how they had moved to Texas in the 1990s, and their struggle to become American but to also hold onto their home culture."

Every American has a story. Witnessing Redbone's may remind you of yours.

All shows are 16-and-older. Buy tickets at Boo Boo Records or fremontslo.com.

Numbskull and Good Medicine Presents at The Siren 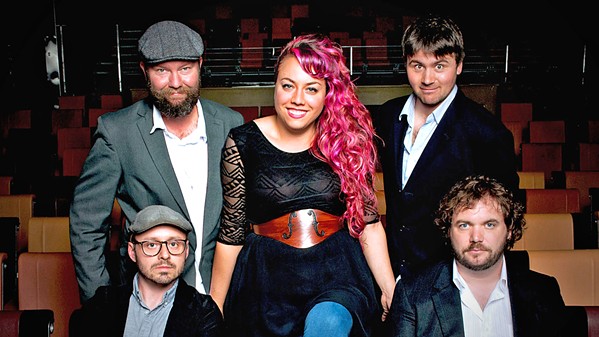 Somewhere between indie folk and Americana, you'll find Front Country, a roots pop act disguised as an acoustic string band. See them Saturday, Jan. 26, with Alec Lytle & Them Rounders opening (8:30 p.m.; 21-and-older; $12 presale at Boo Boo's or ticketfly.com or $15 at the door).

The African Children's Choir plays the Clark Center on Friday, Jan. 25 (7 p.m.; all ages; donations appreciated). Prepare to have your hearts melted by this joyful group performing lively African songs and dances.

The SLO Blues Society presents blues master Tommy Castro and the Painkillers on Saturday, Jan. 26 (7:30 p.m.; 21-and-older; $25 at the door), at the SLO Vets' Hall, with Back Bay Betty opening.

Get your hot jazz fix when the Basin Street Regulars host The High Sierra Jazz Band and Rag Bone Saints this Sunday, Jan. 27, in the Pismo Vets' Hall (1 p.m.; all ages; $10 at the door).