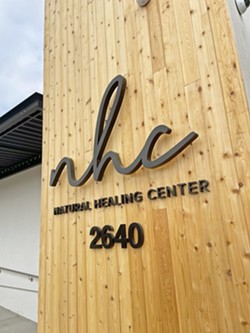 As promised, Natural Healing Center sued the city of San Luis Obispo on Dec. 23, alleging that the city overstepped its authority when it terminated the company's cannabis dispensary permit in October following news that its founder and former CEO, Helios Dayspring, committed felony bribery and tax fraud.

According to the company's complaint filed in SLO County Superior Court, Dayspring and the Natural Healing Center (NHC) poured more than $4 million into constructing NHC's new dispensary at 2640 Broad St., only to see its hopes dashed by the city on the eve of it opening.

NHC attorney John Armstrong argued in court documents, and in a phone interview with New Times, that the city erred by trying to hold the company responsible for Dayspring's misconduct.

Dayspring is no longer a stakeholder in NHC, and, on top of that, the city had already awarded the company a dispensary permit in 2019, making it a vested right, according to Armstrong.

"The reality is that it was six months or a year [ago when the city] already agreed to a change where Helios was not going to be involved in the business and have different owners take over," Armstrong said. "Now, it's just punitive."

The company's lawsuit states that NHC and Dayspring are in a five-year lease agreement for the building—at a rent of $55,000 per month. Armstrong called the dispensary "horribly, horribly expensive" to build under city code for cannabis storefronts.

If NHC is barred from opening, the company will then be "liable for the landlord's cost and expense of improving the premises ... which will result in the financial destruction of NHC," according to the complaint.

The lawsuit claims that the city wrongfully relied on its rules for cannabis applicants to try to confiscate a cannabis permit that NHC already obtained.

"The problem the city has on this case is they're not playing by their own rules," Armstrong said. "Once you've issued the permit, that's when people start spending real money. ... If you get the license, you have to go through this crucible, now, it's more or less you're judged not on your past anymore, but what you are doing now."

SLO officials, though, maintain that NHC's permit was rightfully terminated. A city review determined that Dayspring had lied throughout his application process in 2018 and 2019, which resulted in NHC getting a coveted permit for a dispensary despite the fact that Dayspring had been actively engaged in the criminal activity he would later plead guilty to.

"The fact remains that during the permit application process, NHC provided the city with false or misleading information about criminal misconduct," SLO City Attorney Christine Dietrick said in a statement to New Times. "We are committed to a fair and transparent process that provides a level playing field for commercial cannabis companies in our city. The automatic termination is the sole result of misrepresentations about Dayspring's criminal misconduct in the application process that were in the exclusive control of NHC and its stakeholders. The city remains confident that its actions were appropriate, legally well-supported, and consistent with the city's clearly articulated rules."

Armstrong said he plans on filing a motion in the coming days to ask the court for an emergency hearing to allow NHC to continue preparing for its SLO dispensary while the case plays out.

Dayspring's sentencing hearing in federal court is scheduled for Feb. 11. ∆