A few dozen employees of Natural Healing Center chanted their company's acronym in unison on Oct. 19 while gathered on the steps of San Luis Obispo City Hall. 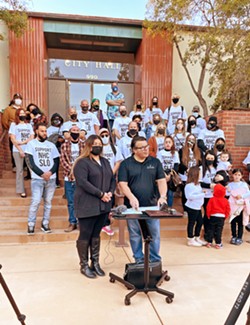 Donning white T-shirts with "save my career" printed across the back, NHC executives and workers assembled to protest a recent SLO city decision to revoke NHC's permit for a cannabis dispensary on Broad Street—which came after company founder Helios Dayspring pleaded guilty to felony charges of bribery and tax evasion related to his cannabis businesses.

"We are here to ask the City Council for help. ... What's happened here is a big mistake," NHC Government Affairs Manager Joe Armendariz said on the steps, flanked by now-CEO and majority owner Valnette Garcia.

On Oct. 6, SLO terminated NHC's dispensary permit following a "thorough review" of the evidence. City officials concluded that NHC had submitted "false or misleading information about criminal misconduct" in its permit application in 2018.

Dayspring's plea agreement with the U.S. Department of Justice announced in July states that the former NHC majority owner committed tax fraud between 2014 and 2018 and began bribing late SLO County 3rd District Supervisor Adam Hill for favorable cannabis votes in 2016—both before his company applied for a dispensary permit in SLO.

City officials said NHC never disclosed that misconduct in its background interviews, which violated local regulations, and that the company "would never have received the permit had we known then what we know now." SLO awarded three cannabis storefront permits in 2019, including one to NHC, while nine companies applied.

"While we understand the company's disappointment, we, too, are disappointed that the business included false and/or misleading information to the city, which directly resulted in automatic disqualification of their application and termination of their permit," SLO Public Communications Manager Whitney Szentesi said in an Oct. 19 email to New Times.

NHC is fighting the decision, which is likely to end up in court.

First, NHC appealed to the City Council. At City Hall on Oct. 19, Armendariz told a gaggle of media that the company was just days away from opening its "flagship" store in SLO, which combined two lots on Broad Street and has been in the works since 2019.

"It is a certified net-zero [emissions], environmentally superior dispensary, the likes of which has never been seen not just in SLO, quite frankly, but in California," Armendariz said.

Several NHC employees stepped to the front after Armendariz spoke and talked about the company and its virtues, while pleading with the city to change course.

"I am a lead budtender at the SLO store," said Christian, a NHC worker. "They say that if you want something bad enough you have to claim it like it's already there. I'm claiming that.

"You get the gist that [NHC] is more than just a cannabis dispensary," she continued. "It's our livelihood. It's our community's livelihood. ... Honestly, without NHC, I don't know where I'd be right now."

NHC owners Garcia and Kenny Johnson (a minority owner) penned a letter to the City Council that called the city staff's decision "draconian" and a "devastating financial blow to our company." Founded following cannabis's legalization, NHC has stores open in Grover Beach, Morro Bay, and Lemore.

"As a company we have gone through incredible lengths and sacrifice to create a one-of-a-kind environmentally sustainable operation for our employees, customers, the city, and residents of SLO," their letter read. "It is nothing less than a travesty that Val and her staff are being punished for something they had nothing to do with or were involved in."

NHC staff repeated these pleas during public comment at the City Council's Oct. 19 meeting. In response, Mayor Erica Stewart and Councilmember Andy Pease expressed sympathy for the workers but backed staff's decision, which Pease said was about preserving the "integrity of the process." The council took no action afterward.

"There's extensive documentation that will be available in terms of the background, in case employees want to better understand where we're coming from," Pease said. "I think we totally sympathize with what the folks are going through. This is a super unfortunate situation overall."

NHC promised to challenge the city's decision in court. In a letter sent to the city, NHC attorneys said that "millions of dollars are at stake here" and the company is "prepared to proceed with a formal complaint if your attempt to terminate my client's permit is not immediately revoked." The letter emphasizes that the city's punishing of the company "for the sins of a former owner flies in the face of the city's actual ordinances" and "the legal rights and reasonable expectations" of NHC.

City officials and NHC attorneys met on Oct. 15 for a formal discussion about the permit but it did not change the city's decision. On Oct. 19, while NHC was protesting at City Hall, SLO sent out a press release confirming its initial conclusion to revoke the permit.

"The company cannot activate, obtain, or hold an operator permit to conduct commercial cannabis activity at 2640 Broad St. in San Luis Obispo, which is not yet open to the public," City Manager Derek Johnson said.

SLO is the first city to take action against NHC in the wake of the Dayspring scandal. Grover Beach officials said they will allow the dispensary to continue operating following an internal review.

"Since the opening of the business in 2018, there has been no impropriety in NHC's operations," City Manager Matt Bronson said in an Oct. 12 email to New Times. "NHC has followed all guidelines and requirements set forth by the city's ordinance and is an active member of the legal cannabis industry within the city producing local jobs and tax revenues."

According to NHC, its Grover Beach dispensary is the single largest sales tax revenue generator in the city.