He comes but once a year, bringing tales of unemployment, horrid work uniforms, and tears. And while Santa may drop the occasional "ho, ho, ho," this less-than-jolly fellow lets out the occasional f-bomb and strips down to his underwear. 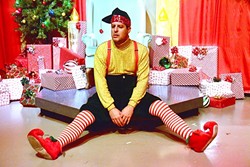 For the fourth year in a row, San Luis Obispo Little Theatre Artistic Director Kevin Harris will reprise his role as Crumpet in The Santaland Diaries, a play based on a story from David Sedaris' book Holidays on Ice. Crumpet is Sedaris' alter-ego, when, as a grown man, he's forced to work at Macy's one Christmas as an elf.

Also joining in at the Little Theatre for its fourth year is the classic, family friendly book-turned-movie-turned-play A Christmas Story where the character Ralphie looks back on when he was a kid who only wanted a BB gun.

"It's just nice to do Christmas stuff," Harris said. "The older I get the more I'm a fan of Christmas."

While The Santaland Diaries is Harris' one-man show, A Christmas Story features a full cast, but nearly everyone in both shows is a veteran this year, with just two cast members being new to the holiday shows. In particular, Harris said he was able to really work with child actors in A Christmas Story to continue to improve the show. 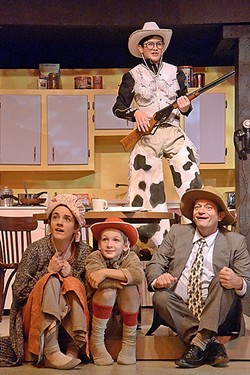 "This is the first time I've been able to work with young actors for two years straight and really being able to focus in on the scenes with them and just make them super true," Harris said. "They're bringing so much of themselves to the role and the entire point of the show is about an adult looking back through a kid's eyes."

All year long Harris works behind the scenes directing shows and making sure everything runs as it should at the theater. But like Santa, he has a seasonal gig and returns to center stage every December to dust off his acting chops.

"It's super hard and it's a nice reminder as to what all of our actors do and the amount of time, commitment, and passion it takes to get it right," Harris said. "I'm a year older and things change, not only physically, but mentally. My perception of the world gets a little bit different and bringing that to the show really helps."

Not-so-fun fact: While Santaland Diaries is based on Sedaris' writing, the play was adapted by Joe Mantello, and it's been said that thanks to a bad business deal Sedaris gets no money from the show. So fans of the play are encouraged to buy a copy of Holidays on Ice. 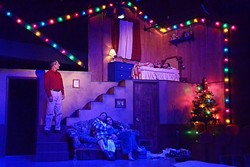 Every year Harris watches families from tots to grandparents head into the theater for a viewing of A Christmas Story, their favorite lines memorized from watching the movie. Toward the end of that show, audience members stumble in from a night spent downtown, scrambling to order more drinks from the lobby before Santaland Diaries starts shortly after.

"It's a nice mix of people," Harris said. "A Christmas Story is a show that everyone is going to enjoy, and we can't say that about the rest of the shows we do here. With Santaland Diaries we say it's rated R, but we say that to cover our asses. My kids come to see it every year and they seem to enjoy it. Ages 9 to 90!"

Ryah Cooley is frolicking away in Santaland at rcooley@newtimesslo.com.