“We carry a pretty big selection of lingerie. We also have boxed lingerie, which is more cost efficient, but still has the same great quality,” explained owner Michelle Norton. 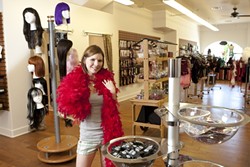 She navigates through the seemingly endless racks of corsets and barely-there underwear like a seasoned veteran, despite having just opened the store in October. Naughty But Nice carries lots of things you’d expect to find at an adult variety shop and lingerie store. There are bachelorette-themed goodies like cake toppers featuring a leashed groomsman and an … adult-themed pin the tail on the donkey featuring a hunky male pin-up.

Naughty But Nice also carries men’s underwear, shoes, wigs, and an abundance of sensual oils and candles. But there are some things you won’t find at just any lingerie store—and even the seemingly tame things aren’t always so mundane.

“Do you see that cute teddy bear over there?” Norton said, making her way over to a tan, plush toy perched on a shelf. “He’s cute right? Well, he also has a pocket in the back where you can keep toys.”

“These are all made of body-safe materials and they’re rechargeable, which makes them more durable,” Norton said.

If the vibrators don’t keep you occupied, the bondage section will. Norton says the items are extremely popular, probably due in part to a recent literary fad.

“Fifty Shades of Grey has been really popular, and I think people are reading that and saying to themselves, ‘I want to try that!’” she said.

“We want to make a space that feels friendly and welcoming for people and couples to come in and ask questions,” she said. “We want to be here to add to the community.”

Naughty But Nice isn’t just sex and toys. Norton has created a space for people to explore and create with their bodies. The coolest things Norton sells, by far, are the poster tubes on the wall near the register.

“Those are white, canvas kits that have black body paint and a plastic sheet in them so couples can lie down and create their own abstract art-body piece,” Norton explained. “And then you can frame it and hang it over your bed. If anyone asks ‘What it is that?’ [and] you don’t want [them] knowing, you can just say, ‘Oh, we really liked that and bought it at an art show!’”

Naughty But Nice is at 1319 Spring St. in Paso Robles. Check out their store hours at nbnstores.com and be sure to like them on Facebook.