The Nautical Bean is located at 11560 Los Osos
Valley Road in the Laguna Village Shopping Center
and at 2010 Parker St. in SLO. For hours and
information, go to nauticalcafecoffeehouse.com
or call (805) 543-3559.

Do you know the difference between Pac-Man and Ms. Pac-Man (it's more than the bow on her head)? Does the smell of Aqua Net take you back to your first real slow dance? Did you go to elementary school with a Star Wars lunchbox? Did your best friend also have a Star Wars lunchbox?

Congrats! You're probably an '80s kid. Walking into the new Nautical Bean may cause some funny side effects for you (besides the desired amount of caffeination). Expect waves of nostalgia, especially when looking at a south facing wall plastered with pictures of Chewbacca, the Misfits, and David Bowie. Yes, it's only been about a month since Nautical Bean's second location—on the corner of Parker and High Street in SLO—officially opened, but Jones already has a boatload of regulars. A lot of them are '80s kids, too, although plenty are younger students tapping on laptops and texting over lattes.

That's probably in large part thanks to the success of Jones' long-loved sister location on Los Osos Valley Road in the Laguna Village Shopping Center.

"We've been at it 15 years. We love the college kids; they filter in like the tides, but the local regulars really do come in every day," Jones said during a quick break from front register duties at the new 2,770-square-foot location. "I have locals that went to elementary school, then junior high, then ditched high school to come into Nautical Bean, and now they're bringing their own kids in here."

This is why, five days a week, Jones can be found behind the bar at one of his two thriving family owned coffee shops. It's pretty evident that "the grind" just isn't a grind.

Jones got into the food and beverage game in a roundabout way. In the late '90s, he and a fellow college friend studied abroad in Kingston. Growing up in Fresno, it seemed like a fun adventure. That's where Jones landed his first restaurant gig, at a pub nestled along the Thames.

"It felt like a small town, everyone knew everyone," Jones said. "I'd ride all the buses and trains; I learned the English Underground like the back of my hand."

The trip only lasted four months, but it left a lasting impression on the 21-year-old. Jones learned a lot of things—like how to make customers feel at ease, how to pour a proper beer, and how to care for the bar (it was of paramount importance to lock the doors when overzealous soccer hooligans blustered through).

"I've always been a people person, and I've always loved to talk," Jones said. "I was like, 'I can get paid to do this?' I loved doing everything at the pub, from cleaning the bathrooms to getting to know the locals—every part. The locals would even take me out to grocery shop or shoot pool."

Heading back to the states and settling into studies at San Diego State, Jones dove into the vibrant bar scene, where whipping up drinks is as important as (if not more than) chatting up the locals and creating a welcome "third place" between home and work. Jones "re-met" his current wife of 17 years, KJ, also bartending at the time (she just so happened to have gone to high school with Jones back in Fresno). Not unsurprisingly, the bar scene eventually burned the couple out. The lovebirds relocated to the Central Coast in the early 2000s, where Jones' parents had also settled. They wanted to start a family and cultivate real community.

"My parents were in the roofing business, and although I had no problem selling roofing, I didn't exactly love it," Jones said of that transitional time. "When they decided to get out of roofing, they said, 'What about coffee?' I said, 'Sounds good.'"

But Jones knew pretty much nothing about the coffee industry.

No prob. Up for anything, Jones quickly got a job at the Nautical Bean on LOVR. A far cry from today's ambiance: vibrant red walls, skateboards, and pop culture memorabilia, the old LOVR Nautical Bean featured taxidermied fish and hideous brown carpeting.

There, Jones learned all he could about running a coffee shop while his partners—his parents—began work building a family coffee shop on the Nipomo Mesa. When that venture fell through, Jones didn't skip a beat. Turns out, the owners of Nautical Bean were looking for a buyer.

From 2002 to 2018, the little coffee shop that could has grown into a tried and true hangout known for fresh, quick breakfast and lunch options as well as a curated list of specialty coffee drinks. Nautical Bean's Nutty Bean coffee, an exclusive hazelnut roast you can purchase by the cup or the bag, rose to cult classic status. During that time, the family also opened and shuttered another location, this time downtown. 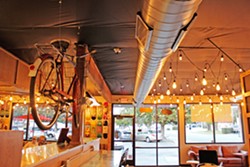 "It took a long time for me to come into my own as a restaurateur. I kept building things as I thought people would want them to be," he said. "It took closing the downtown shop and going through a depression to say, 'Screw it. I'm going to do everything the way I want to do it.' People really started responding. It just took off."

Nautical Bean is a true coffee anomaly. The business isn't geared toward third wave coffee snobs or corporate drones. It's something else. Something a little more approachable, more "SLO."

"A customer said I nailed SLO: It's kinda crazy, it's kinda weird, but it's still clean and organized. It's organized funk," Jones said with a laugh. "It's a place for the community, where anyone can come in, my kids can come in. I teach this to junior high kids on career day: You gotta be true to yourself. I noticed that when my happiness was there, it spread. People could feel it. I'm not a big 'vibes' person, but the customers can feel the energy we've poured into both locations."

The new digs offer all the same menu items you crave from the OG establishment (including pastries, bagels, wraps, salads, flatbreads, and sandwiches), but you've just got more room to chill out. Cozy nooks abound and the foyer is sunny and bright, the perfect place to sip on your Shot in the Dark chai latte or Rainforest Latte (my fave, made with soy, chai, and matte).

Local beer and wine will be available soon, and live music and events are slated for later this year.

Yes, you can still get that signature Nutty Bean Coffee, but now you can totally play a game of Mr. Do, Dig Dug or Ms. Pac-Man after you do.

Just don't forget to high-five Jones on the way out. Trust me, he's there, and he's stoked.

Hayley Thomas Cain is searching for her long lost can of Aqua Net at hthomas@newtimesslo.com.