You don't need to be a Christian to love Needtobreathe. The band frequently releases material with no reference to their Christian faith, and though they've won more than their fair share of Gospel Music Association Dove Awards with 15, they've also been nominated for a Grammy and a couple Billboard Music Awards. Though they're favorites of Christian adult contemporary radio stations, they also receive airplay on mainstream stations.

Early in their career, the band purposely passed up Christian record label deals to avoid being limited, telling Rolling Stone in 2016 that they make music for "everyone," and that they "hate the idea" that people would pass them over because of being labeled a Christian band. They've had major label deals with Atlantic and Elektra, and as far as they're concerned, they're simply a rock band with one platinum single, four gold singles, and a gold album.

Since their inception in 1998, they've released eight studio albums, most recently Into the Mystery (2021), created in an old historic house in Columbia, Tennessee, where the quintet—Bear Rinehart (vocals, guitar), Seth Bolt (bass, vocals), Josh Lovelace (keys, vocals), Randall Harris (drums), and Tyler Burkum (guitar)—"lived together, ate together, laughed together, and recorded together for three weeks in the fall of 2020," according to press materials. "It's the kind of record that could only be made by a band who has been through it all and still has enough faith to keep encouraging one another."

This Thursday, April 28, check out Jeffrey Halford & The Healers (7:30 to 10:30 p.m.; 21-and-older; free) at The Siren. Halford, a rustic Dallas-born singer-songwriter, grew up "listening to Roger Miller on a $2 transistor radio," according to his bio. "In 1963, his parents, Colin and Effie Lou, headed west with their two young sons to a Los Angeles beach town in their '59 El Dorado. By the time Halford turned 18, he and his family had crisscrossed California multiple times."

A few of the singer's claims to fame include "worst attendance record in his high school graduating class due to trouble at home and some minor clashes with the law," busking with Harry Spider and Jimmy Ventilator at the corner of Market and Powell in San Francisco, and playing with the likes of The Blasters and Beat Farmers.

Also at The Siren, witness the return of Prince tribute act The Purple Ones on Saturday, April 30 (8 p.m.; 21-and-older; $20.50 plus fees at eventbrite.com). The 12-piece band features a full horn section and delivers a potent homage to the Detroit great.

When you're mentioned in the same breath as Bob Dylan, John Prine, and Tom Waits, I think you've made it, but in case you're still not a believer, read a couple verses of Hayes Carll's "You Get It All": "All my tame and all my wild/ All my man and all my child/ All my faults and all my scars/ All my sometimes lucky stars/ All my joys and my regrets/ All my old Guy Clark cassettes/ I knew the night we met that you'd get it all// All my lows and all my highs/ All my truth and all my lies/ All my rights and all my wrongs/ All my 'From now on' love songs/ All my future all my roots/ All my worn out cowboy boots/ I kick off in the hall, you get it all."

With a voice like a well-worn pair of jeans and melodies like mountain brooks, Carll creates music that feels like home. Hayes Carll—with support by Anna Tivel—plays SLO Brew Rock on Friday, April 29 (7 p.m.; 18-and-older; $20 general or $100 VIP experience at ticketweb.com). He's garnered two Americana Music Awards, a Grammy nomination for Best Country Song, and multiple Austin Music Awards. He's also had the most-played record on Americana radio twice. If you're not familiar, now's the time. 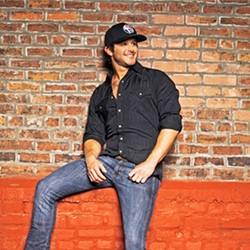 Fremont Theater and Country Roots present Easton Corbin on Wednesday, May 4 (8 p.m.; all ages; $47.50 plus fees at seetickets.us). The 40-year-old burst onto the country music scene in 2010, generating off his self-titled debut two No. 1 singles: "A Little More Country That That" and "Roll with it."

The Florida native has one of those super authentic-sounding country voices—a twangy baritone that can emote in one song and be playful in the next. Check out "Marry That Girl" and "Lovin' You Is Fun" to see his range. He recently signed to Stone Country Records.

"They let me do what I want to do and let me be me, which is very important," he said in press materials. "I do love traditional country music. That sound is what drew me to country music as a genre. One of my very first records was a Merle Haggard album when I was a kid. The way he delivered a song, the emotion in his songwriting and in his voice, he was just the whole package."

The Sam Chase & The Untraditional returns for another For the Folks show at Bang the Drum Brewery on Saturday, April 29 (doors at 7 p.m.; $15 presale at forthefolksmusic.com or $17 at the door; all ages). "They always put on such an endearing and theatrical performance along with stellar musicianship," organizer Ben Bellizzi said. Mothra opens.

Portland-based Charts headlines The Ale House this Saturday, April 30, with local powerhouses Hot Tina and Thrown Away opening the show (6 to 9 p.m.). I checked out Charts online, and their track "Fadeaway" started like a psychedelic surf rock number before morphing into a rockabilly bopper and back to surf rock again. On "Number One," they embody a jangly British invasion vibe. Cool sounds! Throw in the punk rock mayhem of Hot Tina and this show is one for the books.

SLO Town Parks & Rec is hosting a free concert at the Jack House this Sunday, May 1 (1 to 4 p.m.) with jazz act Crustacea Band. Bring a picnic and enjoy the gardens. For $5, you can also get a docent-led tour of the historic house.

Mission SLO celebrates its 250th anniversary with a free concert this Sunday, May 1 (3 p.m.). ProCathedral Choir, Mission Singers, and Youth Singers will be accompanied by violin, trumpet, piano, and mission bells in a program of music celebrating the past to the present. No tickets or reservations needed. Just show up! Δ