Rebecca Chaiklin and Eric Goode direct this seven-part documentary about big cat owners who run roadside zoos and attractions. The main character is Joe Exotic—aka Joseph Allen Maldonado-Passage—a gay polygamist with two husbands who sports a dyed-blond mullet and a six-shooter pistol at his side, and who fancies himself a country singer. He runs an Oklahoma roadside zoo that specializes in a tiger cub petting. There's also Bhagavan Antle, who runs a slightly more upscale zoo that employs several beautiful young women who are Antle's lovers residing in various houses on his rambling property. Finally, there's Carole Baskin, a self-described animal rights activist who owns a big cat sanctuary run largely by unpaid volunteers. Her goal is to put people like Joe Exotic and Antle out of business. She also may have killed her husband and fed him to her big cats. The rivalry between Baskin and Joe Exotic eventually leads to a murder-for-hire situation, in this twisted true-life story. (seven 45 min. episodes) 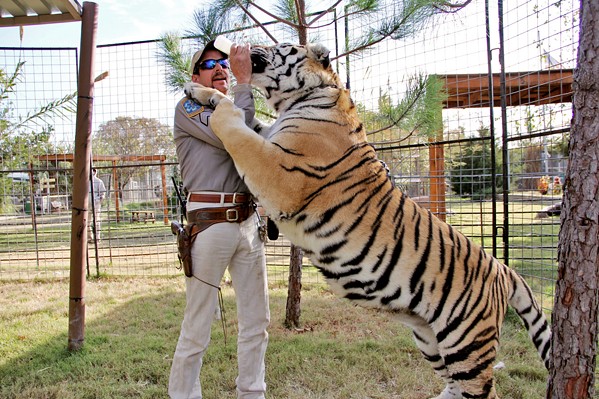 Glen Judging from my Facebook feed, most of my quarantined friends have already dipped their toes into this weird tale, so it almost seems like old news, but in case you're hunkered down in your house unaware that Tiger King exists, this is a look into a train wreck you didn't know you needed to see, but you do. Personally, I'd love to play with a 6-week-old tiger cub! It's a powerful draw, and the desire to be around these magnificent creatures apparently turns people nuts! Joe's two husbands aren't even gay, but between Joe's larger-than-life personality, his collection of exotic animals, and an apparently endless supply of meth, John Finlay and Dillion Passage are drawn into Joe's world—a world of competition with Baskin, who Joe frequently kills in effigy on his internet TV program Joe Exotic T.V. As I watched, I couldn't believe my eyes, and as Joe's paranoia increases, he's soon surrounding himself with criminals, con men, and worse. It's quite a tale.

Anna This thing really has exploded. People are obsessed with Joe and his red-necked weirdness. This story wasn't new to me. I listened to the Wondery podcast Over My Dead Body: Joe Exotic when it came out a while ago. (It's rereleased under the title Joe Exotic: Tiger King.) I will say that this series should come with a warning: There's clearly a lot of disregard for animal welfare, and it can be difficult to bear. Joe makes his money through cub petting experiences. He travels to malls around the country doing his animal/magic show. Baskin works to stop this, waging a campaign to shut down Joe's shows and his zoo. His workers seem loyal but heavily flawed—this series is basically an unintended advertisement for staying away from drugs. I think this whole story is totally fascinating, but I caution its audience to be aware of the language and tone used. Joe's no hero or innocent man in a bad circumstance. He disregards the well-being of his animals and exploits cubs taken far too early from their mothers, all to make a buck. He resorts to criminal behavior if he thinks it's justified. He's far from a good guy.

Glen I wholly agree. I also think Baskin, even though she portrays herself as the savior of big cats, is pretty shady. I don't know if she killed her husband, who basically bankrolled her animal rescue before disappearing into the ether, but her early career with big cats toyed with the same sort of abuses she's now fighting against. Nothing wrong with having a change of heart, but there's something hypocritical about her self-righteousness. Essentially, everyone in this story either seems to be an exploiter or the exploited. Joe, Baskins, and Antle are all cults of personality surrounded by sycophants. We also meet some really creepy types, like self-described businessmen Jeff Lowe and James Garretson, who have insinuated themselves into Joe's life and business just as he's spinning wildly out of control. The documentary's subtitle is accurate: murder, mayhem, and madness indeed. These people are nuts!

Anna One thing it brought to light for me is how little restriction there is in some places regarding owning and breeding exotic animals. It isn't a cheap lifestyle either—Joe resorts to feeding his animals past-date meat from Walmart and cows that died before they could be slaughtered. Healthy animals don't drop dead, and as someone who knows how animals in agriculture are cared for, I hate to think what those cats are ingesting. Baskin is problematic, too. Her "sanctuary" is no different than Joe's: just cages with big cats stuck in them for life. She may not be breeding and exploiting cubs, but she's by no means free of wrongdoing. As far as her missing husband goes, who knows? It's an added salacious detail but still a mystery. This has a very The Wild and Wonderful Whites of West Virginia vibe, like watching a white-trash train wreck with no shortage of drama. If you can handle the crazy and are a fan of watching chaos from the other side of a fishbowl, have at it. I found it fascinating. Δ