The Arroyo Grande City Council will look very different after the results of the Nov. 6 elections, while Grover Beach's will remain virtually unchanged, according to unofficial voting totals.

As of the morning of Nov. 7, sitting Arroyo Grande City Councilmember Caren Ray was ahead in the race for mayor against two-term incumbent Jim Hill. According to the unofficial election results, Ray received more than 51 percent of the vote, putting her ahead of Hill by 238 votes. 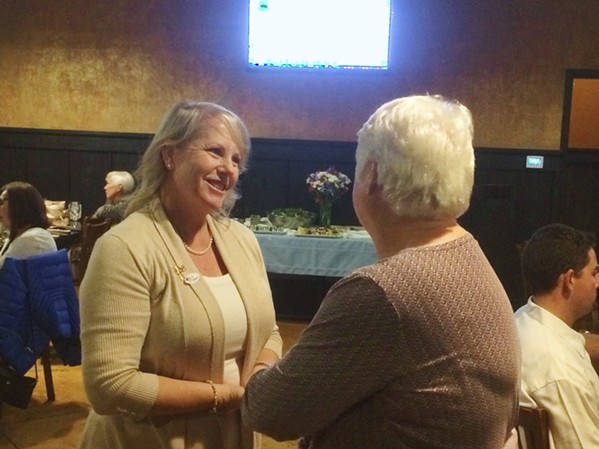 "I ran on a platform of moving our city forward," Ray told New Times. "I see my job as helping the city have the constructive conversations we need to have to do that."

If her lead holds and she is elected mayor, Ray said she hopes to focus helping the city look for new opportunities for economic development and addressing issues with the Five Cities Fire Authority, all while keeping the small-town feel of the city that its residents cherish.

"We need to make sure we keep an eye on preserving who we are as a community," she said.

Two new faces will likely be joining Ray on the council. Former SLO police officer Keith Storton and Jimmy Paulding, who ran and lost a bid for SLO County 4th District Supervisor in the June primaries, were on track to be elected to two open seats on the Arroyo Grande City Council. Paulding, who spent more than a year of combined campaigning for both races, said he was exhausted but happy with the results of the election.

"It was a really rewarding experience," he said. "It's nice to know that all the hard work paid off."

Storton said this was his first time running for political office, said he was also pleased with the preliminary results.

"I felt like we ran a very clean and optimistic campaign," he said. "It was really a community-driven message."

Because sitting councilmembers will likely be elected as mayors, both Arroyo Grande and Grover Beach may have to fill a vacant seat on their respective city councils. The councils have a range of options to fill vacant seats, including calling for a special election or developing a process to appoint a new council member.