The Whale Entanglement Prevention Act introduced on Feb. 10 proposes that trap fisheries such as the crabbing industry use ropeless gear by Nov. 1, 2025, to stop the injury or accidental death of endangered marine life. 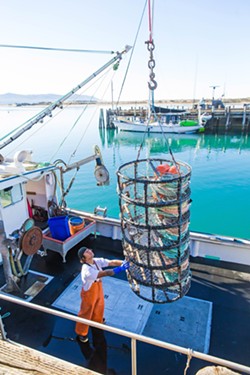 Authored by Assemblymember Rob Bonta (D-Oakland) in collaboration with Social Compassion in Legislation and the Center for Biological Diversity, Assembly Bill 534 argues that crabbers use antiquated trapping gear that needlessly harms marine life.

California Coast Crab Association President Bejamin Platt said the industry has been against ropeless gear because it's not cost-effective—the current price for the gear is more than $1,700.

"This is a particularly expensive gear type that no fisherman could afford and its incredibly slow and inefficient compared to what we do," Platt said.

Dungeness crab fisherman typically use circular steel traps that are submerged onto the seafloor. The traps are attached to lines marked by floats on the sea's surface that fisherman can pull to retrieve their traps.

The legislation proposes crabbers use ropeless gear with wireless technology that summons the trap back to the surface. However, several start-ups are still in the gear prototype testing phase.

Platt said that the fisherman have less than a minute to pull a pot from the ocean, rebait it, and put it back in the water.

"This [ropeless] gear, which every prototype that we've seen so far takes from eight to 10 minutes for each pot to be called back. It's an electronic signal that has failed 20 percent of the time. So if I've got a 400-pot permit on my boat and I lost 20 percent of my gear every time I went out to try this gear, I would lose 80 pots. I'd be out of business within a couple of trips," he said.

The Dungeness crab industry has taken its own steps to reduce the potential for entaglements. On March 2020, Fish and Wildlife approved the Lost or Abandoned Dungeness Crab Trap Gear Retrieval Program, a practice that Platt said many ports in the state already participate in.

At the end of every season, fishermen go out into ocean and look for abandoned or lost traps and return them to the owner, who pays a fee for its return. If the owner refuses to accept a crabpot's return, their permit allocation is reduced. The industry also created a best practicies guide, which calls for reducing the length of the buoy lines attached to traps.

AB 534 is the Center for Biological Diversity's latest move in its pursuit to eliminate entanglements. In 2017, the organization sued the California Department of Fish and Wildlife for failing to prevent commercial Dungeness crab gear from entangling, injuring, and killing humpback whales, blue whales, and sea turtles in violation the Endangered Species Act.

The parties settled the lawsuit the following year and created the Risk Assessment Mitigation Program (RAMP), which looks at data and analyzes where/when entanglement risks are higher to dictate the start or closure of Dungeness crab fishing seasons. Center of Biological Diversity Oceans Legal Director Kristen Monsell told New Times that while the RAMP regulations are a good first step, it doesn't eliminate the risk to marine life entirely.

"Those regulations only apply to commercial Dungeness crab gear. We know that whales and sea turtles are getting tangled up in other fishing gear," Monsell said. Δ