"The SLO County Sheriff's Office continues to hold its employees to the highest standards regarding the appropriate use and reporting of force, whether on or off duty," Sheriff's Office spokesman Tony Cipolla told New Times. 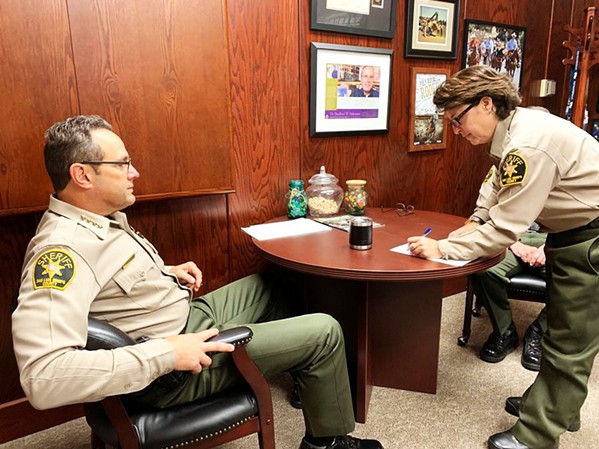 Under SB 230, by Jan. 1, 2021, each law enforcement agency is required to maintain a policy that provides guidelines on the use of force that includes: using de-escalation techniques and other alternatives to force when feasible, specific guidelines for application of deadly force, and factors for evaluating and reviewing all use-of-force incidents.

The law also required courses of instruction for regular and periodic training of law enforcement officers in the use of force.

The bill would also mandate that the agency's use-of-force policy be accessible to the public.

Cipolla said the Sheriff's Office has a comprehensive use-of-force policy, procedures, and investigative guidelines that its personnel are trained on and mandated to follow.

Those guidelines are presented to the agency's personnel at the academy prior to graduation and continually as part of their in-service training, which includes recertification. The training, he said, was recently updated to incorporate the newly passed regulations.

The public can view the Sheriff's Office's policies and procedures through its website.

Locally, when excessive force is either alleged or believed to have taken place, Cipolla said, the agency has a Professional Standards Unit that conducts an investigation.

The unit seeks to understand whether the involved deputy's use of force was legally justified given the state and federal standards as well as the facts and findings of the case. The completed criminal investigation is presented to the SLO County District Attorney, who is responsible for determining if the deputy was criminally culpable.

There is also an administrative investigation conducted by the unit leading up to, during, and immediately after the alleged use-of-force incident—the findings are given to the sheriff.

If a deputy's use-of-force is deemed to be administratively out of policy, the involved deputy could be subject to discipline, which starts with counseling up to and including termination, Cipolla said.

The bill is companion legislation to Assembly Bill 392, signed by the governor in August. That law states that officers may use deadly force whenever doing so is "necessary" under the circumstances—current law uses the term "reasonable." The switch makes it clear that law enforcement may shoot or use deadly force only when necessary to prevent death or serious injury to the officer or others.