The silhouette of the Diablo Canyon Nuclear Power Plant is an iconic and familiar sight for Central Coast residents—two giant bell-shaped reactors perched atop the cliffs overlooking the Pacific Ocean.

Diablo is the state’s remaining operating nuclear power plant, and has both opponents and fans. One side pushes to shut the plant down over seismic safety concerns, while the other insists that the jobs and tax revenue that the plant and the company that runs it, Pacific Gas and Electric, bring into the county are vital. 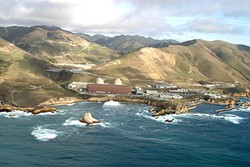 But what would happen if the plant, which plays such a large role—for good or ill—in SLO County were to cease operations?

Finding out the answer to that question is the subject of a bill proposed by state Sen. Bill Monning (D-Carmel) earlier this month. The proposed bill, called SB 968, would call for PG&E to submit an independent assessment of a temporary or permanent shutdown to the California Public Utilities Commission.

“The economic welfare of the county is highly dependent on PG&E,” Monning said. “It would be prudent to find out just what the economic impact would be.”

One of the entities that benefits from a large chunk of that tax revenue is the San Luis Coastal Unified School District. According to Monning, the district received an estimated $10 million, roughly 12 percent of its operating revenue, from tax dollars generated by PG&E.

Ryan Pinkerton, the district’s assistant superintendent of business services, said that money goes into the school district’s general fund and pays for everything from providing extra programs for students to staffing and salaries on its campuses.

“That’s a lot of teachers and instructional aides and classified folks and administrators,” Pinkerton said. “[Losing the funds] would be a tough thing.”

It’s not just tax dollars that Diablo brings to the community either; PG&E also makes substantial charitable donations and grants in the local area. According to the company’s website, PG&E spent more than $1 million on “community investments” in 2014, with employees chipping in an additional $578,000 in charitable giving the same year.

Figuring out just how a potential Diablo closure would negatively affect the county is something that the Alliance For Nuclear Responsibility, a self-described ratepayer watchdog group, has wanted for years. Speaking to New Times, Alliance Executive Director Rochelle Becker said the organization was glad to see the bill proposed.

“Just beginning the dialogue is the most important part of this bill,” Becker said.

She said being proactive about studying the potential impacts of a plant closure could help SLO County avoid some of the negative impacts suffered by other communities that experienced the sudden closure of a nuclear power plant. While Monning cited the closing of the San Onofre Nuclear Generating System in 2013, Becker said a more appropriate comparison would be closure of a nuclear power plant in Kewaunee County, Wisconsin, the same year.

Similarly to SLO County, the community surrounding the power plant was highly interdependent on the jobs and tax revenue it generated. A study conducted after the plant’s closure revealed a host of negative impacts to the area, including the loss of the tri-county area’s largest employer, a $6.1 million loss in state and local tax revenue, and a staggering $72 million loss in annual wages. In total, the report estimated that shuttering the plant resulted in a $630 million impact within a three-county area. The report relayed the dire struggle as the community looked for solutions to make up for those losses.

“The challenge for the region’s stakeholders will be to rapidly bring some of the new economic opportunities to the foreground, stimulating new economic activity that will help buffer the impact of the closure of the Kewaunee Power Station,” the report stated.

Becker called Monning’s bill “groundbreaking” because it seeks to address the same questions in advance of a theoretical Diablo closure and spark a long-overdue discussion about possible mitigation measures.

When and if the plant will close is still unknown. Operational permits for the plant’s two reactors expire in 2024 and 2025. In 2010, after the Fukushima Daiichi nuclear plant disaster in Japan, PG&E put its application renewal on hold. Plans to pursue that renewal are murky as of late, with company spokesman Blair Jones telling the Los Angeles Times in January that the company has “not set a timeline for a decision.”

Jones told New Times that the company was still looking over the bill. “We are actively reviewing the bill,” Jones said. “We perform Diablo Canyon economic analyses every few years and it’s important information for the community to have.”