An alliance of advocates, local law enforcement, and Cal Poly officials is trying to spread the word about a new tool for survivors of rape and sexual assault.

On March 22, representatives from RISE SLO, the SLO Police Department, the SLO County District Attorney's and Sheriff's Office, Cal Poly SAFER, and others gathered to let the public know about the free resource known as "Seek Then Speak." 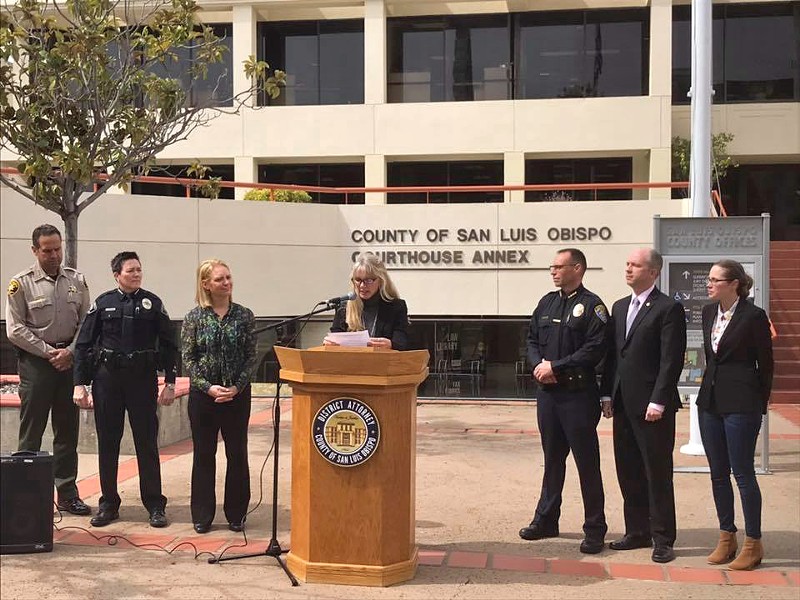 Seek Then Speak is an online tool accessible via computer, smartphone app, text, or phone. The tool helps guide victims of a sexual assault through a series of questions that can help them connect with support, services, and—if they choose—law enforcement. According to a statement from RISE issued before the tool's debut in SLO County, Seek Then Speak is available in more than 60 languages and was designed to help close gaps in the delivery of services to victims. It also aims to help promote justice and healing for survivors.

"Seek Then Speak is an alternative, trauma-informed way for survivors to tell their stories," Jennifer Adams, RISE executive director, said in the statement. "It empowers them to take control of their healing, and, when they are ready, choose to access advocacy services or connect with law enforcement."

The deployment of Seek Then Speak occurs as RISE and the city of SLO are working to address and prevent sexual violence through a program called Close 2 Home. This program was enacted in part because results of a 2018 New Times investigation found that SLO city led the county in reported rapes, yet it had the fewest number of rape cases filed in SLO County Superior Court by prosecutors. The story, in concert with national statistics that indicated that 63 percent of sexual assaults are not reported to the police, showed there was a "great need" for more efforts to prevent sexual violence, according to a 2018 RISE press release.

RISE announced that it was bringing the Close 2 Home initiative to the city in December 2018. The program will be carried out in four phases over the next four years. Δ