Joe Tarica, editor of The Tribune, started his journalism career at the then Telegram-Tribune in 1993, just a few months before the daily newspaper moved out of its digs on Johnson Avenue to a new building on South Higuera Street. 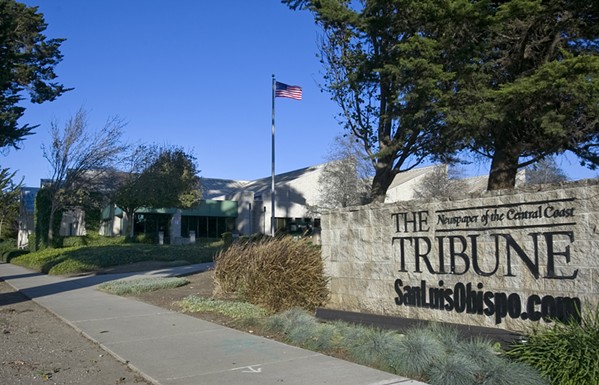 The new office was large—formidable, you might say—built to house an entire standalone publishing operation.

"That was a growing moment [for the paper]," Tarica told New Times. "The building was really well-designed for what we did. [It has] nice natural light, high ceilings and windows, the press room in the back—all the functions that we needed."

But in recent years, with each 21st century disruption of the news business, those offerings grew less and less vital. The press closed a few years ago, as McClatchy, The Trib's parent company, consolidated its papers' printing to cut costs. Following nationwide trends of declining ad revenue, the paper's staff shrunk. All that industrial space just wasn't needed anymore.

So after more than 25 years of doing local journalism at that office, Tarica and The Tribune are moving to a new home. April 11 marked the paper's last day on South Higuera. Starting April 15, they'll be located at 735 Tank Farm Road, a smaller and more suitable office for the newspaper in 2019.

"It's a much better setup for our operation now," Tarica said.

Speaking with New Times on their last day at the old building, Tarica said the transition has been bittersweet. In the process of moving over the past few months, the staff has dug up countless gems from the annals of Tribune (and, therefore, SLO County) history—old clippings, notebooks, artifacts, photos, camera bodies, and more, not all of which can be kept.

"It's really a walk down memory lane," Tarica said. "We had to make some hard decisions on some of that stuff."

One previously buried item that made the cut for the new digs? A framed copy of one of The Trib's original business licenses, dated to the 1880s.

"We're finding some of these things we didn't know existed," Tarica said

Given all the stuff that's surfaced, Tarica said he's reached out to the SLO History Center about preserving material that's important to local history.

As far as the new office, Tarica said he'll host an open house in the near future to give the community a chance to check out where their local daily is made. While smaller, the space has all the latest tech needed for a modern news outfit.

For those worried the move signals a decline in its news coverage, Tarica said not to fret.

"It doesn't reflect any loss or lack of commitment to journalism in this county," he said.