The new face of journalism at New Times isnâ€™t really a new face at all. 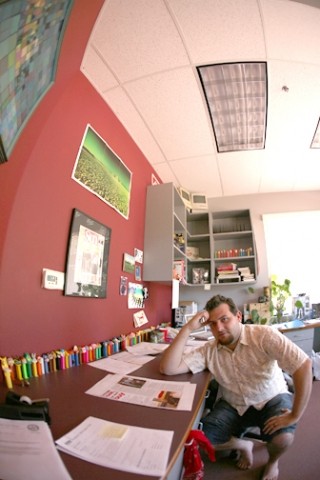 # Shortly after receiving the go-ahead to purchase controlling shares in both the New Times and the Santa Maria Sun, the papersâ€™ managers also named Andrea Rooks editor of the Sun. Miller will still have a hand in that publication as executive editor, a title last held by founder Steve Moss.

Miller has been the Sunâ€™s editor for the past three years. He started there as an intern in 2000, while he simultaneously acted as opinion editor at Cal Polyâ€™s Mustang Daily. He graduated from Cal Poly with a journalism degree in 2001.

Rooks has been news editor of the Sun for the past four years, and will now oversee the day-to-day editorial functions of that paper, while Miller will have broad oversight of its direction.

â€œSteve Moss was a monumental journalistic mentor to me,â€? Miller said. â€œAnd King Harris was my first Cal Poly journalism professor. I have some large shoes to fill. I know I wonâ€™t fill them in the exact same way as my predecessors have, but Iâ€™ll strive to wear them well.â€?

Ownership of New Times had been in limbo after Mossâ€™ death in April 2005.

The executor of Mossâ€™s will, SLO attorney Scott Radovich, requested from the SLO court permission to sell the Moss estateâ€™s interest in both the New Times and the Sun to Rucker and Alex Zuniga, the current art director. Rucker and Zuniga also currently own part of both papers.

The two prospective owners must now secure funding to solidify the papersâ€™ leadership.