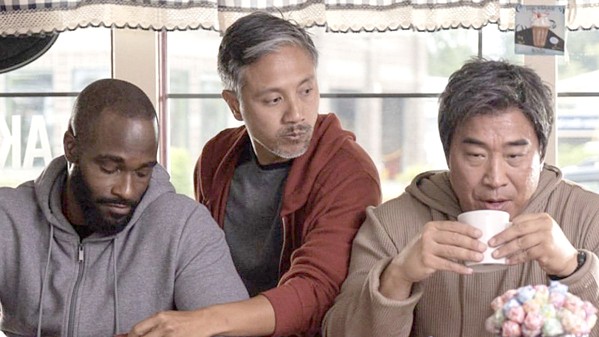 In his feature-length debut, writer-director Quoc Bao Tran helms this action comedy about three former kung fu prodigies—Danny (Alain Uy), Hing (Ron Yuan), and Jim (Mykel Shannon Jenkins)—who've grown into middle-aged nobodies with dead-end jobs and dad duties. When their old master, Sifu (Roger Yuan), is murdered, however, they have to put aside old grudges to avenge his death.

Genuinely funny, with a lot of emotional heft—thanks in part to Danny and his strained relationship with his wife, Caryn (Jae Suh Park), and young son, Ed (Joziah Lagonoy)—the film manages to offer some authentic kung fu action as it winkingly dismantles the model minority myth. Mathew Page stars as Carter, Danny's old kung fu nemesis who unlike Danny has stuck with martial arts and embraced Asian culture to the point of gross cultural appropriation. He's definitely the butt of the joke.

This independent film turned down Hollywood financing because Tran and its producers didn't want to turn the lead character into a Caucasian played by Bruce Willis, so they looked to Kickstarter to get initial funding and found other investors. Thank God! Hollywoodizing would have stripped the soul from this small but mighty film. (108 min.) Δ