To track upcoming events, or to book catering services, visit baguetteabout.it. You can also follow the food truck on Facebook and Instagram @baguetteabout.it. The city of San Luis Obispo's inaugural Monday Meet-Up is planned for Monday, June 28, from 5:30 to 8 p.m., at Emerson Park in San Luis Obispo. The weekly event will feature food trucks and live entertainment.

Liegl and her business partner, Thomas Hernandez, celebrated their grand opening earlier in June following more than a year of brainstorming and building their dream mobile kitchen, all while holding down day jobs.

Originally from Leipzig, Germany, Liegl relocated to Palo Alto in 2011 and worked on web-design projects at Stanford University. A year later, she trekked south to Cal Poly and presently works at the school's Robert E. Kennedy Library as a senior experience designer. 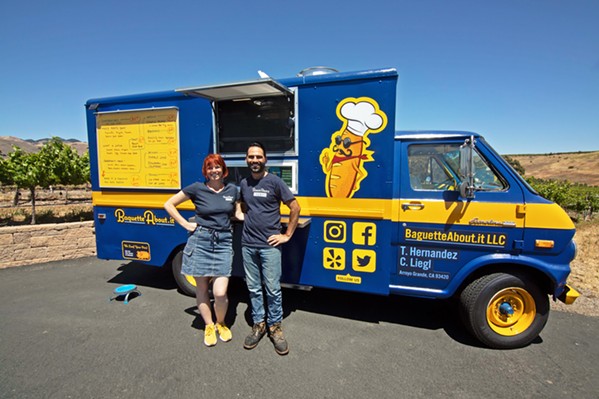 Apart from her artistic talents, which came into play when painting the food truck and creating marketing material, Liegl is also a baker.

"I started cooking and baking with my grandma when I was a child, and always expressed my love through food," Liegl said. "Hosting dinner parties and cooking at get-togethers with friends has always been my favorite pastime."

"I have always had a creative, expressive personality and love being around people," Liegl said. "In 2020, I registered a cottage kitchen out of my home in Arroyo Grande, and started baking treats for neighbors and friends."

Liegl still runs that kitchen, but it has taken a back seat while she and Hernandez get the food-truck business rolling.

The duo met in March of 2020, Liegl said, "and while talking to each other, we realized that we shared a dream of owning a food truck one day. We share a passion for food and customer service."

Hernandez has more than 15 years of experience in the food industry, with stints throughout the country at several restaurants featuring varied cuisine. He was born and raised in Riverside, with later years spent jockeying between the Central Coast and Boise, Idaho, where he has family. He landed his first restaurant job in Paso Robles at The Dish, which has since closed.

Currently, he said, he lives in Oceano and is the cook and manager of Pismo Beach's Honeymoon Café, where he "developed his love for creative recipes with regional ingredients and sustainable practices."

In discussing a possible joint venture, Liegl said they conducted surveys with customers and wineries, and decided the time was ripe "for us to share our values of healthy, nourishing, and tasty food in response to the need for good mobile food."

They ultimately registered the business name BaguetteAbout.it, then started searching for the ideal food truck.

"We were thinking of a creative name that is punny, easy to remember, and captures our menu in one word," Liegl said. "We love French baguettes, and knew we wanted to create new sandwiches and crostini, so the name made perfect sense for us. As the name is also the web domain, we spell it with the dot in our marketing."

The next step was to find the perfect truck. After looking at used vehicles in both the Bay Area and SLO County, they stumbled upon a 1972 Ford Econoline posted on Facebook Marketplace. Liegl said the truck belonged to a Templeton restaurateur "who actually played with the thought of converting [it] into a mobile food truck, but opted for a brick-and-mortar instead. So we bought the run-down truck for $6,500 and completely restored it."

The team meticulously rebuilt the truck—assisted by electrical and plumbing contractors—adhering to stringent health and building codes, while ensuring the kitchen components and exterior aesthetics reflected their unique style.

Additionally, Liegel said, "I built the website and designed the logos, and started marketing BaguetteAbout.it across social media. We invested $40,000 into the business. I own 75 percent of it, Thomas 25 percent.

"Finally," she continued, "10 months after getting the truck, many late nights, and uncountable hours of work, we started our food venture."

BaguetteAbout.it debuted at the GBeatZ food truck location in Grover Beach on June 6 and already has bookings at wineries and special events lined up through September.

"We put a fresh flair on traditional favorites and offer sophisticated items on local, fresh-baked baguette sandwiches," she said. "We will be one of the only mobile food vendors in the 805 area that offers share platters and picnic-style foods for parties of two-plus, which is key to serving the many groups at wineries."

Their baguette provider is key to their success. While Liegl is an accomplished baker, the team realized that homemade baguettes posed an impossible time constraint.

"We tried every baguette in the area," Liegl said, and they eventually settled on Grover Beach Sourdough. "It's organic, it's local, it's the perfect crunchiness on the outside and fluffiness on the inside. It's what you would expect for a proper French baguette."

Jacob Town, who owns Grover Beach Sourdough along with his wife, Brooke, said he was honored to be chosen and also happy to support a new food business.

"We are very proud of our bakery and its growing reputation," Town said. "It is always very flattering when someone chooses us over any of the other bakeries because they are all doing a pretty amazing job."

The support from vendors, fellow food-truck operators, and customers falls in line with Liegl and Hernandez's core business motto: "Food creates community." They point to two food-truck associations/locales, and hope to further their common business goals.

"If we all got the jobs we wanted, we would all still be spread really thinly," Hernandez said.

According to their research, there are about 15 food trucks servicing the entire county, with several found Wednesday to Sunday from 11 a.m. to 7 p.m. at GBeatZ, a converted parking lot owned by Epic Entertainment.

Another resource is 805 Food Trucks, an online collaboration that will co-host the city of San Luis Obispo's inaugural Monday Meet-Up. The weekly event kicks off Monday, June 28, from 5:30 to 8 p.m., at Emerson Park in San Luis Obispo, and will feature food trucks and live entertainment.

BaguetteAbout.it, Cubanissimo Cuban Cuisine, Philly Food Truck, and Plant Ivy (featuring vegan food) will be on-site, according to SLO Parks and Recreation supervisor David Setterlund. The event seeks to "reestablish community and contribute to our sense of place and belonging," he said.

Liegl and Hernandez also plan to donate 3 percent of their monthly proceeds to the SLO Food Bank, which provides resources to nonprofit groups throughout the county.

At the end of the day, the duo said that making food for people makes them happy.

"One of my greatest joys in the restaurant is when I make something for somebody," Hernandez said, "and you see them nodding their head when they eat it, doing the happy dance, or sharing it with somebody next to them. Nobody gets in arguments with food. Food is happiness.

"Food is everything we need." Δ

Mediterranean Side Salad from BaguetteAbout.it

Salt and pepper to taste

In a small bowl, mix dressing ingredients. In a large bowl, add salad ingredients. Just before serving, drizzle dressing over salad and toss to combine. Serve with slices of fresh baguette.

Flavor writer Cherish Whyte loves a fresh baguette. Reach her through the editor at clanham@newtimesslo.com.