New halfpipes are coming: on pace for bureaucracy, too slow for skaters 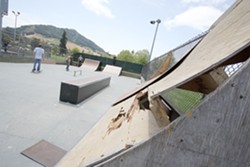 The city of SLO still won’t commit general fund dollars to building a new skate park, but the project is slowly moving from concept to reality. On Sept. 1, city council members approved a contract to design the park that has, until recently, been more of a halfpipe pipe dream.

RRM Design Group—the same company that last year drafted the conceptual master plan for a new concrete skate park—was awarded a $154,990 contract to create the technical design for the park. The master plan, which cost the city $37,000, was approved by the city council and skaters, but didn’t provide such building specifications as how tall features in the park will be, materials needed, and other details. With design in hand, officials from the SLO Parks and Recreation Department will have a better idea how much the new park will cost, which is so far estimated to be about $1.4 million.

City officials have declined to commit any money from the general fund while revenues are slim, so parks officials dedicated just more than $1 million from a special fund toward skate park construction costs.

Christine Wallace, a parks supervisor, said the department applied for two grants, which together could bring in $225,000 to help ease the financial pains of the construction cost. Other funding could come from corporate sponsorships, even as specific as company names for certain features of the park. Think: The Black and Decker Grinding Rail. Or something similar.

But there’s still a large gap in the funding, which puts a large chunk of responsibility on the skate community. Even if the city wins both grants, local skaters will still have to pony up about $100,000 to $150,000. Without the grants, those numbers are closer to $370,000.

“We still have a long ways to go,” Parks and Recreation Director Betsy Kiser said.

She estimated the design will take about seven to eight months, with construction completed no earlier than two years from now—a reasonably normal pace on the bureaucratic speedometer but a crawl for young skaters, some of whom believe the project is all but dead and the city just doesn’t care.

One local skater at a SLO skate shop said he’d been turned apathetic by the slow progress, and he believed the city was more interested in ticketing and otherwise condemning skaters than in giving them a place to skate.

Marty Cosgro is a self-proclaimed skater parent and one of the main fundraisers for the project. He’s set up collection canisters at area skate shops and estimated nearly $3,600 has been collected so far—not including other local fundraising efforts. Still, he greed that some skaters feel disenfranchised by the funding shortfall and lengthy project timeline.

Cosgro’s outlook: The fundraising is going well and parks officials are fully committed to the project.

“It’s always been pretty high on the priority list,” he said. “It’s just been, you know, it’s a long process.”