The one thing we can say is permanent about life is change, and within the Central Coast wine and food industry, local vintners and chefs have proven that change usually means something better. You need only look at the pioneers who started growing and making wine in Paso Robles or the Santa Maria and Santa Ynez valleys to see the truth of that statement. Richard Sanford, one of the earliest pioneers in Santa Barbara County, had the foresight to plant grapevines in a region that's now renowned for the extraordinary Pinot Noirs grown there, the Santa Rita Hills American Viticultural Area (AVA).

Richard Sanford's name is honored among the best of Santa Barbara vintners, and deservedly so. However, there's been a change that few wine lovers are aware of: The visionary winemaker is no longer associated with the winery that bears his name. After selling his shares of his eponymous brand to his partners in Paterno Wine Company over philosophical differences about organic farming, Richard and his wife and partner Thekla walked away. Now they've reinvented themselves under another new brand they named Alma Rosa, and they're producing an excellent lineup of Pinot Noirs and Pinot Gris. They explained that their brand represents the culmination of their life experiences and their commitment to organic and sustainable agriculture. 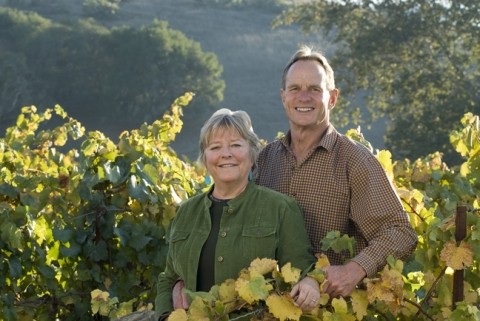 # It's been 37 years since Richard (and Michael Benedict, his then-business partner) planted Sanford & Benedict Vineyard on the westernmost edge of Santa Ynez Valley. Formerly a geologist, Richard realized that the unique blend of geology, climate, and soils he found there in 1971 were exactly what he hoped to find. He wanted grow Pinot Noir and Chardonnay that rivaled the great Burgundies in France. The east-to-west traverse of the Santa Ynez and San Rafael mountains, unlike other mountain ranges in California, draws wind and fog from the Pacific Ocean directly over the valley. Richard recognized the cool climate's potential for producing extraordinary wines without neighboring vineyards for comparison. He founded Sanford Winery on Santa Rosa Road in 1981.

Richard once told me: "Santa Barbara County started with a Heinz 57 style of planting. Then, we planted everything. Now we know which varietals to plant in the right locations. I had a hunch 30 years ago, and to have it all come true is extremely gratifying."

None of his neighbors imagined then that the Pinot Noir vineyard would be the variety for which the Santa Rita Hills AVA is now acclaimed.

Richard and Thekla have been committed to organic and sustainable business practices for 24 years. In 1983, they planted Rancho El Jabali vineyard at their homestead, followed by La Rinconada and La Encantada, all of them within the Santa Rita Hills AVA. All three vineyards are organic, the first in Santa Barbara County accredited by the California Certified Organic Farmers. In 2004, when he sold Sanford Winery, Paterno also acquired La Rinconada Vineyard.

"At Sanford, they're advertising Sanford as the same name with different players," Richard said with a laugh. "Here, we're the same players with a new name."

The Sanfords' home is part of the Mexican land grant Rancho Santa Rosa, which inspired Richard and Thekla's new label, Alma Rosa. Alma, which means "soul" in Spanish, was chosen to reflect their belief that their wines express the soul of the ranch.

"Sales of Pinot Noir are very strong, thanks to Sideways," Richard said.

Tourists aren't that interested in taking the "wild" wine tour featured in the movie anymore--but that's good news. Still, the film's impact on wineries is unforgettable.

"Sideways helped establish Pinot Noir to a new audience," Richard concluded. "People recognize the quality and the elegance of Pinot Noir, and it has broader appeal."

I first met chef Pandee Pearson when she arrived in Morro Bay six years ago and discovered we had traveled similar trails early in our food careers, yet our paths had never crossed. Both graduates of the California Culinary Academy (CCA) in San Francisco--she in December of 1988 and I in August of 1988--we both worked for celebrity chef Wolfgang Puck but at different restaurants: Pandee worked for the Austrian-born chef at his original American restaurant, Spago, in Beverly Hills, and I worked at Postrio in San Francisco.

"Corny as it sounds, moving here was just meant to be," Pandee said then. "It's beautiful here, and I don't see anything we don't have here that Napa has."

And she worked in Napa Valley at one of my favorite restaurants, Mustard's Grill. When Pearson took the helm in the kitchen at Windows on the Water, I was impressed by her style and her excellent palate. She made a delectable bouillabaisse so perfectly, I'll never forget it. Last fall, when it was announced that she had left Windows on the Water, the news surprised me and most of her peers.

Since then, I've been impatiently awaiting the opening of her new restaurant, Adelina's Bistro at the Monarch Club, located in Trilogy in Nipomo. A Shea Homes development, they've given Pandee the freedom to create an upscale eatery the way she'd plan her dream restaurant. The small bistro will offer breakfast, lunch, and dinner daily. They've also built a deli/market for fresh produce, cheese, wines, local olive oils, and freshly made dishes residents can enjoy there or take out to eat at home. She also built a pizza oven into the kitchen.

She's planning cooking classes for the Monarch Club members, but also wants to offer them to the public. If all goes as Pandee hopes and she can get back in the kitchen, you can expect to see a March 1 opening of Angelina's Bistro. Her menu will be driven by the market, just as she created her outstanding dishes while at Windows on the Water.

"My menu will change daily to showcase the freshest foods in the market," said Pandee, who's committed to supporting local farms. "I'll buy really high-quality ingredients and buy locally when possible."