Billy, 41, who lived on the streets of San Luis Obispo for nearly three years, said he sees one clear silver lining to the COVID-19 pandemic: It drew the public's attention to the homelessness crisis.

"The pandemic may have been one of the best things that has happened to the homeless community in SLO," said Billy, who asked New Times not to publish his last name.

COVID-19 certainly wasn't easy on Billy. He battled an opioid addiction, was arrested more than a dozen times, and watched friends die on the streets. But he also saw an outpouring of care, compassion, and resources from the SLO community that he'd never seen before.

"The community at large started to react in a manner that wasn't phony philanthropy any longer. It was practical philanthropy, people trying to feed us and provide clothing, food, and tents," he said.

Billy recently got off the streets. He entered adult drug court last fall and quit opioids while at the Gryphon Society sober living home in Atascadero—a place that "absolutely changed my life."

Then, about a month ago, Billy moved into his first apartment in years at ECHO Paso Robles, a former Motel 6 converted into Housing Authority of SLO low-income housing during 2020 thanks to a $15 million state Project HomeKey grant.

Billy now has a home, a job, and a car, and he's working toward reconciling with his children.

"Nine months ago, I was doing heroin in the creek with the hope every time I did I was going to die," he said. "Today, I'm halfway through the second phase of the adult drug court program and eight months clean. Because I've been shown some resources, my perspective has completely and vastly changed."

Billy received a lifesaving housing opportunity in ECHO Paso Robles. But he knows that hundreds of others on the street today haven't been so lucky this year. For now, they remain unsheltered, facing their own unique set of challenges, with some caught in the crosshairs of encampment sweeps in local creek beds and parks.

"A lot of my friends are still out there," he said. "They need to be given a place that is safe harbor."

SLO County and all of its communities are grappling with a rise in unsheltered homelessness. While no official count has documented the increase since the start of the pandemic, front-line social workers say a surge is obvious.

"I can only hope we're at a peak," said Janna Nichols, executive director of the Five Cities Homeless Coalition.

As the problem hits new heights, local jurisdictions are creating a regional and collaborative partnership on homelessness—a process that they say will lead to new projects, shelter options, and a 10-year plan for the county's homeless. In the meantime, some local leaders are calling on the county to start implementing a new set of encampment recommendations outlined last month by a county advisory committee.

But not all of the focus is on new ideas. In the city of SLO, officials are trying to get the most out of an existing resource: the 40 Prado Homeless Services Center. 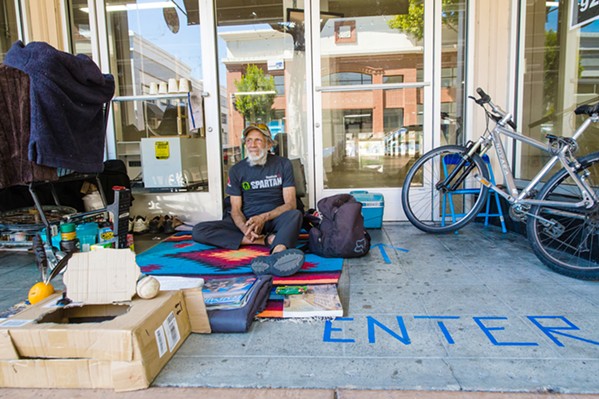 40 Prado fully reopens and expands—will it fill up?

For most of the pandemic, the 3-year-old 40 Prado Homeless Services Center in SLO operated at a reduced capacity of 70 beds instead of 100—a COVID-19 precaution. But on most of those nights, the shelter didn't come close to reaching that capacity.

"COVID made everything go upside-down," said Grace McIntosh, deputy director at CAPSLO, which operates the shelter.

When COVID-19 hit, McIntosh explained that most of the shelter's younger residents left, and the shelter became predominantly occupied by the elderly. The trend toward housing more seniors had been happening for a couple of years, she said.

Seniors are a growing subset of the U.S. unhoused population in general, but McIntosh said a key issue in SLO County is that skilled nursing facilities have stopped accepting low-income, long-term care patients.

"The reality was that skilled nursing was no longer a resource," she said. "Now what we have is this rising number of elderly people that really can't be here, shouldn't be here, so they're shuttling back and forth to the hospital and here."

With pandemic restrictions lifted, 40 Prado is working to get the word out that it's fully open for business again and is hoping to serve a broader age range of residents on its way back to full capacity.

But 40 Prado isn't exactly a popular resource. Advocates told New Times that the center has a rocky reputation among the unsheltered community, which may have played a factor in its lack of use throughout COVID-19.

"There's a bit of resistance in the community to receiving services at 40 Prado," Nocket said. "Part of what I want to do is better understand what those resistance factors are."

McIntosh and other SLO officials said there are some misconceptions about 40 Prado's rules and policies, which have changed over the years and again just recently due to the lifting of pandemic restrictions.

The current rules are that 40 Prado residents simply need a SLO County ID and they do not need to have a full year of residency in SLO County (which was a pandemic rule). The shelter is not a "zero tolerance" facility for drugs and alcohol (though no drug use is allowed on-site). And the shelter is pet-friendly, with eight kennels available for non-service dogs (with rabies vaccinations required).

Nonetheless, four homeless advocates told New Times that Prado's "institutional" approach and structure are imposing and can make it an unwelcoming place for some. Michelle Mansker, a volunteer with SLO Street Medics, which delivers resources and first-aid response to the locally unhoused, said that based on her outreach, she doesn't feel like 40 Prado tries enough to "meet people where they are."

McIntosh said she doesn't expect 40 Prado to be the solution for every person. But she also anticipates that the facility will hit capacity, especially as COVID-19 eviction moratoriums are lifted. Her biggest concern is that SLO County simply lacks the shelter to house everyone living on the streets.

"Even if we had every bed taken [at 40 Prado], it doesn't address the need," she said. "There's not enough shelter beds, affordable housing, tiny homes, sanctioned encampments, whatever the answer may be." 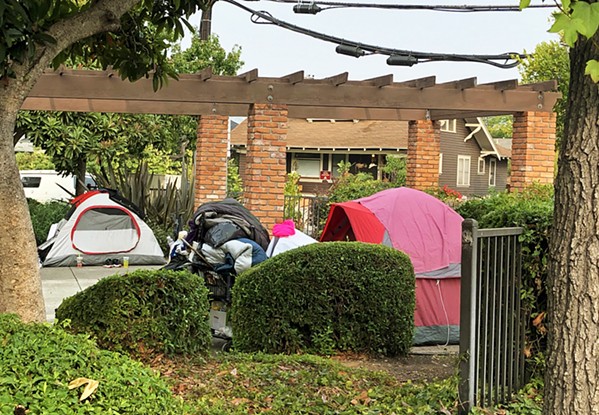 Camping, public spaces, and other ideas

SLO County 2nd District Supervisor Bruce Gibson said he often hears from frustrated constituents on the North Coast about the impacts of homeless encampments in Los Osos and Cambria.

He sometimes asks this question in response: "Would the Cambria community rather have a sanctioned encampment, or folks living out in the creek or forest?"

In 2019, a federal court ruling, Martin v. Boise, made it illegal for municipalities to enforce anti-camping codes unless they can provide enough shelter beds for their homeless population. In SLO County, since the pandemic, encampment clear-outs have occurred on a regular basis, with 40 Prado's vacant beds cited as the available alternative shelter.

Whether or not that meets the legal criteria of Boise, Gibson and others are proponents of pursuing more low-barrier shelter and service options, like sanctioned encampments, to try to redirect unsanctioned camping away from fire-risk areas or dangerous spaces.

"It's a big deal," Gibson said. "There are legal constraints, financial constraints, there's the spirit of the community we need to align. The other challenge is that we really need to take this on as a region." 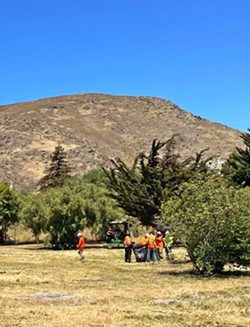 Nichols with the Five Cities Homeless Coalition said the variety of options to support unsheltered individuals is a welcome approach. Her organization is an advocate for a South County shelter, but she said diversity is important.

"Some people don't want to go into a shelter. That's the thing I think we have to work on," she said. "There isn't one model. There isn't one thing. There's no one answer."

Services that could be brought to an encampment include: trash collection, safety and sanitation, syringe collection, overdose prevention, and shower programs. In 2019, SLO County piloted a similar program—the Blue Bag program—with success. Programs like SLO Bangers syringe exchange already do some outreach to encampments.

Paso Robles tried creating a sanctioned encampment in 2020 but it was underused and then closed. Lois Petty of the SLO Bangers said the camp was poorly located on an exposed dirt lot without shade.

"The one in Paso was clearly set up, in my opinion, to fail," Petty said. "The showers sometimes didn't work. They had a handwashing station that wouldn't get filled with water. It felt like they were being imprisoned because there was a fence around it."

Alternative housing options could include tiny home villages, pallet houses, or another congregate facility. Becky Jorgeson of Hope's Village SLO has been searching for property to house a tiny home village for eight years.

"The community village is my model, because it's a mini city—a little town where people know each other and watch over each other," Jorgeson said.

While the recommendations will take time to digest, Gibson said he wants to see the safe parking programs prioritized as early as this summer. SLO city runs the only safe parking program in the county at the SLO Railroad Square, and it's currently underutilized.

"The situation is critical right now," Gibson said. "We are going to be judged by the quality of our leadership and the commitment of county resources to actually do something about this." 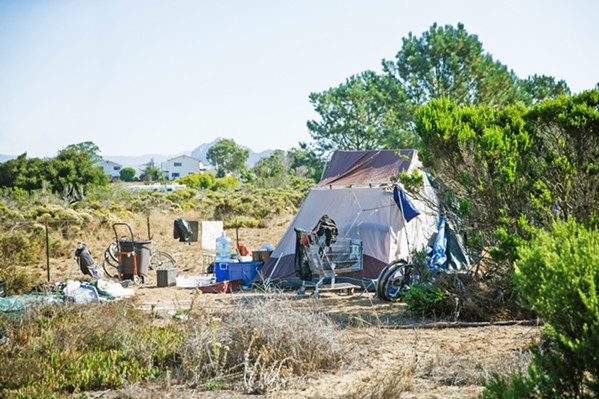 Working as a region

As SLO County and its cities commit to a shared and collaborative approach to tackle unsheltered homelessness, that route comes with both opportunity and challenges.

"One of the things that's going to be needed is an agreement across the partners about options to pursue," said Laurel Weir, SLO County's homeless services director. "This is not something that any one jurisdiction can solve. The county [administration] has been starting to convene meetings with the cities."

Weir said that the first steps in the partnership will likely take shape as pilot programs adopted in individual communities. SLO city is rolling out one this year, a Mobile Crisis Unit, where a social worker and EMT will respond to non-emergency 911 calls related to homelessness.

"The pilots are a chance to see what's working and what's not," Weir said.

Susan Funk, an Atascadero City Council member and chair of the county's HSOC, said each city has a common motivation to reduce the impacts of homelessness on those experiencing it and the communities affected by it.

What will be critical in the coming months is for communities to share the responsibility and burden of solutions, she said.

"The magic word is location," Funk said. "Everybody wants it somewhere else. Nobody wants to go first. We need some kind of solution in every jurisdiction."

Miriam Shah, a former Grover Beach City Council member, spoke during public comment during the May 4 Board of Supervisors meeting when it voted to approve the concept of a regional partnership.

"Everything we need is there," Shah said, referring to the encampment recommendations. "What we need are locations. Instead of two more years of meetings, I propose one meeting. All seven cities in a room and all supervisors in a room. Nobody leaves until every single person has named a location where people in their district can exist. Because we have to share this burden fairly. No amount of planning is going to get us around that ugly, ugly part of naming a location. It's just something that needs to happen." Δ

Clarification: An update to this article clarifies that the Housing Authority of SLO operates ECHO Paso Robles' low-income units.