A new organization focused on addressing race issues and equity on the Central Coast is pushing for more inclusive practices in the Lucia Mar Unified School District. 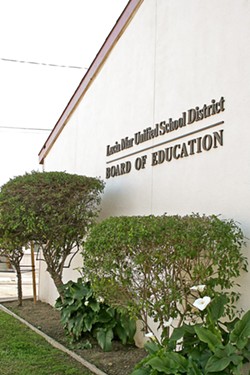 The Central Coast Organization on Racial Injustice—a group formed in early June that is dedicated to creating a space for local youth to address the racism, sexual harassment, and microagressions they often face in school—recently released a petition demanding that immediate steps be taken to make Lucia Mar's schools more equitable and inclusive for all students.

"We are students. We are alumni. We have had parents open up to us as well," The Central Coast Organization on Racial Injustice wrote in a statement to New Times. "There is a problem with [Lucia Mar] and it is time to change that. It is time for the district and administrators to stop being complicit in racism. BIPOC [Black Indigenous people of color] youth deserve to feel protected and most importantly, they deserve an anti-racist education that acknowledges the flaws of the country so that they may be better equipped to deal with those issues as they age into adulthood."

In the petition, which includes 11 demands, the organization asks that Lucia Mar ban all confederate flag and election insignia on school grounds; mandate ethnic and gender studies courses; expand more on the experiences of people of color and Indigenous people in the U.S. in social studies courses; diversify the literature taught in schools; create a club for BIPOC students; improve on-campus mental health services; improve faculty hiring practices to allow for more teachers of color; implement an end of the year survey on inclusion; put more restrictive regulations on military recruiters who go to schools to meet students; and become more accountable.

The petition, according to the organization, has about 100 signatures so far.

Hillery Dixon, Lucia Mar's assistant superintendent of curriculum and instruction, said many of petition's demands relate to issues the district is already working on.

"Lucia Mar is certainly not immune to that," she told New Times.

A group of especially eager staff formed, and they hope to attend the district's next board of education meeting, where they'll refine the group's goals and action plan for making Lucia Mar a more equitable district. The district eventually hopes to open the group up to community and student participation, Dixon said, and many of the issues outlined in the petition will likely be addressed. But the group is still in its earliest planning stages.

"None of this is easy or fast work," Dixon said. "So that's the phase we're in now."