New Times gets their groove on at the SLO Holiday Parade

It’s 7:30 p.m. on a Friday night, and most of us have just given up. We’re hot, sweaty, and tired. One of us is giving off so much steam, you’d think he was the background extra in a Prince video. If only! The reality was far more trying, both physically and emotionally. We made a float for the San Luis Obispo Holiday Parade.

When the idea first arose, it sounded supremely fun. A float, you say? Who doesn’t love floats—root beer or otherwise? And this was going to be a holiday float. Even better! We could finally enact our Managing Editor Ashley Schwellenbach’s long-held dream of recreating the dance scene from A Charlie Brown Christmas. Personally, I would’ve gone for one of the most family-friendly of Christmas movies and staged any scene from Die Hard. But A Charlie Brown Christmas should be easy, right? Slap on a few strings of lights, find a Snoopy costume, and dance the night away to the boppin’ piano beats of Vince Guaraldi. Sure. Super easy. 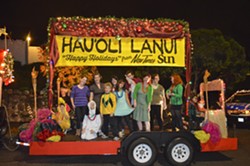 First, we couldn’t find a Snoopy costume. Unless you are somehow both a professional mascot and the son of a rich land baron, full-scale adult Snoopy costumes are thin on the ground. You could buy an Elmo costume for a pretty reasonable price. Who wants to be Elmo, though? He’s got to be the worst red monster since smallpox. So, what next?

From then on, everything seemed to go downhill. Our Schroeder had other obligations, leaving us without any piano-playing talent. The onslaught of holiday special issues had us buried neck deep in finding the perfect present for your pet under $50. At the last minute, we were asked to save the great city of New York from the threat of some metallic samurai villain.

Wait. I’m getting ahead of myself. That last one is from Teenage Mutant Ninja Turtles. Moving on!

Then, there was the weather. I believe it was Abraham Lincoln who once said, “Right when you think things are going swell with your Peanuts float, the rain cometh down to make your heads sloat.” Wow. Who said this Lincoln guy was eloquent? “Sloat” isn’t even a word, buddy.

The rain proved quite the pain though. On the Thursday before the parade, a crack team of New Times souls braved the downpour to build and paint the main components of our float. We thought that would be the worst of it. And then Friday showed up. Friday, with its intermittent showers that left us hauling pounds and pounds of cartoon props out of trucks and downstairs into our office/basement lair. I now understand how Noah felt.

All day long, we were on the brink of uncertainty not knowing if the parade was a go or a no. At 1 p.m., the Downtown Association made the call. It was on! So we got busy drilling, stapling (Schwellenbach’s new soulmate), stringing lights, hanging fabric, and getting drenched. When the evening neared, we donned our costumes, scarfed the remains of our holiday party grub (thanks Popolo Catering!), and headed out.

We found our place in the long line of high school bands, radio vans, and lighted trolley cars. It wasn’t even a contest. We were clearly the winners well ahead of the parade’s start. I mean, we had kids dancing as Woodstock, Snoopy, and Charlie Brown. We had a cardboard piano. We had frickin’ Pig Pen with grade-A, authentic mud! After a slight snafu with the music, we braced ourselves for the greatest performance of our lives.

“This is my Everest!” shouted Senior Staff Writer Colin Rigley as he strutted to the music in a fetching ladies’ turtleneck.

For 72 hours (OK, probably 20 minutes), we twirled, hopped, and nearly fell off the slippery expanse of our epic float. The crowd cheered, and the other floats jeered. In a haze of glory and exhaustion, we had finished. It was over. Time to kick back and let the parade after-party commence. Thanks New Times and Santa Maria Sun staff (especially Dora Mountain for designing and organizing everything)! Until next year!

Jessica Peña is still sweating. Send her refreshments at jpena@newtimesslo.com.