New Times learns about the mental-health toll of having coronavirus

Hospice SLO County Executive Director Shannon McOuat has always dealt with allergies, so when she noticed her throat starting to feel scratchy, she didn't think much of it.

On Friday, Dec. 11, McOuat and another individual—McOuat declined to name that person for privacy reasons—were in the same room together in a building at a safe distance with masks on.

Two days later, McOuat got an email from the individual notifying her of their positive COVID-19 test result. That's when McOuat's scratchy throat "became scary." 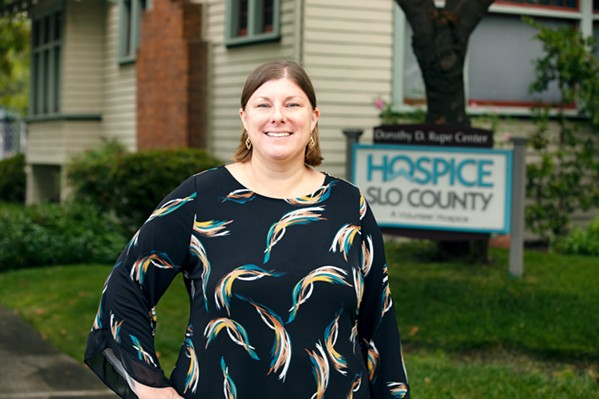 Thankful for the individual's email, McOuat said she promptly made an appointment to get tested the following Wednesday and decided to self-isolate after taking the test.

"After I got my test, I walked into my bedroom, shut the door, opened the window, and that was it," she said. "I was sort of in my mind working on the assumption that I didn't have it because when I got tested, the medical staff said my exposure was so minimal and unlikely. They were actually hesitant to even test me at all."

Three days later on Dec. 19, McOuat got her results back: She was positive. She describes her symptoms as going from feeling like she was fighting off a cold to not being able to get out of bed.

Neither her husband—he tested negative for the virus—nor her three sons got COVID-19, and McOuat stayed in her room, which had a bathroom attached to it.

She's still recovering—at the time of the interview, she had started to regain her sense of smell and taste, she described her brain as slow to fire up each day, and her sleep was often interrupted.

Aside from physical symptoms, McOuat says her mental health has been significantly impacted through this experience.

Medical organizations and hospitals such as the Kaiser Family Foundation, the World Health Organization, and Cedars-Sinai have released preliminary reports on COVID-19's physical impacts. However, researchers have yet to dive into the mental health aspects of contracting and recovering from the virus.

Cassandra Ueberrhein is a behavioral health clinician for the SLO County Behavioral Health Department who primarily serves Cal Poly students. If a student who lives on campus tests positive for COVID-19, the entire floor of their dormitory must quarantine due to possible exposure.

During that quarantine, Ueberrhein said, students go through the emotions of isolation, worry, anxiety, and uncertainty of potentially having the virus themselves.

While the students wait for test results, "they get a bit of cabin fever," she said.

These feelings extend beyond campus residents. A person can feel bored, Ueberrhein said, like they're missing out, and upset because of the restrictions placed on them until they know their test results.

During McOuat's illness, she sad she went to a dark place that was terrifying and lonely.

"Some of my thoughts went to, ... it was just really sad. I thought about if I die from this, you know, my children are going to grow up without a mother. That's where my head was going," she said.

At one point during her self-isolation, McOuat says she felt so weak she couldn't think.

"I just laid in bed. It didn't even occur to me to brush my teeth for four days," she said.

Isolated in her room, McOuat said her only companions were the characters of the Downton Abbey series she had playing on her TV as background noise. Her husband would barely enter the doorway of the bedroom to check if she was OK before leaving McOuat to her thoughts once again.

The nights were the most challenging, she said, because everyone in her home was asleep. She wouldn't get to hear her sons' voices, and no one would be able to check on her.

"As a full-time mom of three boys, I have joked about wanting a week alone in my bedroom or just a week alone," she said. "I will never make that joke again. I missed them fiercely."

She experienced fear, the fear of exposing someone else unknowingly or her household members. She felt confused, because McOuat says she's a clean freak and believed she followed COVID-19 safety guidelines as best she could. And McOuat said she felt shame.

All of these emotions are centered on something that is out of McOuat's control. One of the main practices Ueberrhein uses when working with a patient is helping them to focus on working toward accepting what they can't control.

"And then also working on focusing on the things that you can control, no matter how small," she said.

The focus can be on a daily routine or taking care of your body.

Ueberrhein finds it extremely helpful to validate the fact that both she and her patient are human beings who don't have all the answers or the right words to fix their current situation. Empathy can help that person work on what they can control.

When McOuat was able to come out of her isolation and get back into a routine of leaving the house and driving her car to run errands, she said it felt as though she had to reprogram her brain.

It was a lot all at once.

"I just felt very frazzled and unsure. I had high anxiety about coming into contact with anyone. I'll give the example of going to the grocery store and being around so many people after being alone for so long and being afraid of bringing COVID-19 back into my house," she said.

Ueberrhein suggests individuals who recover from the virus slowly ease back into interacting with the world safely.

This can be a situation where social anxiety or agoraphobia—the fear of a crowded place, leaving one's home, or being in a place where escape is difficult—could manifest for the first time or reemerge for an individual who already had these tendencies.

"Even though you want to maintain 6 feet and follow all the precautions, please go out into the world and be around people in a safe way," Ueberrhein said.

If a person puts off reentering society, that person is more likely to have worsening symptoms of social anxiety, regular anxiety, and depression.

Simple ways of reintegration could be taking a walk outside to get the mail, taking a walk around the block, and staying connected to friends and family through technology—Zoom calls, FaceTime, Google Duo, etc.

"But you don't want to go too long without being around humans at all," Ueberrhein said. "I do encourage, even if you're having a little bit of anxiety about it, to start slow but challenge yourself in small ways."

Just as easily as people can connect via smart devices and social media, she said, take the time to disconnect and get outside.

McOuat has been catching up on her work duties, spending time with her family, and reflecting on the "mental and emotional" toll the virus took on her.

She says she was lucky to have the space to recover and protect her family. But she hopes that sharing her experience will get the community talking about the mental health issues that can come with contracting COVID-19. McOuat acknowledges everyone's current feelings about the virus and its impacts and understands the fatigue of it all.

"But we have got to bunker down and take care of one another—and by taking care of one another, it's wearing a mask, it's doing all those things that we know we're supposed to do," she said. "This is real, it's in our community, and I hope people will take this seriously for just a little bit longer." Δ

Staff writer Karen Garcia is checking in on the well-being of her friends and family at kgarcia@newtimesslo.com.