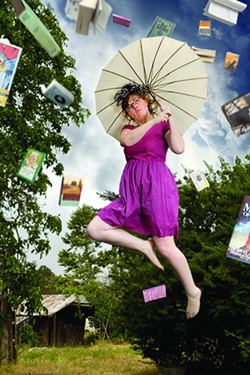 Ashley Schwellenbach, managing editor of New Times, admits she’s going for something of a niche market with her new young adult fantasy novel Scourge of the Righteous Haddock. Protagonist Emily Nevin Cann Bell lives at a remote boarding school for orphaned girls, where, unbeknownst to them, the things they write during class influence the world in unpredictable ways. The girls remain oblivious to this phenomenon until Damacias, leader of the Brotherhood of the Righteous Haddock, accuses the students of witchcraft. Schwellenbach, who will celebrate with a book release party on Friday, Aug. 30, took some time to talk about wasabi baptisms, Ayn Rand, religious zealotry, and literature’s great orphans.

NEW TIMES What was the initial idea or inspiration for this project?

ASHLEY SCHWELLENBACH The initial idea was literally a girls’ school for orphans high in a mountain pass, at which the students would write, and what they wrote would dictate what happened in the world. And I knew from the moment I had that idea that the nemesis would be a religious institution or figure. So it was pretty much exactly what happened in the book. It wasn’t like an image or a phrase, it was literally the idea that became the book. The central conflict was the first thing that occurred to me.

NT With the orphan story, and the boarding school high in the mountains, one thinks immediately of Harry Potter. Was that a conscious thing?

AS I did that very deliberately. There’s a couple points in the book where one of the girls says something about being an orphan: “Oh, who would want to write about an orphan?” And that’s a very deliberate joke, because long before Harry Potter there was a lengthy tradition of orphan protagonists. I would contend that Jane Eyre was kind of more the orphan inspiration, you have the strong female character who is ridiculously intelligent and has a very rich interior life, and obviously religion played a significant role in that book, too.

NT What do you think we love about orphans in literature? 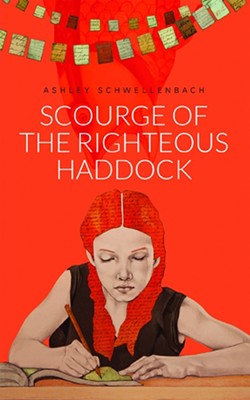 NT Who would you say was your most difficult adult character to write?

AS I think Damacias, my bad guy. I had fun with him, but I was very concerned that he might be just this bloodthirsty villain, just this unredeemable person for whom all the flaws of the entire universe are just dumped on his shoulders. I think it’s so simplistic to say, “When this person is gone, our world will be perfect.” I wanted to make the point that it’s not a perfect world by any means. Bad things still happen within this world. Damacias doesn’t introduce the bad things. I mostly wanted him to be someone who represented extremism, and in this case religious extremism.

NT Is the Damacias character modeled on a particular person?

AS He truly was not. Maybe I’m more quick to label someone an extremist than most people would be, but I believe that any time your beliefs cause you to malign a demographic of people, whether by race, gender, sexual orientation—I believe once you do that you are an extremist. And so I feel, honestly, like if anything, it wasn’t anyone I knew, it was mostly a lot of politicians. It was the type of personality who would build up a cult.

NT The condiment baptisms are an interesting initiation rite. How did that come to you?

AS That came to me pretty quickly. One of the things I wanted to do was play with the notion of a man-mandated expression of religion, versus something mandated by “God,” and I am saying that with quotes. I just think a lot of the things people do to express their faith, they come across as kind of silly. And I wanted to play that up. And I don’t think they’re silly because they’re an expression of faith; I actually think that faith is very important for people. But saying “God told me to do this” is silly, because, I’m sorry, God told you to dunk yourself in water? Instead, say, “I think this is a good way of expressing my faith.” Because, what’s the difference between God telling you to dunk yourself in water and God telling you to dunk yourself in ketchup?

AS That’s part of the reason I wanted it to be potentially painful too. That notion of, I have to show God that I respect, believe in, value him, so I have to hurt myself. That always struck me as so terribly barbaric: You want to believe in a god who wants you to hurt yourself? But that’s why I wanted some of the condiments—Tabasco, wasabi—I wanted there to be the potential for pain there.

NT There’s such judgment there as well. It’s like, “These holy men baptized themselves in wasabi, but it’s perfectly fine to wash yourself in honey … if you’re only a casual believer.’

AS It’s that notion that, “I’m faithier than you.” You can’t look into a person’s mind or heart. You can’t know what they truly believe, or how much.

NT During the first baptism, you have the character of Simon, who is skeptical. He doesn’t believe in any of it, but he’s a bit more political in the reasons he follows Damacias. But then it seems that after the baptism, he’s overcome with this rapturous joy in the midst of the believers. Were you modeling that on your own experiences in the church?

AS Absolutely. I was a Christian until I was 16. I went to Christian schools. I went to church. And I remember feeling—upon reflection, it was as much the ecstasy of having other people gathering together doing the same thing. You get the same swells of emotion. And I didn’t want to be just looking down on the people who follow Damacias. I wanted to make it clear that I understood; I wanted to be sympathetic. And I wanted to show how someone could go from not believing to suddenly feeling caught up in something. I was trying do everything very respectfully and thoughtfully, but I was hoping that even if someone disagrees with the book, it can be a dialogue and not a fight.

NT I also wanted to ask about the referential names of the girls in the orphanage—Emily, Beatrix, Ayn, etc. Ayn especially, because you don’t particularly like her namesake, Ayn Rand, but you tried to give your Ayn a little bit of humanity.

AS As I was writing her at first, I thought she was going to be this batshit crazy girl, storming through the halls, psychotically babbling her, what I consider, rather inhumane theories. However, as I started thinking about it, when I think of Ayn Rand, to me her defining characteristic is passion. I think she’s crazy and I don’t actually enjoy reading her, however, I have to respect that she’s a strong figure. I think the character itself shows how kind of ambivalent I am about Ayn Rand. I think that’s why she’s a strange character that may turn out to be more of a scene-stealer than I originally thought.