Fans fill Downtown Brew during the first ever Newties!

About 300 people squeezed into Downtown Brew last Saturday for the New Times Music Awards (NTMA), a competition that culled from 288 entries to pick SLO County’s Best Band, Best Solo Artist, and Best Song (see info box for complete results). Our panel of five judges also chose 20 tracks for the NTMA Top Twenty CD, which every concertgoer received with their paid admission (remaining CDs are for sale at the New Times office, 1010 Marsh St., for $5 each).

Readers got to vote from these 20 tracks for their favorite, and we received more than 6,300 votes! 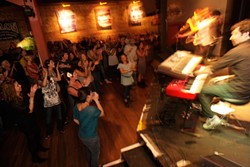 New Times thanks everyone who entered the contest, the 20 artists who appear on the CD, the artists who played the event, our sponsors: Ernie Ball Music Man, Downtown Brew, West Beach ’09: Music and Art Festival, and Dolphin Shirt Company. Most of all, New Times thanks the readers; in particular those of you who attended the contest and raised $1,000 for Arts Obispo’s Mini-Grants program.

It was a magic night, and Truth About Seafood, KO & Capriss, Red Eye Junction, Chase McBride, and Damon Castillo put on a helluva show! Here’s to looking forward to next year’s awards. Cheers!