For eons now, the New Times editorial office has been dominated by two names—Managing Editor Ashley Schwellenbach and Senior Staff Writer Colin Rigley. Combined, they’ve put in around 15 years, 20,000 cartons of cake frosting, 10 million hours of sarcasm, three Teenage Mutant Ninja Turtle action figures, and one battle ax into this office. And now, they’re headed off on a new adventure, to the wild streets of Seattle. We went around the office to ask the staff for their fondest memories of Colin and Ashley—the good, the bad, and the sugarcoated. Good luck, you two wackadoos!

There once was a woman named Ashley, who said she wasn’t afraid, to captain a newspaper, pull a few capers, and let the news biz shape her.

But then to her surprise, her staff it began to rise, with mutinous purpose they enlisted some Sherpas and sent her north to die.

Funny how little you really need to throw a heartfelt going away bash. Plastic cups, chocolate-covered potato chips (mega menstruation food), an array of booze that’s been hiding in the back of the cupboard for a decade, a few camping chairs brought by a wise friend, and a hookah. Because, really, you don’t need furniture to say goodbye to the ones you love, but you do need the Ghostbusters and the Kill Bill soundtrack spinning on vinyl. That’s how Ashley and Colin did “goodbye,” and it was absolutely perfect. During my relatively short time at New Times, I have come to find that Ashley and Colin simply make life more interesting. They can transform any bland small talk into the fierce, funny, and thought-provoking fodder of the newsroom.

They can make full grown men prance into the ocean at a whim; through their powerful writing, they were able to prod and celebrate the idiosyncrasies of our weird little town with passion, week after week. Their innate curiosity, lust for life, and readiness to stick to their guns has inspired me. We have lost a fearless writer in Colin and a fearless leader in Ashley—but I have faith that the defiant ripples they have created will continue to travel outward.

The first time I really “worked with” Ashley, I was sitting very still, as she pinned gobs of real food—pizza, sushi, lettuce—to my head for my New Times cover debut as cuisine writer. I had no idea what I was getting myself into. Ashley was unfazed by every obstacle that got into her way. When one food-sticking method fell through, she found another. I’d never seen someone work so diligently at such a delightfully absurd task. This, above all else, is the magic I will miss.

For many years, Ashley Schwellenbach and Colin Rigley were a major part of what made New Times quintessentially New Times. From Ashley came the madcap creativity, enthusiasm to explore different types of storytelling, and the social rhythm of the editorial staff—keeping us in check while also keeping us just the right amount of askew. From Colin came the investigative drive, the passion for pointing out injustice, and the wryly cynical sense of humor that epitomized New Times at its best. Their wit and whimsy will be missed, but change is ultimately healthy— both for them and for New Times. I salute Ashley and Colin for all the words they’ve written, issues they’ve edited, stories they’ve uncovered, and time they’ve given to this paper and the SLO County community. I wish them (and their two cats) all the best in the Pacific Northwest. 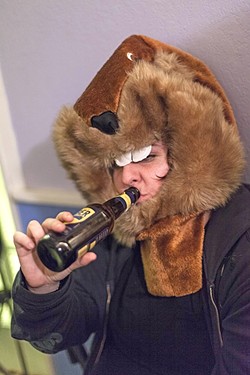 I walked into the New Times office last June: A nervous, slightly innocent 20-year-old who just wanted a way to occupy her summer that didn’t involve Netflix. I was totally unprepared for what came next. I’m not really sure how internships normally go. But I’m fairly certain that they don’t involve being spun into a dress made out of toilet paper rolls wearing a fake mustache, pelting people with Starbursts, or eviscerating a rainbow piñata with a sword. But that’s pretty much what you can expect working with Ashley and Colin. Are they both clinically insane? Yes, definitely, each in their own special way, like snowflakes. Together, they’re like the perfect storm. And by perfect, I mean absolutely horrifying and trauma-inducing. Thanks to them, I’ll probably never be able to function in a real office setting without making a poop joke. And thanks to them, I had the most ridiculous, craziest, and most immature 10 months of my life.

OK, you can go now. Son of a bitch, we’re sick of these dolphins. Have fun and good luck! Arts Editor Jessica Peña bullied most of these messages out of the staff. You can contact her at jpena@newtimesslo.com.