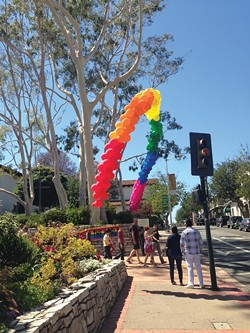 "You got some big ol’ titties up in the front here … you could feed the whole damn room with those things!” It’s an ultra-packed Friday night at SLO Brew when the emcee of DIVAS Live takes the stage for the annual Pride Weekend Drag Show, so I have trouble seeing exactly whose breasts we’re all supposed to be focusing on, but they must be impressive given the size of the breasts talking on stage.

Ten minutes into the show and I can already feel the pangs of jealous rage forming in my stomach over the fashion-forward wardrobes and incredible hair, all on men far more attractive than myself, so I head to the bar to order a Reggae Red beer to drown what remains of my self-esteem in booze.

I return to find my girlfriend and drag show date, Aileen Manley, craning her neck over a sea of drag onlookers, all experiencing an emotion somewhere between entertained, amused, mystified, and jealous. We can’t see the stage all that well, but I can tell from the yelps and whistles that special guest star Detox from Rupaul’s Drag Race has taken the stage in a beautiful blue wig and frame-hugging pencil skirt, effectively killing the last remaining shred of the charade that is my femininity. 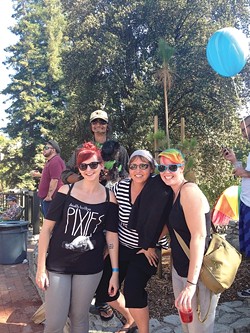 Aileen and I stay for the show and the dance party that follows where we desperately try to blend into the huge crowd of gay choreographers. OK, this is a stereotype, but come on gay dude friends, can’t you just throw a sprinkler or two in there to make the rest of us look better?

After choosing to spend all of Saturday recovering from the effects of Friday and playing a nearly violent game of Bananagrams, Aileen and I are prepped and ready to meet some of our favorite people downtown for the penultimate event of the weekend: Pride in the Plaza.

A rainbow of balloons greets us at the entry to the plaza where the beer is cheap and plentiful, the booths are stocked with an impressive array of LGBTQ T-shirts (and I’m still regretting not purchasing that “Vagitarian” T-shirt), and holy mother of god where are all you gays hiding the rest of the year? Seriously, I have never seen so many members of the LGBTQ community in San Luis Obispo, ever. As I am basking in a glow of pride and camaraderie, the main act of the event—Alex Newell from Glee—takes the stage and starts in on a heartfelt version of Icona Pop’s “I Love It.” 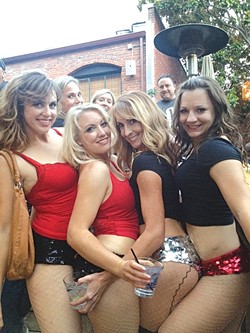 I watch people of all walks of life bob back and forth to the music, just as Newell hits the chorus of the song, “I crashed my car into a bridge … I don’t care, I love it.”

And suddenly I realize that I could be crammed into a dingy gas station bathroom with all of these people, and I wouldn’t care. We are all here and a little bit gay and a little bit proud … and I love it. ∆

Calendar Editor Maeva Considine likes both art and the occasional bash. Send your love and whiskey to mconsidine@newtimesslo.com.