New Times wants you to check out these movies

Penelope Maunsell and Kenny Dalsheimer bring you this documentary where art and architecture collide and the result is a public art crusade involving Georges Rousse--a French photographer and installation artist--and hundreds of volunteers. Getting back to a Warhol-like creative vibe, this group takes over Durham, N.C., and proceeds to transform public buildings into an art happening unlike any other in the town's history. A must-see for modern art lovers. (56 min.) 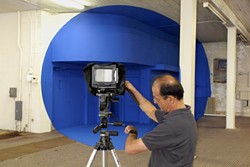 # Compa"eras is a surprising, bittersweet documentary about the first all-girl mariachi band in America. Although music is a constant throughout the film, it's only a catalyst to telling a larger story. Mariachi is more than a style of music, it's a way of life, and a language, and a history. It's also a man's world. Through interviews with about a dozen of the female musicians, Compa"eras tells a story about women struggling to resolve conflicting roles as mothers, professionals, wives, and role models, not merely as American women, but Mexican American women. While the story is at first inspiring, it soon becomes apparent that what the women have achieved is more symbolic than anything they still earn less than men, and they can't skirt their duties as wives and mothers, mostly because they don't want to. The film's greatest achievement is recognizing broader women's issues while honoring the women's individual stories, and it's not contrived, overly sentimental, or cliched. No matter the significance of the topics, the movie is entreating and generally lighthearted. Don't miss this one. (59 min.)

This visually and powerfully stunning documentary follows the lives of three refugees who may not be formally educated--especially when it comes to sex education--but learn through music at The National Music School in Luanda, the capital of Angola. Between the commercialism of the area--with Chevron, Coke, and satellite dishes making their presence known--and a 27-year civil war to recover from, there is hope. This yearlong journey shows that even with the hardest of challenges (one student left the family business to pursue a career in classical piano), these students still express themselves through the music they love, and hopefully, "begin to see the light." (72 min.)

You gotta love Erik Stein. Leave it to the premiere stage actor (and top notch comedian) to be in the funniest film the SLO Film Fest has to offer. Stein's innate talent is worth the price of admission to this totally unique--yet believable--tale of a man who chooses fish over wife. A fish who loves spinach, that is. Told mostly through a therapy session, Stein proceeds to explain his dilemma, a menage a trois between himself, his wife, and a fish. A Fish Tale should be on the top of your to-do film fest list. (16 min.)

In A Day's Time: Prison Music at California's Men's Colony

This film was shot by UCLA student Ben Harbert and is a documentary of the musical abilities and endeavors of the inmates at the prison. The movie focuses on beat boxers, rappers, guitar players, and singers who also explain their attachment to the music they play and their hopes for pursuing music outside the prison walls. The music is beautiful and the inmates are sincere and touching. The most unfortunate thing about this movie is realizing that CMC is a better environment for learning than your high school was. (32 min.)

A short film, with minimal dialogue, Liberte is a bit of mutiny for an increasingly autocratic world. When the main character, a prisoner, receives an inspiring message from outside, he begins to recognize that the walls of his jail are only in his mind. The special effects are a little hokey, and message is anything but subtle, but it comes together nicely with a playful tone and the seed of rebellion firmly rooted. (5 min.)

Where you can see it: Downtown Cinema on March 8 at 7 p.m.

# Fantasy paints itself with tiger stripes, pulls on a pair of fingerless leather gloves, and hacks its way into reality with Nerf swords. This documentary chronicles several seasons of LARPing (that's live action role playing to you noobs) with members of NERO Seattle. Think of it as Dungeons and Dragons meets World of Warcraft meets community theater meets summer camp. The players create alter egos--dwarves, sea elves, cat people--and give the game more attention than they do their jobs, relationships, and high-school degrees. Their individual stories are fascinating, but the film is most jaw dropping when it shows them banding together to repeatedly wallop confused newcomers in green T-shirts (i.e. "monsters"). (79 min.)

High-school student body elections take on Orwellian proportions in Oberschule, a black-and-white silent film light on sets and heavy on black eye makeup. Caricatures of standard teen stereotypes (jocks, loners, over-achievers) plot, plan, emote, and generally mug in front of propaganda posters and chalked backdrops. The lighting is somehow archaic, the acting is appropriately exaggerated, the puppet-master villain is perfectly megalomaniacal, and the mix of dastardly plotting and high-school cliques finds a hilariously comfortable, yet oddly discomforting balance in the randomly capitalized letters of the title cards. (15 min.)

Brought to you from one of the most prestigious film institutions in the country--AFI in Los Angeles--Smoke involves a smokin' hot couple, a smokin' hot stolen car, and, of course, smoke. And yes, where there's smoke, there's fire. In this case, fire comes in the form of Max, who wants his car back. But Son and Rachael are in love, and in love with stealing cars. This mysterious, fresh, and fluid short film provides more twists and turns than Mulholland Drive with its Pulp Fiction-esque style. (19 min.)

Where you can see it: Downtown Cinema on March 8 at 2 p.m.

Santa Maria native Nathaniel Nauert's film The Street Cleaner starts out a bit predictably and with some over-obvious foreshadowing--a serial killer targets prostitutes. The title also makes it pretty clear that the street cleaner in question takes his job title to a bizarrely literal level, and Nauert teases the audience along as viewers wait for the genre pay off, i.e. some sick and twisted stuff befalling unlucky, kidnapped, heroin-addicted hooker No. 5. There's minimal dialogue, which adds to the sense of mounting foreboding that will keep you watching--because you want to see what will finally break the silence. Will you get to hear the hooker scream? You have to watch to find out. (34 min.)

Josh Brolin! Josh Brolin! Josh Brolin! The dreamy (and underrated) character actor can add "director" to his resume with this beautiful, starkly bright short film focusing on a daughter (Brolin's real-life daughter) and her tattooed papa. Their journey begins on a very I-15-looking stretch of asphalt, and ends up in a funeral parlor. This funny, quirky, original piece is a must see, especially when paired with the much anticipated Dakota Skye at the screening on March 14. Much like its backdrop, X brings many twists and turns. (16 min.)

INFOBOX: Who, what, where, when