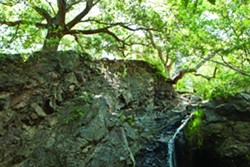 It’s just shy of 800 acres, and it’s a popular recreational open space with steep trails for hikers and panoramic views of the city of San Luis Obispo.

Thanks to years of work by the city’s natural resources staff and the Land Conservancy of SLO County, a conservation plan for the Reservoir Canyon Natural Reserve promises to keep the area in healthy shape for people to continue to enjoy, while also protecting its sensitive native plants and wildlife.

The reserve, located just northeast of SLO, is owned by the city and contains the Reservoir Canyon and Bowden Ranch open spaces, as well as the Upper Goldtree Vineyard tract lots that were acquired in June 2012.

The area is currently accessed through trailheads at the end of Lizzie Street near San Luis Obispo High School, as well as at the end of Reservoir Canyon Road off of Highway 101.

On Nov. 19, the SLO City Council unanimously approved the sweeping conservation plan following a presentation by Natural Resources Manager Bob Hill. The plan will serve as a guide for management of the open space area over the next seven years, and includes a number of improvements and additions to make the area more attractive to recreational use, and safer.

According to Hill, some of the area’s trails are in need of significant maintenance due to erosion from both natural and manmade causes, and a number of city-installed signs need replacing to better inform hikers about their location, as well as to warn against dangers such as poison oak.

In May, City Biologist Freddy Otte took New Times reporters on a tour through areas of the reserve and noted many spots where banks were eroding into the creek, and others where harmful activities such as off-trail hiking and illegal biking had caused stress to a number of banks along trails and creeks.

The overriding goal of the plan is really to protect the area’s sensitive endangered plant and wildlife species and their habitats, while also maintaining the biodiversity of the native plants, one of which is the endangered Chorro Creek bog thistle.

“The question here is, what is it about this property that we think is appropriate to protect?” Hill told the council.

According to Hill, the plan calls for a “stacked loop system” of trails that will interconnect, as opposed to the current system where hikers have to go back and forth if they want to travel the entire trail system. Two new trails are planned for the next seven years, including one that will connect the northern end of a ridge trail with the existing Reservoir Canyon trailhead, and another that will connect the western side of the ridge between Lizzie and Sydney streets.

Construction of the trails is set to begin in 2015, Hill said, and will take advantage of help from the California Conservation Corps and the Land Conservancy.

The plan also contains a number of legal agreements, including a trail easement across private property, a power line maintenance easement with Pacific Gas & Electric, shared water rights with a couple of neighboring properties, and the exploration of a possible conservation easement that would provide the best protection of the area past the seven-year life of the plan.

Members of the City Council were obviously pleased with the completion of the conservation plan and excited to see what it would bring for the city’s reputation as a good place to recreate in natural open space.

See the draft conservation plan at http://goo.gl/GHzzZP. More information can be found at the city’s natural resources website.