A storm was brewing. The ice cracked and broke as the ship made its way across the ocean. It was September 2015 in Iceland with temperatures hitting anywhere from 20 to minus 20 degrees Fahrenheit. San Luis Obispo native Chris Burkard and his friends were here to surf near the waters of Ísafjörður, a town on the country’s northern coast.

“This was a location that I’d been looking at for years on the map,” Burkard said. 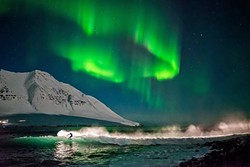 But little did they know that the storm brewing would be the worst to hit Iceland in the past 25 years. Burkard also didn’t know that this journey, which was a working trip with photos promised to a slew of editors, would turn into a surf adventure film, Under an Arctic Sky. Burkard and company have been touring the film across the country and Canada to promote the movie, which will make its SLO debut June 2 as part of the Wine, Waves & Beyond’s Surf Night Movie at the Fremont Theater.

While Burkard’s art studio (Chris Burkard Studio) is in Pismo Beach, he grew up in nearby SLO, engrossed in the county’s surf culture. When he started getting into art and photography, naturally his passions collided and took him down the road of shooting surfing and the great outdoors.

“I wanted that mobility of taking my art wherever I go,” Burkard said.

Directed and narrated by Burkard, the film follows him and a group of six surfers looking to catch some sweet, storm-fueled waves that no one had ridden before. In the past 10 years, Burkard has made more than 20 trips to Iceland, but still the siren song of those cold-water waves called.

Glorious waves break against a backdrop of snowcapped cliffs. It’s gorgeous and surreal.

“I’d always believed deep down that some of the best waves were here still waiting to be found,” Burkard’s voice boomed from the screen as the camera swept through the landscape. 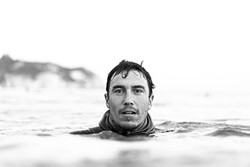 At the beginning of the film, the captain of the ship taking Burkard and his friends out to the surf sagely said, “You have to realize that you’re never in charge. Nature is in charge.”

And sure enough as the storm raged on, despite the best-laid plans, Burkard and team made the heart-wrenching decision to turn around.

But the trip didn’t end there. Hell-bent on finding a weather break where they could catch some waves, the crew jumped into a car to look for a spot that was a bit safer. They even drove through parts of a blizzard at one point before wisely calling it a night and bundling up in a cabin to wait out the storm. Eventually lots of gnarly surfing ensues, with all the guys clad in booties and surf hoods to stave off the cold of Iceland’s fridged waters. At one point a freezing wave snaps one of the guys’ boards in half. This isn’t surfing for wussies.

Was it the trip they’d planned? Not exactly. But Burkard said it was still more than worthwhile.

“The trip itself evolved,” Burkard said. “It started out as going to explore this area, but it’s really about the relationships you form in these wild places.”

Despite twists and turns, the surfers, and audiences, are ultimately rewarded with a sight to behold: surfers gliding atop foaming waves beneath the famous Northern Lights that are such a spectacular shade of neon green you’ll wonder how close by the aliens are. It’s pretty unreal.

Ultimately, Burkard said he hopes that Under an Arctic Sky will inspire viewers to step outside their comfort zone and seek adventure, whatever that looks like.

“Our goal was always to gather people together intimately and share our experience,” Burkard said.

Ryah Cooley is adding the Northern Lights to her travel bucket list at rcooley@newtimesslo.com.