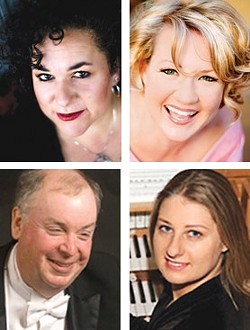 Greetings, Glenstarkians. My name is Victoria, and I will be sitting in for our esteemed music columnist for the next few weeks while he is on holiday. My credentials are … well, I like music and I sit right outside Glen’s office. Now, to get right to it:

You probably wait till the last minute to make your New Year’s Eve plans, because you’re cool like that. But you might want to reconsider this year, because SLO County is playing host to some pretty incredible NYE celebrations that will sell out, and you won’t want to miss them.

Take, for example, the best place to start the evening, which is at “New Year’s Eve POPS with the Symphony!”, San Luis Obispo Symphony’s 2013 celebration held Wednesday, Dec. 31, from 7:30 to 9:30 p.m. at the Christopher Cohan Center.

This two-hour concert will be jam-packed with favorites in jazz and light classical, chosen especially for variety and accessibility by conductor and musical director Michael Nowak.

The players for this special event are a fine representation of local talent, both native and transplanted. Pianist and Cal Poly professor Dr. Terrence Spiller will perform Gershwin’s timeless “Rhapsody in Blue;” Central Coast native and acclaimed soprano Sarah Kleeman will sing standards from Ellington and Hammerstein; virtuoso violinist Brynn Albanese, who is also a member of the well-loved gypsy swing band Café Musique, will perform the haunting “Ashokan Farewell,” by Jay Unger, along with gypsy tunes; and world-renowned organist Katya Gotsdiner-McMahan will dazzle the audience with the mighty Forbes Pipe Organ.

“We’re pulling out all the stops,” Nowak says, “including playing the organ.” A particularly apt phrase, since the metaphor comes from actually pulling out pipe organ “stops,” or knobs, which produce more volume. Just in case you didn’t know.

Unlike typical classical performances, the pops concert is made up of several short pieces, most between three and six minutes long.

Accompanying all these fine musicians will be Suspended Motion Aerial Artists, who climb, spin, twist, and astonish while suspended high above the stage wrapped in long silks.

In combination with the aerialists, Nowak says, “The music I chose is going to make a very dramatic impact on the audience.”

Nowak points out that in a town like San Luis Obispo, the symphony orchestra members are probably people you see every day: your dentist, perhaps, or your banker. His idea in creating the New Year’s Eve show was to appeal to both the classical music lover and those who may have shied away from symphony performances before. “There is nothing heavy at all,” he says, “just a pops-like program. It’s a way to go to the symphony without feeling like you have to know music.

A special pre-concert reception starting at 6:30 p.m. with champagne and hors d’oeuvres is also available. At 9 p.m. (midnight EST), a symphonic countdown to 2014 will take place, featuring the big ball drop in Times Square. Tickets are between $40 and $70 and available at slosymphony.com. 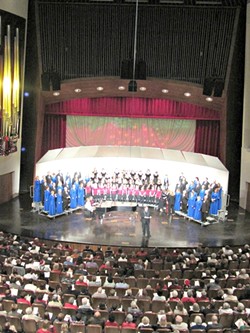 If you can’t wait till New Year’s Eve for power organ ballads, fear not! The Forbes Organ Holiday Concert and Sing-Along is coming your way Sunday, Dec. 22, at 3 p.m. at Cal Poly’s Performing Arts Center. This holiday favorite features performances by the Vocal Arts Ensemble, Central Coast Children’s Choir, and YOU, the audience, singing along to carols played on the magnificent Forbes Pipe Organ by Cal Poly organist Paul Woodring.

Stop by the Snap-Cubby photo booth in the lobby to commemorate the occasion with a keepsake photo. All proceeds will benefit the Performing Arts Center’s outreach programs and the two participating community choirs. Tickets are available at pacslo.org. Prices are $16 for adults and $10 for students.

Back Bay Betty is bringing the funky blues to Cambria Pines Lodge on New Year’s Eve, with music starting at 10 p.m. Dance in the new year at one of the most beautiful venues on the coast. For dinner and reservations call 927-4200, or visit backbaybetty.com. 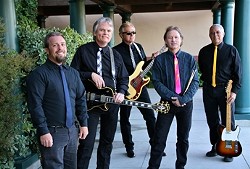 Party like it’s 1969 and sing along with ’60s cover band Unfinished Business on Monday, Dec. 31, at their annual Rock’n’Roll New Year’s Eve Bash. This year the party will be held at the South County Regional Center in Arroyo Grande. Buffet dinner will be catered by Alphy’s Broiler, and the “no-host” bar benefits the Arroyo Grande Knights of Columbus. Dancing starts at 8 p.m. and goes till just after midnight. Door prizes include a drawing for an electric guitar! Tickets cost $75 and include dinner, champagne toast, and if you haven’t already bought yours, you’re out of luck —they’re sold out.

For a New Year’s Eve party with a CaliCubano flair, see the Zongo All-Stars, an Afro-Caribbean dance band, play host to what the band promises will be the biggest NYE party ever in Los Osos! This all-ages show takes place Tuesday, Dec. 31, at the South Bay Community Center with a vintage circus theme. Afrobeat band Captain Nasty starts things off at 7:30 p.m., with circus-themed festivities planned for the East Coast New Year at 9 p.m.; The All-Stars will take the stage at 9:30 and play till the West Coast says bye bye to another year. Then both bands will jam together for the last 30 minutes.

Some transportation will be available for local rides home. See zongoallstars.com or call 441-3344 for more info. 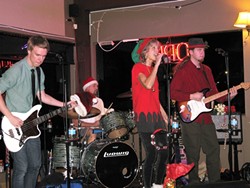 On Thursday, Dec. 19, see “the world’s first and only heavy metal mariachi band,” Metalachi, at SLO Brew at 8 p.m. According to the band’s website, they “twist the unlikely pairing of heavy metal and mariachi into an all-out sonic fiesta so gloriously wrong it can only be right.” Now you don’t want to miss that, do you? Tickets are $12 in advance, $13 at the door.

Rock out to the sounds of the season at the second annual Risky Whippet Christmas bash, set for 7 to 10 p.m. on Dec. 21 at Shell Café in Pismo Beach. This is an all-ages show with no cover, so bring the kids—who won’t be able to sleep, anyway, in anticipation of Santa coming soon—and jingle all the way down. Expect surprises! And a sing-along! Earplugs will be provided! This family band is crazy!

On Thursday, Dec. 26, Reverend Red and Duane Mark will bring rockin’ Americana to the Frog and Peach Pub on their “Outlived the West Tour.” Hailing straight outta Lancaster, Reverend Red has shared stages with Iggy Pop, the Dead Kennedys, and Goddamned Gallows, among others. This threesome (or four- or five-some, depending on the day) have built their following, according to their website, on “old rural America and murder ballads” in shades of rockabilly, country, and punk. Performing with the Rev is Duane Mark & The Get Down Bandits, striking more of a note of traditional and outlaw country. Call 595-FROG (3764) for ticket prices and more info.

Hip hop legends Public Enemy brings the music and message to SLO Brew on Friday, Dec. 20 at 7:30 p.m. with a show that still sends music reviewers searching for adjectives meaning “powerful.” As the venue’s bio points out, “Chuck D’s deep and resolute vocals implore and scold at once while Flavor Flav’s euphoric delivery delights a crowd like no other hypeman can.” Tickets are $40 in advance, $45 at the door.

Last Stage West BBQ will play host to "An Evening to Remember", a dinner and concert to benefit the Central Coast Alzheimer’s Association on Saturday, Dec. 28, from 6 to 9 p.m. Entertainment will be provided by Cuesta Ridge, Pismo Spanky, and BanjerDan. The full-course meal will include wine and beer from sponsors Wild Horse Winery and Toro Creek Brewing Company. Only 40 seats will be sold for this exclusive event, but the concert will also be broadcast live-streaming over the Internet. Tickets are $100, so get yours now.

Minnesota duo The Butchers got their name, according to their publicist, from the enthusiastic and sometimes drunken renditions of the wide variety of songs they played back in the day. But now they are sober, polished, and performing at Frog and Peach Pub on Saturday, Dec. 21. Call 595-FROG (3764) for ticket prices and more info.

Victoria Dale is filling in for Glen while he’s on vacation. Send musical tidbits to gstarkey@newtimesslo.com.