Camille Hoffman: See and Missed is currently on display at the San Luis Obispo Museum of Art through Aug. 22. An accompanying sculpture related to the show's themes is also installed on the grass outside the museum. A "moving meditation" led by instructor Jevon Rowden takes place this Saturday, June 18 (9:30 to 10:30 a.m.; register online at sloma.org). "Mindfulness has scientific support as a means to reduce stress, improve attention, boost the immune system, reduce emotional reactivity, and promote a general sense of health and well-being," event organizers explained.

When you enter the Gray Wing of the SLO Museum of Art, know that it's OK to step on the hand-painted floor, which is as much a part of Camille Hoffman's installation, See and Missed, as the walls surrounding you. Don't be alarmed if your perception feels off, with sky soaring toward the ground and landscape climbing the walls.

"In this specific installation, I'm thinking about landscape as occupying multiple spaces at once, specifically focusing on this relationship between water, land, and sky," the visiting New York artist explained. "For visitors who are entering the space for the first time, my intention is to create a somewhat dreamlike and disorienting experience. These elements are sort of blended together. There's an inversion of landscape as well, and that's all about exploring this experience and feeling of moving between multiple worlds and having a complex identity—a multifaceted identity." 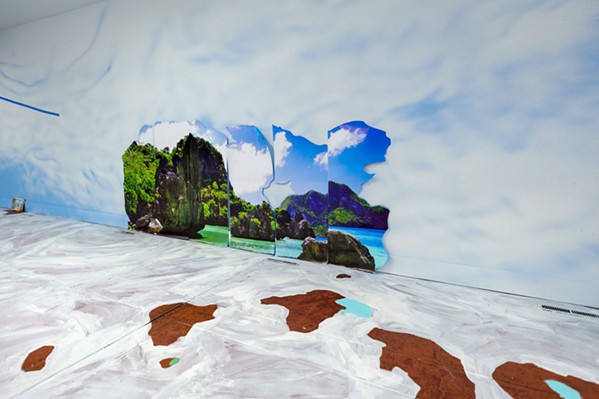 Hoffman, a Filipino-American, is exploring her ancestors' connection to the Central Coast through a mix of painting, collage, and non-traditional materials.

"I'm using giant vinyl stock images of romantic landscapes of the California coast and of the Philippines. I'm also working with nurses' gowns, collage elements, embroidery—looking at all these things as an extension of a deeper history of landscape painting and tying it into my own experience and reflections as a Filipino-American, and in the wake of a deep-rooted colonial history on this land, specifically Chumash land."

That sounds complicated, and it is, but it all coalesced for Hoffman as she began to do research for this new exhibition.

"I think a lot about history, and research becomes a certain guidepost and a thread I follow as I make my work," she explained. "It informs where I put my work up, the images that I choose, the materials that I choose, and the kind of conversations I ultimately have as the work progresses."

Hoffman noted, "It's very important to me that when I'm invited to a place, before I even begin the work, I research whose land am I on, what is the history of this space, and what is the history of this space in relation to my own ancestors? It's a kind of way of orienting myself and also paying respect. It's ultimately what becomes content for the story that I want to tell, or the story that's being asked to be told."

As she began her research, Hoffman discovered the Filipino local connection stretched back centuries.

"I know that Filipinos have agricultural history here dating back to around the time of the Great Depression, but then I learned the first documented landing of Filipinos [on the continental U.S.] took place in 1587 in Morro Bay, which is only 15 minutes away from this museum."

Hoffman had recently completed a show in New York on Governors Island called Landing for Lolo, which was "honoring the seafaring history of my family in relation to my grandfather who fought in World War II on a naval ship, and that work took place on a former U.S. naval base. I thought, 'This [Central Coast show] is the next chapter of this story that I want to reflect on,' and what better place to do it?"

The Philippines was a Spanish colony for 330 years, and Spanish galleons were often built and manned by exploited Filipino workers. Part of these trade missions was about "discovering" new territories for Spain. The ship that arrived in Morro Bay was called Nuestra Senora de Buena Esperanza (Our Lady of Good Hope), captained by Pedro de Unamuno and crewed by Luzones Indios, as they were called. Only later did they become known as Filipinos after their country was named the Philippines in honor of King Philip II of Spain.

To fully understand See and Missed, this history is important.

"It's central to the work," Hoffman said. "I'm an artist. I have a historical bent to my work, but I'm not a historian. I'm not a writer, but my intention as an artist is to create an experience and a space that evokes a feeling that invites visitors to ask deeper questions."

The show also connects to the larger legacy of Filipinos in the U.S., for instance Hoffman's use of nurses' gowns. Estimates say about 4 percent of U.S. nurses are Filipino-American, though Filipinos comprise just more than 1 percent of the overall U.S. population. In California, nearly 20 percent of registered nurses are Filipino. Hoffman is honoring this long history of service.

In the middle of her installation is a boat-shaped bench.

"This bench is a poetic allusion to one of the oldest Filipino balangay boats excavated near the island where my grandfather grew up in the Philippines," she explained. "The ship is dated to 320 A.D. and was big enough that it could have accommodated 100 people at one time. They call it 'The Mother Boat,' and it accentuates the sophistication of our seafaring history."

The shape is also similar to Chumash canoes, called tomol—a serendipitous connection. Hoffman also uses piña cloth, made of the pineapple plant, traditional to the Philippines after pineapples were introduced to the island through colonialism.

"The sculpture that's going to live on the lawn of SLOMA is also an homage to this history," she explained. "I'm referencing historical photos of Filipinos with a special focus on agricultural workers and nurses. It's very layered, and it's meant to be luminous. It's going to be lit from within, and also the natural landscape surrounding it and the natural light will shine through."

The sculpture is about "the legacy of Filipinos as part of the U.S. story—it's an American story I'm telling, though not necessarily one that's been included and accentuated." In essence, it's a "monument" to the Filipino workers in the U.S. that "work behind the scenes and make up the fabric of our society and economy but don't necessarily get the recognition that they deserve." Δ