Maria Garcia, one of the co-founders of the Hispanic Business Association in Paso Robles, a pharmacy technician, and a saleswoman for Mary Kay Cosmetics, said she is running to bring a diverse voice and representation to the council. Garcia moved to Paso Robles from Texas about 12 years ago and wants to improve public safety, economic development, and quality of life for residents. 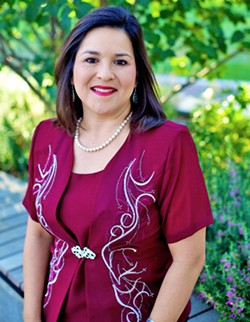 Garcia said she's created a connection with her community through her jobs—especially with the business association.

"I'm helping so many people not just fulfill their dreams but I'm also helping Paso's economy stay afloat," she said.

Andy Pekema, owner of Amendment Development (which makes home décor out of run-down pianos) and a Central Coast native who recently moved to Paso, decided he would run after he noticed how upset his neighbors were over the city's roads.

"I strongly want to put more focus on getting our roads into a reasonable condition," he said.

Candidate Michael Rivera has served on the Santa Maria Recreation and Parks Commission, Santa Barbara County Private Industry Council, and as a planning commissioner for the city of Guadalupe. He is listed as the secretary for a Santa Barbara-based organization called Californians for Population Stabilization.

According to the organization's website, the mission of the group is to "work to formulate and advance policies and programs designed to stabilize the population of California." The Southern Poverty Law Center lists the organization as a hate group.

Rivera did not respond to New Times' request for comment before press time.