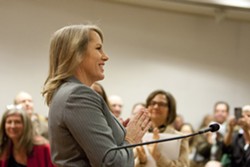 After months of curiosity and speculation over a seat left vacant all summer long, San Luis Obispo County has a new 4th District supervisor.

Gov. Jerry Brown selected Caren Ray, who served on the Arroyo Grande City Council before her appointment, after a long, thorough process. Ray’s appointment was announced Oct. 3, and she was sworn in Oct. 8 in front of a very crowded chamber.

The seat in question has been vacant since Supervisor Paul Teixeira died from a heart attack in June, leaving the remaining supervisors occasionally split on key issues.

Ray opened her comments at the meeting by honoring the memory of Teixeira, offering her regards to his family for their loss and acknowledging her appointment as the resolution of “months of silence that left us in a frustrating political limbo.”

“I want to tip my hat to each and every person who applied for this position,” Ray said. “It takes guts and a true love for service to put your hat in this unforgiving ring.”

Prior to Teixeira’s election in June 2010, the seat was occupied by Katcho Achadjian until he was elected to serve in the state Assembly. The seat has long been perceived as a swing vote—often toward pro development—in the district. Ray will likely be the deciding vote on some upcoming controversial items, and locals are already speculating on which direction she’ll lean.

Ray’s supporters have characterized her as an independent thinker who makes decisions based on the facts before her, a reputation that Arroyo Grande Mayor Tony Ferrara says has garnered her a lot of respect.

“I have nothing but admiration for the way she has performed on the city council. She is a very thorough, very professional person, and very, very capable,” Ferrara told New Times. “I think that her colleagues on the Board of Supervisors will come to realize that while it’s probably perceived as a swing vote, her vote will be what Caren Ray thinks is right, and not the vote that people expect her to do.”

To symbolize her commitment to “balance and nonpartisanship,” Ray recommended before the meeting that the supervisors mix up their seating arrangement—supervisors Frank Mecham and Debbie Arnold sat on the left and Adam Hill and Bruce Gibson (the board’s chair) sat on the right—illustrating a divide that’s often present in controversial votes. Per Ray’s recommendation, Supervisor Gibson now sits in the middle as chair, but supervisors Hill and Arnold now sit on the right and Mecham and Ray are on the left. Among the accolades and offerings of support Ray received from her new colleagues was an appreciative observation from Mecham.

“This is obviously a great setting, because we have two roses with the three thorns on the inside,” he said.

The governor kept his cards close throughout the summer as SLO County residents waited for news. In recent weeks, there were rumors of three, maybe four, candidates who’d been flown to Sacramento for a face-to-face interview with the governor. Members of the press weren’t the only ones frustrated with Brown’s refusal to disclose any hints; county residents and politicos have been inquiring, postulating, and keeping up on the word on the street as they tried to predict what a potential appointment—or a continued vacancy—would mean for items coming before the board.

The hottest issue was a tabled urgency ordinance prohibiting new and increased water use from the Paso Robles Groundwater Basin, where declining water levels have brought dried residential wells and an uncertain future for the viticulture industry. A 45-day urgency ordinance was passed Aug. 27, but the supervisors failed to extend the moratorium on increased water use for a full two-year period at the Oct. 1 meeting when Supervisor Arnold voted against its extension. The supervisors ultimately did pass the ordinance on Oct. 8 with a yes vote from the new supervisor.

Ray, who teaches history, government, and economics at Santa Maria High School, left her seat on the Arroyo Grande City Council to become supervisor. The current status of her teaching position is unclear. Her district encompasses Nipomo, Arroyo Grande, Oceano, and Huasna Valley, and extends east along Hwy 166. The seat will be up for election in 2014. Ray is the sixth woman to serve as supervisor since the seats were created in 1854.

As Ray concluded her short words of gratitude, she demonstrated her commitment to a new chapter of public service with a twist: “This weekend I went to my mailbox and found that this universe does really have a sense of humor—a jury summons,” she said, holding up the brown envelope.

“Now, Chair Gibson, let’s get down to business.”

New Times contributor Jono Kinkade can be reached at jkinkade@newtimesslo.com.