Central Coast community members took to social media to express their sentiments on the prospect of the Camp Roberts Army National Guard base becoming the eighth site to house unaccompanied migrant children in California. 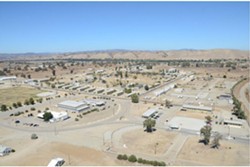 In an April 1 briefing, Pentagon spokesman John Kirby confirmed that the Department of Health and Human Services sent requests to the Department of Defense to use Camp Roberts and the Long Beach Convention Center in Southern California.

During the briefing, Kirby declined to confirm how many children could be housed at the Camp Roberts site.

On social media, Central Coast residents were evenly split in their comments on the potential use of Camp Roberts.

Facebook user and SLO County resident Lisa Lo Vece Borges said, "Meanwhile all the homeless are living in the surrounding riverbeds! As an Independent, I am so disgusted with the Democrats in office and how they are destroying the state and country!!!"

"These children are in an extremely vulnerable position. It feels that this is the right thing to do regardless of the controversy this may raise," the letter stated.

According to U.S. Customs and Border Protection's most recent statistics, authorities encountered more than 29,010 unaccompanied minors from October 2020 to February 2021.

In March, U.S. Rep. Salud Carbajal (D-Santa Barbara) visited Texas' Carrizo Springs Influx Care Facility that the U.S. Department of Health and Human Services is authorized to use as a holding facility for unaccompanied migrant children.

Carbajal told New Times that unaccompanied minors who seek refuge in the United States should, at the very least, be treated humanely while they're being processed.

At his recent visit to the Carrizo Springs facility, he said he saw a safe and orderly facility where children were afforded medical care, given educational and legal services, and were extended basic human rights.

"Treating children humanely should not be a partisan issue. I commend the Biden administration for working quickly to evaluate sites across the country that are suitable for children, including Camp Roberts, to alleviate overcrowding and ensure children receive adequate care while in U.S. custody. If Camp Roberts is selected, I'll be monitoring conditions at the facility closely and will work with the administration to ensure proper resources are provided," Carbajal said. Δ