I almost saw some burlesque!

It’s Friday, Nov. 16, and my wife and I are standing at the end of a long line of people waiting to get into The Z Club for a performance by SLO Tease, a burlesque troupe. Suddenly I see Executive Producer Rick Castello working the line, greeting people and shaking hands. As he arrives I feel his chest to see if there are pasties under his shirt.

“I’m not planning on taking off my top,” he says.

It looks really good with his blue sequined vest.

“I tried to find matching underpants,” he adds.

“They didn’t come in extra large?” I asked.

“They didn’t come in extra long,” he says.

“Extra schlong?” I counter. You know, just trying to get into a burlesque sort of mood! 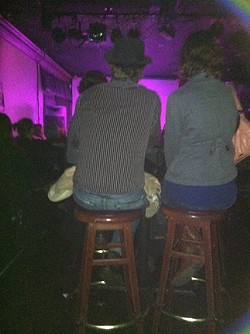 We finally get inside and my wife Anna and I order some very expensive drinks and sit down at our seats, which are high stools at high tables behind other high stools and high tables. I can’t really see much of the stage, but there’s a guy in front of me with a really nice hat.

The show finally gets going about 10 minutes late, at 9:40 p.m. Director Laurel Mitchell comes out on stage to explain the rules, saying, “I love rules and I love people who follow them,” to which some guy yells out, “What’ll you do to us if we’re naughty?” which Laurel ignores and instead reminds us, “Look but don’t touch, no photography, and have a fucking good time.”

Then a couple guys come out and hang a big ring from the ceiling, and then a couple healthy-looking blonde gals come out and start very athletically playing around on the ring and slyly removing each other’s clothing, all while a strobe light pulses to the music.

After that number, Rick comes out and says something, but I can’t quite make it out, and neither can some girl behind me, who says, “What! What’d he say?”

Then if I peer really hard between the two people in front of me totally blocking my view, I can see a girl take off her knee socks and start spinning them around. Then she does a back handspring.

A song about madness comes on and two girls go into a capoeira routine, you know, that Brazilian dance-fighting thing. It’s all pretty hard to make out, because, you know, I CAN’T SEE A FREAKING THING!

Then another gal comes out and I get my first pasties sighting of the evening, They’re orange and sparkly, and every once in a while, if I cock my head and the two people in front of me lean away from each other, I see them.

“This would be a lot better show if we were in the front,” says Anna.

“Um, yeah!” I say, but then three girls walk through the crowd and take the stage, and then do some stuff I can’t see. Then a girl in a cowboy hat comes out and appears to pretend to sexily “ride” a sawhorse, I think—all I can see is the top of her hat going up and down.

Something good must be going on, because the people in front of us who can see it seem pretty excited.

Then a tango version of The Police song “Roxanne” comes on, and two girls and two guys come out to do a number. I can kind of see what’s going on when the girls climb on the shoulders of the guys.

Then Queen’s “Killer Queen” stars playing and stuff I can’t see apparently happens because people in the non-shitty seats are clapping.

Finally, a gal with an awesome voice and a sparkly red dress comes out and sings “Why Don’t You Do Right?” I enjoy it immensely while staring at the silhouette of a hipster in a hat, pull out my cell phone and illegally snap a photo to prove how horrible my seats were, and then it’s intermission and Anna and I decide to hit the road.

Thankfully my tickets were free, and worth every penny.