“Now wait a minute, chief. I was trying to look up the NYC electro Latin soul act Si*Sé, see?”

“It’s about mixing stuff up that’s not usually mixed together,” Carol C said in press materials. “We’re a band from New York City, and we try and combine all of its musical traditions, including hip-hop beats, Latin rhythms, and down-tempo electronic music, because that’s what we hear every day of our lives. It’s a prelude to the future.”

Carol C sings in both Spanish and English—her family hails from the Dominican Republic—and she’s 100 percent sex and soul.

Together they create a diverse but infectious sound, and they put on an awesomely engaging live show.

“It all comes naturally for me,” Carol C added. “It would probably feel weird and unnatural if we decided to stick to one genre or style. I grew up listening to Stevie Wonder, Bill Withers, Donna Summer, Julio Iglesias, Blondie, Depeche Mode, and The Police. They never fit into one genre—pop, rock, or country. As a kid I was really drawn to Stevie Nicks. She evoked a magical and mysterious persona that mesmerized me.”

Added Cliff, “For our cover of ‘The Chain’, we didn’t just want to replicate the original. We wanted to add a gritty modern feel, incorporating electro, dub, and even rock all into one. When I’m creating a track, I usually let my mind run free, never limiting myself by genre.” 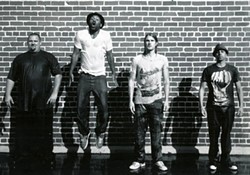 There’s naturally a whole lot more going on at SLO Brew this week (it’s finals week at Cal Poly; studying’s for losers!). On Thursday, June 9, world music and groove rockers Rey Fresco return (7:30 p.m.; all ages; $8 presale or $10 at the door). The group is inspired by a 36-string Veracruz harp.

On Friday, June 10, local favorite Still Time, a band that formed at Cal Poly, plays a graduation party (7:30 p.m.; 21-and older; $8). The group continues to churn out great records, most recently the EP Call It What You Want, a five-song collection that sounds influenced by Ben Harper or Dave Matthews. The second track, “Finally Found a Home,” veers off into trippy, rough-around-the-edges psychedelic territory. These guys keep getting better and better.

Hip-hop star Warren G plays the club on Saturday, June 11 (7:30 p.m.; 21-and-older; $20 presale or $22 at the door). For the uninitiated, “Born Warren Griffin III, Warren G. exploded out of the burgeoning Long Beach rap scene in 1994 with the smash single ‘Regulate,’ a duet with longtime friend Nate Dogg, and its accompanying album, Regulate...G Funk Era,” according to his bio.

Surf guru and folk hero Donavon Frankenreiter returns with his groovy sounds on Monday, June 13 (7:30 p.m.; all ages; $22 presale or $25 at the door), with Seth Pettersen opening the show. He’s got a deep catalog of material from which to draw, and, as he says, “We don’t have a set show; if we did, I would go crazy. You never know what’s going to happen. I love that element of surprise with music and surfing—you never catch the same wave twice.”

Finally, on Wednesday, June 15, catch some hip-hop with Aesop Rock and Kimya Dawson (8 p.m.; all ages; $18 presale or $20 at the door). “The show features solo sets from each, as well as collaborative pieces,” said their publicist, Thomas Fricilone. “Rob Sonic and DJ Big Wiz will join Aesop on stage to perform a few tracks from their latest release as Hail Mary Mallon as well. Definitely going to be an interesting night—not one to miss.”

It looks like there’s an extra treat in store for singer-songwriter fans.

“I just found out that Andrew Hardin is touring with Paula Held, our featured act at The Porch on Thursday, June 9,” said Steve Key, founder and host of the Songwriters at Play showcases. “I’m a fan of his work with Tom Russell, who he backed for more than 20 years.”

Paula Held hails from Austin and is making her first Central Coast stop, touring in support of her debut album Drive, which draws from the music of early jazz standards and ’60s folk icons.

This show starts at 6:30 p.m. (all ages; pass-the-hat), and, like all the showcases, includes several other performers doing four-song sets.

One of L.A.’s favorite singer-songwriters, Lindsay Tomasic, will headline Sculpterra Winery on Sunday, June 12 (1 p.m.; all ages; pass-the-hat). Her music has appeared in TV shows such as Desperate Housewives, Brothers and Sisters, and Malcolm In the Middle.

Andy Gullahorn is the featured performer on Tuesday, June 14, at Kreuzberg (6:30 p.m.; all ages; pass-the-hat). He’s the Kerrville New Folk songwriting winner, a Texas native with a “knack for finding spiritual truths in the ordinary everyday occurrences of life,” according to co-promoter Bonnie Nelson. “Insightful and funny, his music speaks volumes to the everyman experience.” 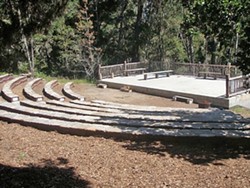 Since 1946, Camp Ocean Pines in Cambria has been a peaceful and educational retreat for thousands of happy campers.

“In the last 10 years, we’ve made major improvements,” said Executive Director Chris Cameron. “A key development is a great outdoor amphitheater stage and seating. Set in the forest, within seal-bark sound of the ocean, a couple hundred volunteers helped in the creation of this whimsical amphitheater. It’s been a labor of love for many locals! We’re having this singer-songwriter benefit to polish off the final touches.”

“The main use of our amphitheater will be as an ‘opening’ or ‘closing’ night performance from one of our educational retreats,” Cameron continued. “For example, the performers for this June 10 concert are the staff for the following week of singer-songwriter camp for adults.

“We’re a nonprofit environmental nature and arts camp. People stay in straw bale cabins and eat excellent meals in a dining hall with a 180-degree view of the ocean. Deer, squirrels, and birds cruise through our forest, adding to the natural sounds. You can stand on the deck and watch the whales migrate by. It is a pretty fine place.”

Singer-songwriter Dan Krikorian will play The Pour House at 8 p.m. on Thursday, June 9, as part of his tour supporting his new record, Windsor Blue. Dan was recently chosen as “Songwriter of the Day” by The Ruckus music blog. According to his press materials, “Costa Mesa singer-strummer Dan Krikorian has been charming crowds with his mellow melodic songs for a couple of years now. His latest musical venture, Windsor Blue, is a shift from his earlier musical styles to more adventurous and weightier folk tunes, with influences ranging from classic literature and iconic figures such as Bob Dylan, to the talents of modern musicians including Joe Purdy and Josh Ritter.”

Guitarist Tom Smith plays Last Stage West on Friday, June 10, from 6 to 9 p.m. (Call 461-1393 to make a dinner reservation.) His playing has been called everything from “neo-impressionism” to plain old “good guitar playing,” and he’s influenced by jazz, country, classical, and blues. 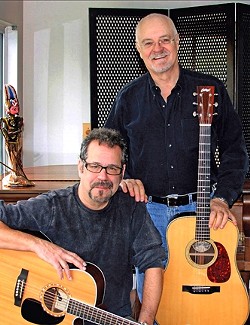 Cliff Eberhardt and James Lee Stanley will perform at the next Música Del Río House Concert in Atascadero on Friday, June 10, at 8 p.m. ($20; call 466-6941 for reservations). “Cliff Eberhardt and James Lee Stanley will be together at Música Del Río … and for very good reasons,” said organizer Fred Munroe. “These are two of the most gifted acoustic musicians we have ever had the pleasure of presenting. And their slant on folk music in a rock ’n’ roll world will help you better understand how groups such as the Doors and the Rolling Stones rearranged the boundaries.” The two are responsible for All Wood and Doors, an acoustic interpretation of the works of the Doors, which included participation from original Doors members Robby Krieger and John Densmore. 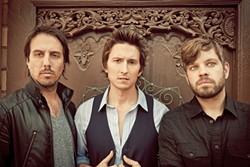 Awesome salsa band De La Bahia will be performing at the Otter Rock Cafe on Saturday, June 11, from 9 p.m. to midnight. Prepare to dance your booty off.

The Arroyo Grande Village Summer Concert Series kicks off on Sunday, June 12, with a “history of the blues” show starring Valerie Johnson, Al B. Blue, Karen Tyler, and more. “This summer’s series will feature a historical theme in keeping with the Arroyo Grande Centennial Celebration and will feature a different decade of music and culture from the past 100 years,” said promoter Curtis Reinhardt. The free, all ages concert starts at 1 p.m. “Hear the blues as it was played in 1910, featuring piano, guitar, banjo, washboard, and other primitive percussion. The first half of the program will showcase music from that era, accompanied by stories about the songs, songwriters, and instruments that created it. The second half of the program will trace the progression of the blues from 1910 to the present.”

Fresh off her East Coast tour, the amazing Inga Swearingen returns to SLO Town on Saturday, June 11, for a show at Steynberg Gallery before she continues touring the West Coast. The busy bee continues to tour in support of her refreshing album First Rain, which contains the track “Brick by Brick,” which won top honors at last summer’s New Times Music Awards. She’s also recently been in Laurel Lane Studios with her friend Damon Castillo, where she recorded “Find My Way.” Watch her YouTube video at youtube.com/watch?v=4cZKH3uuQ2I.

The Grover Beach Parks and Recreation Department has another free Sizzlin’ Summer Concert for you on Sunday, June 12, from 3 to 6 p.m. in Ramona Garden Park when The Shival Experience will bring its reggae and blues rock to the charming amphitheater. Bring a blanket or lawn chair to kick back on the grass, enjoy a glass of wine or beer, and dance or just listen to the great music. You can also shop for freshly grown fruits and vegetables, freshly canned jams, jellies, and salsas, fresh flowers, and plants, and much, much more!

Robert Jon and the Wreck play Frog and Peach Pub on Tuesday, June 14, at 10:30 p.m. The band’s been recording a new album, and this show is the first of their upcoming West Coast tour. This gritty, guitar-driven rock act throws in just enough funk and blues to keep things interesting.