Nick Offerman brings his stand-up and music to Vina Robles Amphitheatre on Oct. 12

I've got actor, comedian, and manly-man woodworker Nick Offerman on the phone, and after our "good mornings," I say, "I hear you were just on NPR."

"Um, yeah, that's the rumor. If I make the cut. We'll see," he responds in that laconic, distinctive voice. 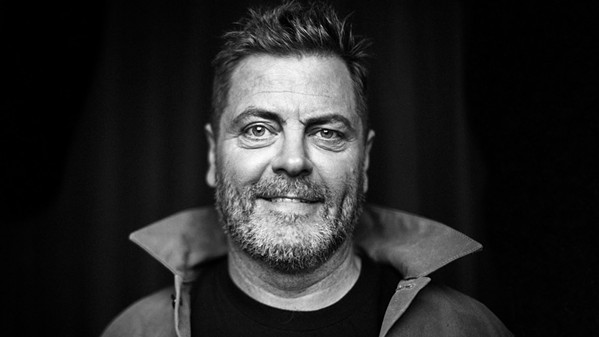 "Well, this interview will be a lot less professional, prepared, and good," I say.

"Sounds like you're my people," he deadpans without missing a beat.

It turns out I am his people. We both grew up in the Midwest and were raised by hearty Christian stock. His stolid persona has been his hallmark. Is it carefully cultivated or just his personality?

"Ha-huh-ha! Well, I guess I'm not aware of having cultivated my personality at any point, so I guess this was just the hand of cards I was dealt," he said. "I've always tried to emulate my dad in a lot of ways. He gets along well with everybody. People seem to like it when he shows up. So I just try to mind my manners and, ah, and behave like him."

Offerman was dealt a pretty good hand. He gained success in Chicago, where he worked with famed theater companies Goodman, Wisdom Bridge, and Steppenwolf—the latter of which he not only acted for but also staged fight choreography and worked as their master carpenter.

He soon was doing TV shows such as Will & Grace (in 2003, he married the show's co-star, Megan Mullally), The King of Queens, 24, and The West Wing. Of course, he's best known for his award-winning role as Ron Swanson on the NBC sitcom, Parks and Recreation.

"The incredibly fascinating backstory—this may be the first time it's getting out—I was offered a different role that I think was called 'Weed Cop' in that movie, and instead of one line I think it was five lines, and I was over the moon because I would get to speak five lines about marijuana to Sandra Bullock," Offerman remembered. "Turned out the schedule was when my wife and I had our first ever romantic trip to Paris planned. I couldn't believe it. I had to call up and say, 'I can't play Weed Cop because I want to stay married.' So they gave me that other part instead because the director liked me."

This Saturday, Oct. 12, Offerman will be doing his social commentary stand-up, with some country ballads he's written mixed in, at Vina Robles Amphitheatre (8 p.m.; all ages; $41.75 to $61.75 at vinaroblesamphitheatre.com).

"The first song is called 'We Fucked it Up,'" Offerman said as he tried to describe his show. "It's sort of an overview. We've come so far as a species, and for some reason we've apparently decided to turn around and head back the other way. There's a song called 'I'm No Scientist,' which is making fun of the quotient of humanity that chooses to ignore irrefutable science. There's also a song poking fun at consumerism and homophobia at the same time in the form of an advertisement for my cologne. Things like that. Instead of trying to be particularly partisan or political, it's taking a step back from the fray and looking at all of us and making fun of us for getting ourselves in this mess."

As for his famed tough-guy persona, he had this to say: "I was brought up in a family of mostly farmers, so when people accuse me of manliness or machismo, I say, 'Well, you should meet my sisters. They could wipe up the floor with me.' I never feel macho, but I do try to be dependable, and I don't suffer fools gladly, but I'd always rather hug somebody than punch them."

The iconic downtown SLO deco theater starts its week with Electronica artist Manila Killa this Thursday, Oct. 10 (doors at 8 p.m.; all ages; $27.31 general or $85.96 VIP meet and greet), with Myrne and Ramzoid. Manila Killa started tooling around on GarageBand in middle school back in late 2009. Now he's a worldwide phenom!

Reggae fav Collie Buddz returns on Friday, Oct. 11 (doors at 8 p.m.; all ages; $33.17 at Boo Boo's or fremontslo.com), with Keznamdi. The Bermuda Islands-raised performer is touring in support of Hybrid, released last spring.

The SiriusXM Coffeehouse Tour featuring Joshua Radin & The Weepies comes to the Fremont on Saturday, Oct. 12 (doors at 7 p.m.; $44.90 to $54.29 at Boo Boo's or fremontslo.com), with Lily Kershaw. Radin is touring in support of his newest, Here, Right Now, that was just released on Oct. 4. Kershaw is touring in support of her 2018 EP, Lost Angeles.

Greg Loiacono (of The Mother Hips) plays next Thursday, Oct. 17, at The Siren (7 p.m.; 21-and-older; $15 presale at Boo Boo's and eventbrite.com or $20 at the door), with openers Scott Hirsch and Lauren Barth. Should be a great evening of folk, pop, and rock.

Three at the Rock

"Dust off those lederhosen and dirndls, the tradition of Rocktoberfest returns ... for a night filled with laughter, Stein Slammer beers, German specialties, Biergarten games, and live performances from local favorites, Miss Leo & Her Bluegrass Boys and Trio Internationale," according to the promoter.

Singer-songwriter and multi-instrumentalist Kishi Bashi (née Kaoru Ishibashi) plays the Rock on Saturday, Oct. 12 (8 p.m.; 18-and-older; $20 at slobrew.com), with guest Takenobu opening. Bashi is touring to support his latest, Omoiyari, "a thoroughly researched art piece that reckons thematically with the country's past internment of Japanese-Americans during World War II, exploring the parallels between 1940s America and the current U.S. administration's constant talk of walls and bans," press materials described.

Noah Colton embodies the Post-Millennial zeitgeist, the Gen Y self-awareness of being raised in the info age of social media, screens, and zero privacy. The songs on his debut EP, Don't, reflect the complications of contemporary life.

The local singer-songwriter used to be a member of Spaces Between, but now he's released this four-song personal project that closes with the wonderfully sophomoric dorm-room philosophy of "The Cheap Outdated Self-Discovery," on which he sings, "Eyes burning red, strike the chord and see the ceaseless call with the subtle draw that seems to beckon me. Begging for release, intentions meant to please, the age-old test for the second best still good enough to be the cheap outdated self-discovery for the existential next recovery from a pain mistaken image of me."

The Carolyn Sills Combo plays on Saturday, Oct. 12 (12:30 p.m.; all ages; free), at the Concert in the City Park Gazebo for Paso Robles' 89th annual Pioneer Days Parade. Sills grew up on Marty Robbins' classic, "El Paso," that goes like this: "Out in the West Texas town of El Paso." She'll reimagine it with her song, "Return to El Paso," along with other western originals and covers in Sills' signature "Spaghetti Western Swing" style.

It's time for the Morro Bay Sings 11th anniversary fundraiser this Saturday, Oct. 12, at the Morro Bay Community Center (doors at 5 p.m.; dinner from 5:15 to 6:30 p.m.; music starting at 7:15 p.m.; all ages; $50 tickets include food, at communityfoundationesterobay.org/events). This time around, hear songs of The Beach Boys from Jody Mulgrew and VOIX (an a cappella group with members from the Cuesta College VOCE group).

Vote for your favs!

The New Times Music Awards Readers Choice contest is up and running! Vote for your favorite artist here. Tickets are on sale now for the big event on Friday, Nov. 8 (6 to 10 p.m.; all ages; $15 general, $10 students, veterans and active-duty military personnel free), at the SLO Brew Rock Event Center.